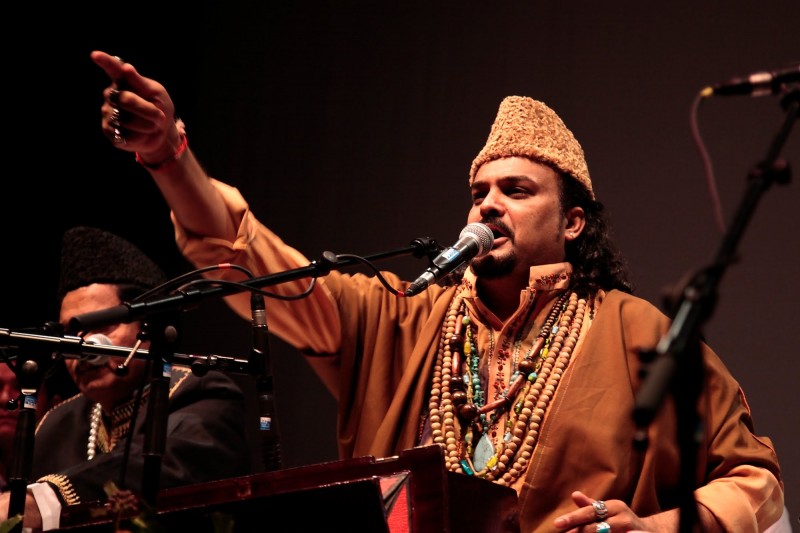 Amjad Sabri sings at a concert in February 2012 in Trafo, Budapest. Screenshot from YouTube

Amjad Sabri, one of Pakistan's most renowned qawwali performers, was shot dead by gunmen in the southern port city of Karachi, triggering an outpouring of grief across the country. Qawwali is a form of Sufi devotional music popular in South Asia.

The police are calling the attack “a targeted killing and an act of terrorism.” Sabri, 45, was shot five times on Wednesday afternoon, in the city's Liaqatabad area, after gunmen on a motorcycle pulled up to his vehicle and opened fire. Qari Saifullah Mehsud, a spokesperson for a splinter group of the Pakistani Taliban, claimed responsibility for the attack.

Amjad Sabri was one of the most sought-after qawwals in the country. Sabri came from a family of musicians. His uncle Maqbool Sabri and his father, the late Ghulam Farid Sabri, formed an iconic qawwali group in the 1950s and became known for their soul-stirring renditions of mystic poetry.

Amjad Sabri was keeping the family tradition alive and was leading a movement to make qawwali more mainstream following in the footsteps of legendary musician Nusrat Fateh Ali Khan.

In the aftermath of Sabri's assassination, social media in Pakistan was full of grief and fury at the brutal killing of the icon in the Islamic month of Ramzan, also known as Ramadan.

Fakhre Alam, singer, songwriter and head of the Pakistan censor board, tweeted:

Law Enforcement has failed us. All this garbage of high level meetings is bullshit. No one is safe here. I am heart broken & disgusted

Publisher and journalist Najam Sethi expressed his grief and sorrow on Twitter in the following words:

Terrible loss of Amjad Sabri. His voice touched so many hearts & souls across the globe. Let's not be numbed by these murderous terrorists.

As news of his death stirred an uproar all over Pakistan, gory images and videos of his body at the crime scene started to surface online. Jibran Nasir, a civil society activist, suggested caution and protested the circulation of gory images on Twitter:

Plz show respect to #AmjadSabri & family. Stop sharing graphic videos/images. Remember him as the big man who moved millions with his voice

Shehzad Ghias Sheikh an improv and standup comic and actor, remembered the death of Karachi's cultural icon Sabeen Mehmud, who was gunned down last year, in this post:

Countries can be won through war but if you want to defeat a nation, you have to kill the artists, thinkers, scholars and lovers. Amjad Sabri has been brutally murdered on the streets of Karachi and the condolences are pouring on from all over but soon he will just be another number on the long list of the deceased for no rhyme or no reason.

Sabeen Mahmud died on the same streets, Wasim Akram's car was shot at and Hamid Mir was almost gunned down. These are just a few of the reported crimes. There are even more which go unreported. One of the most prominent actors in Pakistan was recently kidnapped and held at ransom. Just yesterday, the son of the sitting Chief Justice of Sindh was kidnapped.

Can we rest the notion that Karachi is now a safe city? How long will we lie to ourselves just to protect our “reputation on the international stage”?

We have death threats against a prominent media personality floating freely on social media these days. Would we mourn him if some psycho acts on them?

Did we do anything to stand against the multiple death threats received by Amjad Sabri when he was accused of blasphemy for singing a famous qawali just because Geo and ARY were in a war with each other?

We do not know why Amjad Sabri was murdered. Honestly, does it even matter?

As a fellow member of the artist community, I can testify that there is hardly an artist in this country who has not received a death threat for some reason or the other.

When artists do not die in Pakistan from a bullet; they die from our indifference. Habib Jalib and Mehdi Hasan died because they could not afford better treatment. Let that sink in people.

Amjad Sabri is dead and people are sharing videos of him dying and bleeding in his car on social media, this is the country we live in.

If you're looking for a reason as to why he died. You won't find one, if someone asks you ‘Why’, just say “Because…Pakistan”.

The government of Pakistan, spurred on by the uproar all over the country, has started arresting suspects and have vowed to arrest the killers. The chief minister of Sindh, Qaim Ali Shah, suspended District Superintendent of Police Liaquatabad and Station House Officer Liaquatabad following the incident.

Salman Ahmed, a famous guitarist, shared his frustration over the apathy and frustration in the following tweet:

The PM & Sindh Gov't is sorry about #AmjadSabri‘s murder…. are we all just lambs for the slaughter?No leadership,No plan & Zero competence

The killers of Sabri might be found because there is pressure on law enforcement to seek justice. However, the writing on the wall in Pakistan is clearer than ever: the space for arts and culture is shrinking in the face of a rabid assault by radicalisation and violence.