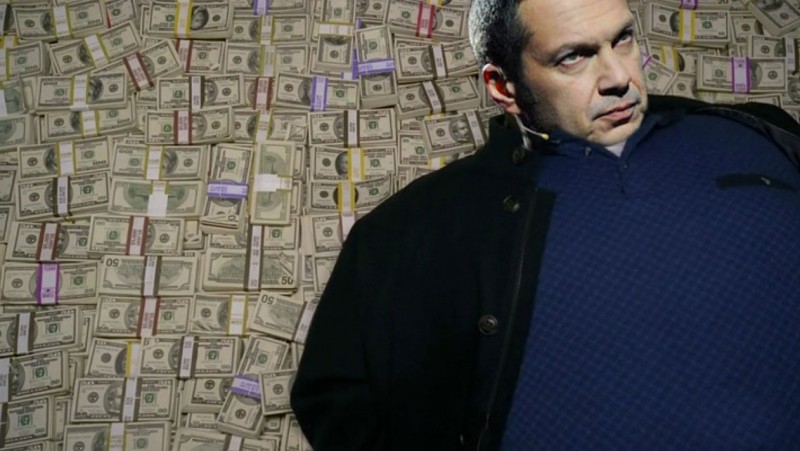 Vladimir Soloviev on his pile of hard-earned money. Image by Kevin Rothrock.

Earlier this month, on June 10, one of the Russian Internet’s most popular parody accounts drew attention to the journalist Vladimir Soloviev, who was spotted at a Moscow airport boarding a plane to Rome. The parody account tweeted, “Propagando Vladimir Soloviev flew to his villa in Italy, a country in the aggressive NATO bloc. But the national-traitor is you!”

Soloviev is one of Russia’s most recognizable television and radio hosts. Like nearly everyone so prominent in the Russian media, he’s generally sympathetic to the Kremlin, scoring, for instance, the first interview with Vladimir Putin after the beginning of Russian airstrikes in Syria last fall.

With 1.42 million followers on Twitter, Soloviev is also uniquely willing to talk to totally random people on the Internet, often entering into long arguments with people who tend to be very unhappy with him.

This past weekend, on June 19, he wrote at least a dozen messages to a man named Petr Zamkovoi, who claims to live in Rostov-on-Don, a port city near the Sea of Azov. Zamkovoi has just 111 followers (up from 33, last week), but Soloviev took the time to lecture him about the merits of hard work and providing for one’s family.

Vladimir Soloviev [addressing all his Twitter followers]: Where do you like to go on vacation and why?

Petr Zamkovoi: I stay at home because there’s only enough money for food and the utilities, but you hang in there… [This is a reference to a recent meme inspired by awkward comments by Russian Prime Minister Dmitry Medvedev.]

Vladimir Soloviev: How old are you?

Vladimir Soloviev: So work more, and provide your mom with dignity in her old age. But you’d rather play at “oops,” instead of working up a sweat.

Petr Zamkovoi: Yeah, not really, Vladimir. I had my own business, and I worked my butt off 24 hours a day, but the guys from the OBEP [Russia’s police department that combats economic crimes] didn’t like it too much. They saw to some things…

Vladimir Soloviev: And these guys just showed up? Or did they have a reason to come? Or is this now your excuse for not earning more money and not supporting your family?

Petr Zamkovoi: In this regime, there’s always some reason. On one side, you’ve got serfs, and on the other, there are the lords.

Vladimir Soloviev: Now you’re just babbling. So you were working “in the gray” [declaring only part of one’s earnings to the government for tax purposes]

Petr Zamkovoi: And these conditions were created specially—so everyone would be holding [cash] and handing it out to everyone.

Vladimir Soloviev: Created by whom? The choice [to report your earning] is always yours.

Petr Zamkovoi: Vladimir Vladimirovich Putin personally, and his team. But Yeltsin’s to blame for everything, you slave away saying. And [you say my] position is wrong…

Vladimir Soloviev: Funny. It’s immediately clear that you weren’t working in the 1990s. And when you were working “in the gray,” you were fine with everything. You could have come clean.

Vladimir Soloviev: Well that’s why it’s funny to read [you write] about the “system created by Putin.”

Petr Zamkovoi: Vladimir, the idea that everyone is a freeloader and just needs to get off their butts is wrong at its core!!! I think you understand this, but your job requires you [to say otherwise].

Vladimir Soloviev: I’m moved by all these assumptions about me. You think you don’t need to work your butt off? Your position is that they’re all to blame for everything, and I’m just a silly dummy.

Petr Zamkovoi: I don’t like the Putin regime. Do I have the right to see a new government by legal means?! And I’ve worked my ass off since I was 16. I grew up in a village, and I never stop.

Vladimir Soloviev: You’ve got the legal means. But this won’t help you. The alternatives [to Putin] in the opposition are hopelessly bad. It’s just a bunch of crooks and clowns.