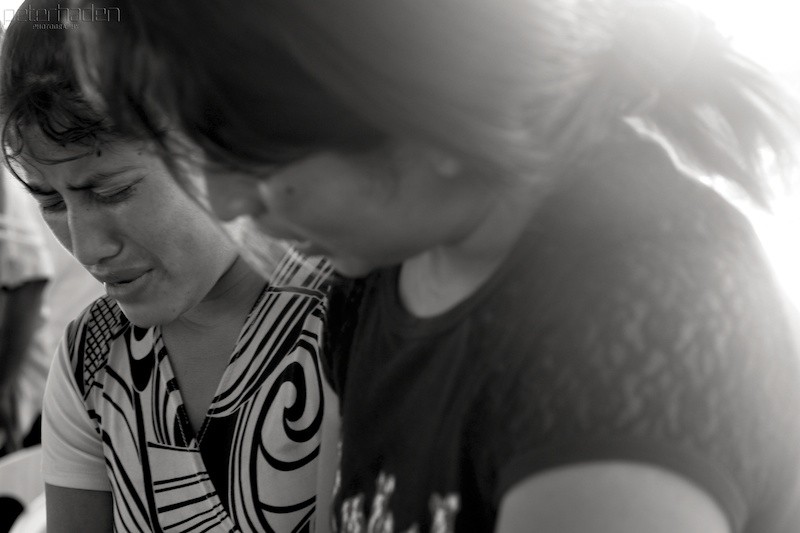 To reach the United States, many Central American women migrants cross Mexico, where feminicide and the disappearance of women have reached alarmingly high levels. Numerous actors and institutions are responsible for the violence against women and migrants: government officials, smugglers, and drug traffickers, as well as historical, political and socioeconomic factors such as inequality, corruption, anti-immigrant policies, poverty, and increased border militarization.

According to some investigations, 80% of Central American women and girls who attempt to cross Mexico are raped.

There is a crisis of missing women in Mexico. Violence against Mexican women has overwhelmed cities like Juarez and Mexico City for years, where disappeared women are found murdered or never heard from again. Just in the Mexican capital alone, 187 reports of missing women were filed in a three-month span earlier this year. Many women are thought to be victims of feminicide—the term for gender violence that describes the murder of women because they are women.

On a national scale, feminicide has increased 55 percent in Mexico between 1990 and 2011. According to a report produced by UN-Women in 2012, feminicide cases in the country have increased steadily since 2007. More recently, the National Citizen Femicide Observatory (OCNF), a coalition that documents the crime, identified that only 24 percent of cases were investigated by authorities and of those 1.6 percent led to sentencing in 2012 and 2013.

Meanwhile, violence against migrant women who cross Mexico’s southern border northbound to the United States remains less visibilized, at a terrible cost. Amnesty International’s ‘Invisible Victims: Migrants on the Move in Mexico” (2010) reported that sexual violence is often perpetrated as a form of payment to be crossed over the two national borders northward:

Many criminal gangs appear to use sexual violence as part of the “price” demanded of migrants. According to some experts, the prevalence of rape is such that people smugglers may require women to have a contraceptive injection prior to the journey as a precaution.

Stories of sexual assault have spread among women in their home countries and communities, and some take measures to prepare for the journey northward. Many take the birth control method Depo-Provera, also known as the “anti-Mexico” injection, to prevent pregnancy. Women migrants also travel in groups with other women to feel safe and protected.

And all along the migrant route, Central American migrant women receive help from migrant shelter volunteers and fellow women.

In the following video for the International Center for the Human Rights of Migrants (Spanish acronym is CIDEHUM), as part of their campaign “Women Migrants Transforming the World,” Lourdes Martínez Gómez, a young woman living in Mexico State, distributes bags of food and undergarments along to the women traveling atop the freight trains that cut through the Huehuetoca municipality.

In the video, Lourdes says:

Women are easy targets. They're perhaps more defenseless than men, and even more so if they are migrant women.

While women migrants have found ways to protect themselves and receive support from activists, access to justice is still particularly difficult for victims of sexual assault. Mexico has adopted a strict policy of detention and deportation for migrants, and approaching authorities to report the crimes is a great risk.

The militarization of Mexico's southern border is a result of U.S. demand for supposed regional security, trade agreements like the North American Free Trade Agreement (NAFTA), and the more recent Alliance for Prosperity. The crackdown on Central American migration has mobilized resources, training for security forces and equipment under the Southern Border Plan. Women migrants have been forced to endure terrible violence as a result of this militarization, crossing extremely dangerous areas to evade detention. Mexico's northern border has also gone through a process of increased militarization.

Historically, Central Americans have fled violence in their home countries, and more recently, women have faced an increase in gender violence at home. According to a NACLA piece, Central America’s northern triangle (which includes El Salvador, Guatemala, and Honduras) rank in the top ten countries in the global index of feminicides. The recent assassination of Honduran environmental activist and Goldman Environmental Prize winner Berta Cáceres exemplified the frightening reality of violence of women and women activists in Central America.

Civil society organizations are pushing for policy change to protect women migrants. Experts have called for the issuance of tourist and humanitarian visas to women migrants in Mexico to mitigate the violence inflicted by a highly militarized border policy and local drug cartels.

We are concerned about rising number of women on the run in Central America https://t.co/u4JZ0rze9G pic.twitter.com/gaz1mYCcoK

In a press briefing earlier this year the UN Refugee Agency called for a stepped-up protection response and a regional approach to sharing responsibility for the migrant crisis.

“UNHCR considers the current situation in Central America to be a protection crisis. We are particularly concerned about the rising numbers of unaccompanied children and women on the run who face forced recruitment into criminal gangs, sexual- and gender-based violence and murder,” said UNHCR spokesperson Adrian Edwards.