Who Was Jalaluddin Rumi, and Whose Rumi Is He? 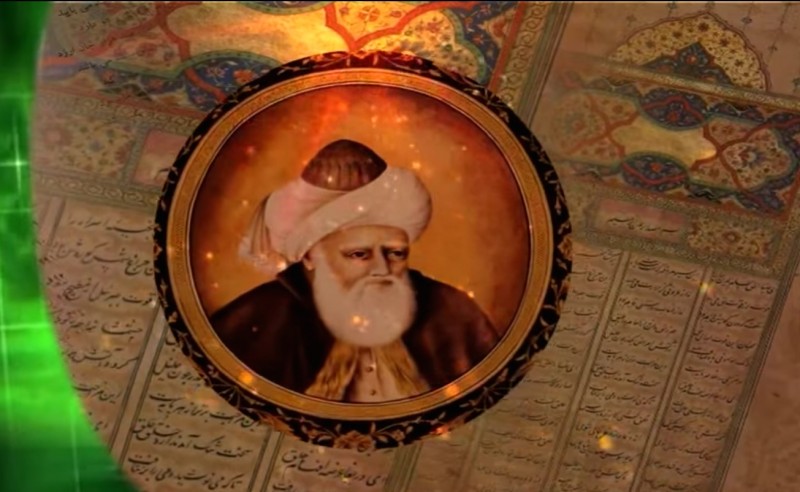 Rumi as depicted in a short film uploaded onto YouTube by user Ghaus Siwani.

As all the countries that call the work of Jalaluddin Rumi their own rise up against the idea of Leonardo Di Caprio playing the poet and scholar in a Hollywood epic, social media users in Afghanistan are pushing back against Iran and Turkey's reported joint claim to the poet's 800-year-old masterpiece Mathnawi Ma’nawi .

The report proved a viral controversy on Afghan social media and prompted a frenzy of diplomatic back-and-forth.

Çavuşoğlu in turn expressed his “unawareness of the issue” and promised “Afghanistan’s considerations and recommendations as the birthplace of Maulana Jalaladdin Muhammad Balkhi” would be considered in the submission, a reaction that failed to quell online protest.

Then, on June 12, a journalist for Afghan media outlet Ariana News posted an interview with Iran’s ambassador to Afghanistan who said Iran “has no claim to own Maulana; Iran has no intention to register Mathnawi or Maulana. Iran only attempts to register some old versions of the Mathnawi.”

‘I come from Balkh’

Mathnawi Ma’nawi (literally: The Spiritual Couplets) is one of three known works written by Rumi, consisting of six chapters and some 26,000 couplets in total.

Mathnawi Ma’nawi is revered across the Persian-speaking world, including in Afghanistan, Iran and Tajikistan, as a book of exceptional wisdom.

For many Persian language-speakers it is even heralded as a “second Quran” or “the Persian Quran” — the ultimate tribute to its mystical and spiritually rich content.

On June 9, a group of civil society activists gathered in Kabul to protest Iran and Turkey's UNESCO submission, insisting Rumi was a “cosmopolitan poet who is a precious asset of all people of culture.”

They argued: “Everyone knows that he was born in [Afghanistan's] Balkh and then moved to Konya.”

Many other Facebook users also cited the same couplet of Mathnawi as proof he belongs to Balkh, Afghanistan.

But in several of his ghazals, Rumi is more nebulous about his origins:

“Not Christian, nor Jew nor Muslim, not Hindu/ Buddhist, Sufi, or Zen. Not any religion/ or cultural system. I am not from the East/ or the West, not out of the ocean or above,” he writes in one.

Maulana’s homeland is the realm of Jaan (“spirit”)

The page put forward a petition against the Ankara-Teheran UNESCO submission that has since been signed by over 5,000 people, close to its 7,500 target.

Rumi most likely was born in Balkh — either the Afghan city or the broader region that also ventures into modern-day Tajikistan — on September 30, 1207.

But in the wake of the Mongol invasion of Central Asia from 1215 to 1220, Bahauddin Walad, Rumi's Father, set out westwards together with his family.

Rumi’s family proceeded to Baghdad, performing the Hajj pilgrimage in Mecca, then to Damascus, then to Karaman where they settled for seven years before leaving for Konya, Anatolia in 1228.

At the time the city was under the Seljuk Sultanate of Rûm, which provides the basis for Maulana's last name.

A student of theology, Arabic literature and religious studies, Maulana became a teacher at 25, and later a renowned jurist, who gave sermons in Konya's mosques.

He also attracted thousands of students, for which he was widely envied.

Rocked by the loss, Maulauna burst into verse.

Among the tens of thousands of verses attributed to Rumi, some 44,000 verses are collected in two epic books named Divan-e Shams-e Tabrizi (his ghazals, love and mystic poems) written in honour of his friend, and some 25,000 are collected in Mathnawi Ma’nawi (lines of wisdom).

With the news of the joint UNESCO submission still fresh, on June 6, David Franzoni, an Oscar winner screenwriter, told the Guardian newspaper that he had “agreed to work on a biopic about the 13th-century poet Jalaluddin Rumi.”

He also said that he wants Hollywood star Leonardo DiCaprio to play the role of Rumi, sparking excitement among some Afghans and revulsion among others.

Racists get so mad when a FICTIONAL character eg hermione is made black but they're fine whitewashing REAL PEOPLE??? Ok #RumiWasntWhite

I hope the #Rumi film will be an authentic representation of customs of the region unlike the traumatic ‘Rock The Kasbah’. #RumiWasntWhite

So they want a white man to play Rumi, a SUFI PERSIAN poet, but when they need a terrorist they find Muslim actors so easily #RumiWasntWhite

Only time will tell whether Rumi's legend will  be honoured or mistreated by the silver screen, but many Afghans admit  — whether freely or reluctantly — that it was created thousands of miles west of the land of his birth.

Yet the theologian of broad learning still has much to teach Afghanistan, where extremist interpretations of religion continue cast a shadow over the joy of spirit that suffused his life's work.

Rumi's true admirers will hope the noise surrounding his origins does not drown out the power and wisdom of his words, at a time when the world is most in need of them.