The Wild World of Telegram Stickers 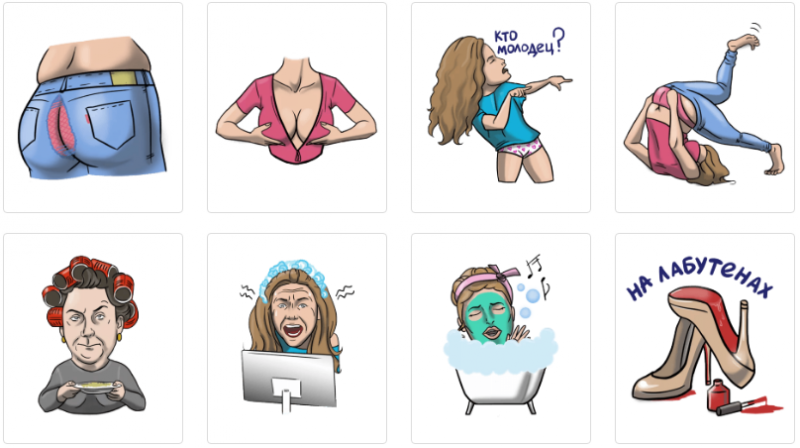 Here at RuNet Echo, we regularly try to cover news stories that capture important aspects of life in Russia, as it occurs on the Internet. Our articles focus on gay rights, the freedom of speech, online regulations, and a host of other issues we consider vital to the state of Russia’s modern-day civil society.

This isn’t one of those articles. It’s Friday and today we’re going to write about stickers—not just any stickers, mind you, but the stickers that have been flooding the instant messenger app Telegram for the past year.

On May 19, 2015, Telegram’s developers opened up their stickers feature (which enables custom-designed emoji sets) to any artists interested in creating their own. Each sticker set gets its own permanent link for public sharing. There is no central repository for all Telegram stickers, but there are several websites and social media forums where people collect and share their favorites.

There are lots of Telegram stickers today. Some of them are very familiar, mimicking or outright copying the sticker sets that come bundled with more popular apps like Facebook Messenger. But many artists have clearly answered Telegram’s call, creating sticker sets based on distinctly Russian, often amazingly arcane subjects. Some of the stickers have political resonance (somewhat betraying this text’s earlier claim that this story is a pure distraction from Russian civil society), and others celebrate or satirize Western popular culture.

RuNet Echo shares a few of our favorite Telegram stickers.

No RuNet phenomenon would be complete without a whole mess of Vladimir Putin photos. This set includes a gallery of images showing Russia's commander in chief in some of his most famous poses, including his patriotic re-election speech at Luzhniki stadium in February 2012, his shirtless fishing trip in August 2007, his embrace with a Bulgarian shepherd Karakachan puppy in November 2010, and much more. 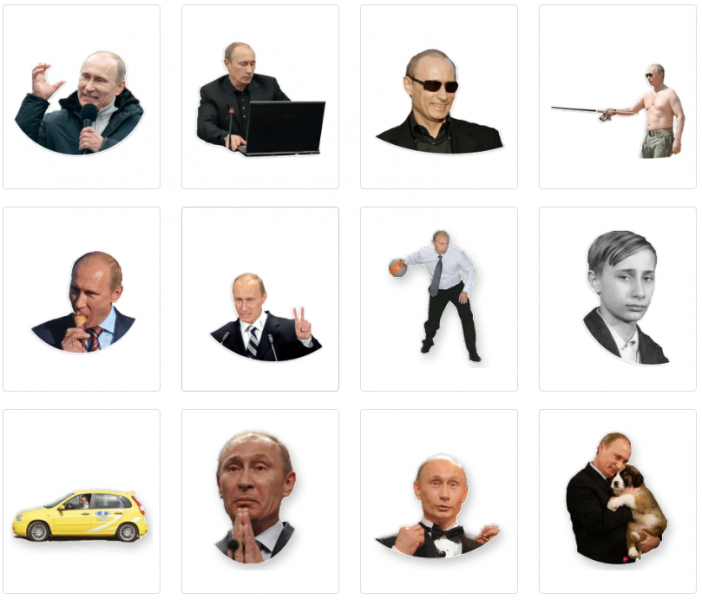 The same sticker pack also includes several anti-American cartoons featuring US President Barack Obama, showing him eyeing a nuclear missile, laughing in a straightjacket, and lighting a cigar, looking like a demon. (There's also a racist sticker, which we've blurred to spare you that image.) 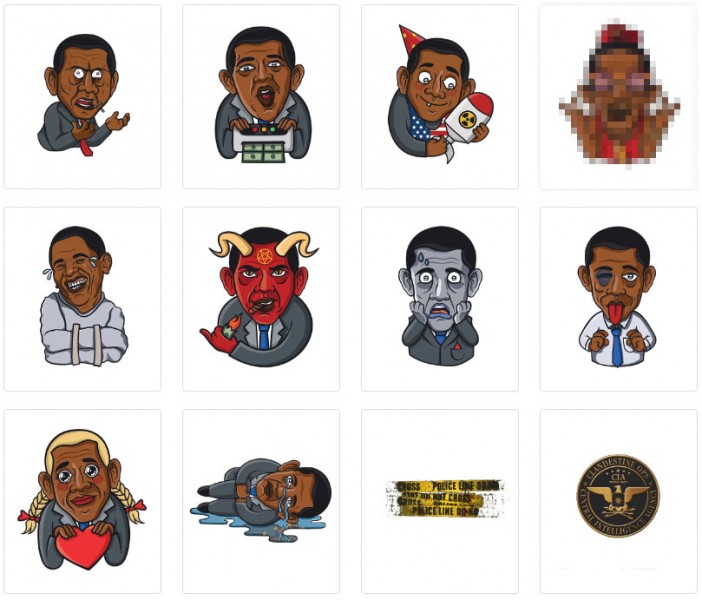 The next set of stickers appears to have been made by someone who likes to read the news, as it consists of cartoons depicting various Russian public figures. From left to right, we have anti-corruption activist Alexey Navalny (saying, “Hahaha, stop!”), conservative lawmaker Vitaly Milonov (saying, “Sinful! Harmful! Prohibited!”), Russian Orthodox Patriarch Kirill (saying, “'Sup, bandits!”), the head of Russia's Central Bank, Elvira Nabiullina (blowing her nose and crying), Chechen dictator Ramzan Kadyrov (repeating his menacing catchphrase, “He who doesn't understand, will understand!”), the fictional character Borat Sagdiyev (reaching through a TV set displaying the network “RT” and saying to its chief editor, “Margarita Simonyan, you're drunk!”), Kremlin spokesman Dmitry Peskov (dressed in his posh recreation clothes, saying, “You're kidding! Seriously?”), Vladimir Putin (saying, “Not funny!”), Rosneft oil CEO Igor Sechin (adapting a rhyming meme about Patriarch Kirill, roughly saying, “The barrel turns, and the money returns”), a sleeping Prime Minister Dmitry Medvedev (who's notoriously been caught dozing at public events), Barack Obama, “Echo of Moscow” chief editor Alexey Venediktov, Russian Foreign Minister Sergei Lavrov (swearing at a news conference, like he did accidentally in August 2015), the artist Petr Pavlensky (sewing his mouth shut, as he did in July 2012, in support of the jailed musicians Pussy Riot), Belarusian President Alexander Lukashenko, and former oligarch, turned political dissident, Mikhail Khodorkovsky (leaving with a suitcase, alluding to his new post-prison life in foreign exile, saying, “Do svidaniya!”). 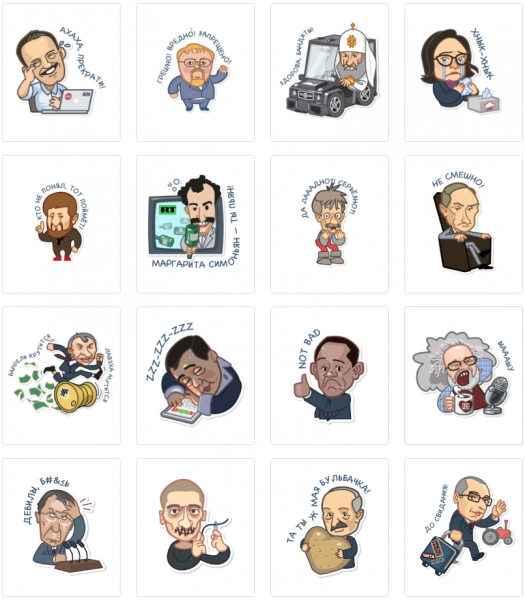 Most of the stickers aren't so overtly political, of course. For instance, there's this set of cartoons depicting Karina Sycheva, known online as “Streamer Karina,” who was banned from the Twitch streaming video service in May 2016 for airing excessive “non-gaming content” on her channel. In February 2016, Karina was voted one the “top-five sexiest Russian streamers” by the pro-Kremlin website “RuPosters.” She has inspired hundreds of memes, including an autotuned song on YouTube with 15.7 million views. 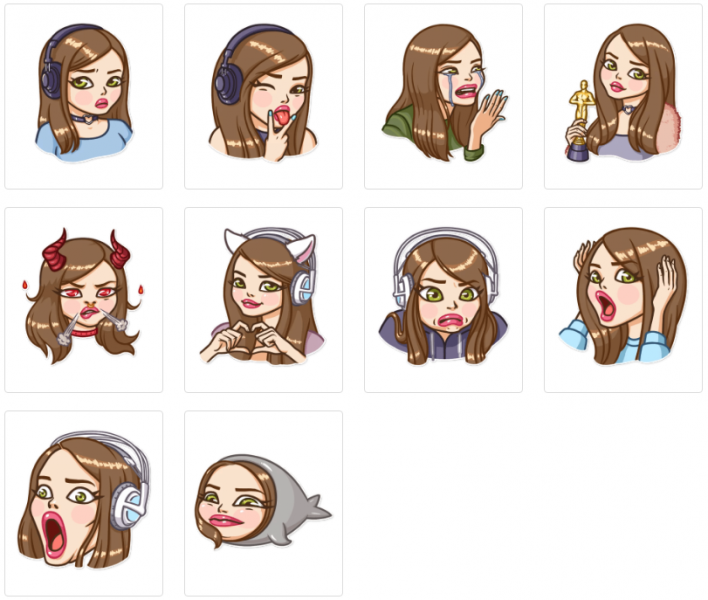 There are also Telegram stickers that depict scenes from the two latest music videos by the popular group Leningrad. The first video, “Display Exhibit” (“Exponat”), was released in February this year. The song tells the story of a young woman going on a date with a man named Serge to an art exhibit featuring work by Vincent van Gogh. Throughout the video, she tries and ultimately fails to make herself presentable to her date. 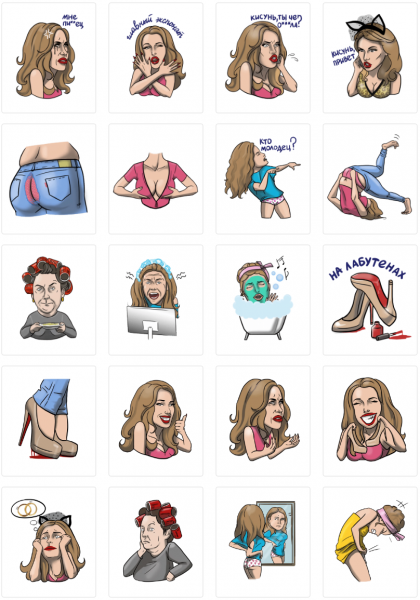 Leningrad's more recent viral hit, “In Peter, You Drink,” tells the story of several people in St. Petersburg suffering bad days at work, ultimately coming together for a fun night of heavy drinking. 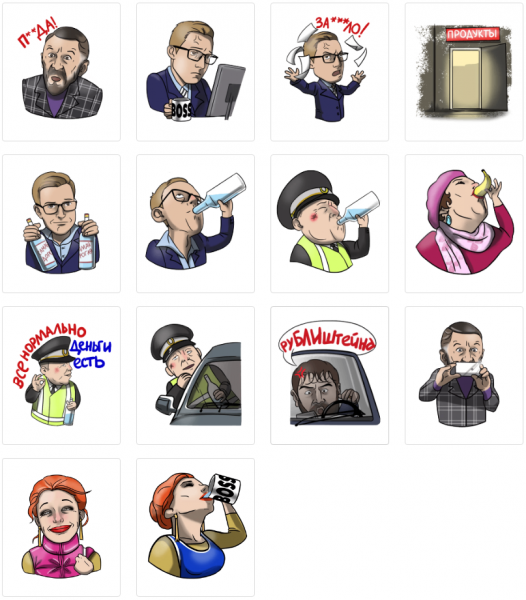 If you feel like there isn't enough Hitler or Stalin in your Internet experience, you can also download this sticker set of historical “evil minds.” 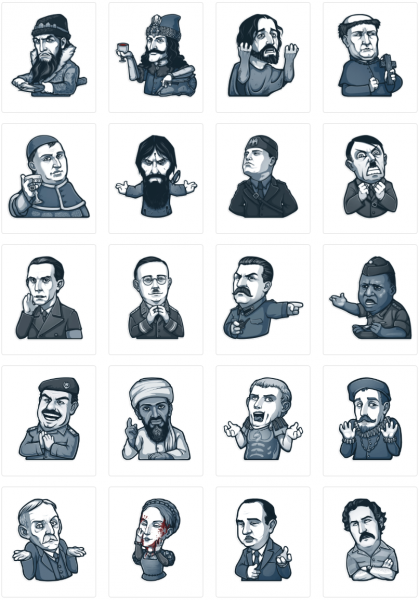 There are lots more Telegram stickers. We found the stickers shown above at this website, but there are also repositories on Reddit, Vkontakte, and many other places we likely haven't even thought to look. Have you got a favorite Telegram sticker set? Let us know in the comments.