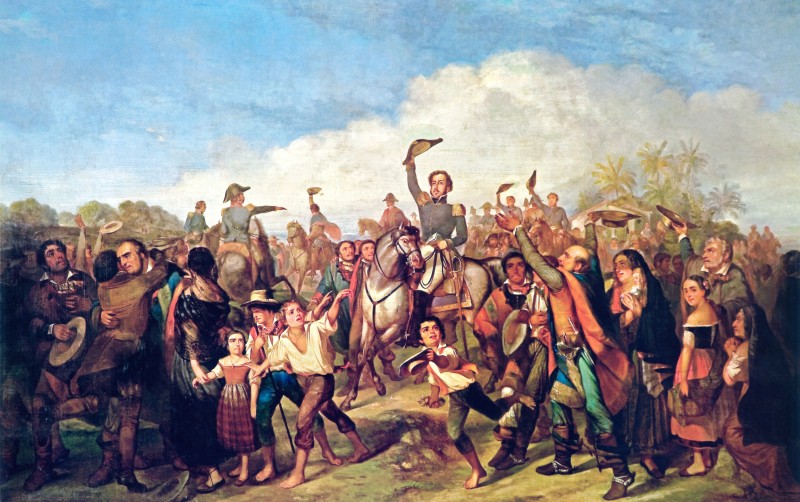 A rendition of Brazil's independence by French painter François-René Moreau, from the mid 1800s. At the center is Dom Pedro I, Brazil's first monarch, the son of the then Portuguese king John VI. Public Domain.

It's been 127 years since Brazil was a monarchy, but President Dilma Rousseff's possible impeachment has presented the heirs of the country's last royal family with an opportunity to appeal to supporters for a return of the empire, and social media could play a big role in this effort.

Last week, Prince Don Rafael (who would be the fourth in the succession line, were Brazil still a monarchy) shared a video [1] on his official Facebook page that soon gained viral popularity. In the video, Rafael salutes the country's “monarchists” and asserts that “the return of the monarchy is only a matter of time.” With more than 400,000 views, the video helped to triple Rafael's Facebook followers [2] from 6,000 to almost 20,000 in a matter of days.

Brazil was a Portuguese colony [3]between 1500 and 1815, when it was elevated to a kingdom following the transfer of the Portuguese Court to its largest colony during the Napoleonic invasions of Portugal. In 1822, after the royal family returned to Portugal, Brazil finally became independent, but oddly enough its biggest national hero was Dom Pedro, the son of the Portuguese king himself, who was left behind to govern the country as prince regent.

Dom Pedro enjoyed the support of the country's rural, slave-owning aristocracy, who felt threatened by both Portugal's grip and the republican-revolutionary movements sweeping across Spanish America. The aristocracy endorsed a constitutional monarchy as the best way to preserve its own interests, while at the same time riding the wave of nationalism triggered by the French Revolution. It was only in 1889, after the nation witnessed a growing urban entrepreneurial class and strains between the military and the royal aristocracy, that Brazil finally became a republic and deposed the then ruler Dom Pedro II.

In comments on Don Rafael's video, many Facebook users have taken to mocking the would-be prince, inventing several jokes based on the television show “Game of Thrones,” like suggestions that dragons or a Dothraki army should help him retake the Brazilian throne. But many other Internet users seem to be genuinely in favor of a restored monarchy. These Brazilians seem to believe that the monarchic regimes in Sweden, Denmark, and the United Kingdom are the reason these countries enjoy such prosperity and social equality. Even more surprising is the fact that the large majority of new monarchy supporters seem to be young people.

In May, the journalist and talk-show host Mariana Godoy ran a poll on her Twitter account asking readers to vote on the best form of government for Brazil. Though the survey was thoroughly unscientific, a surprising 41 percent of respondents chose monarchy.

Mariana Godoy was about to host Dom Bertrand de Orleans e Bragança on her show, who, along with his brother Dom Luís — both descendants of Dom Pedro II, the second and the first in line for a hypothetical throne — seem to be learning how to capitalize on the country's conservative momentum to sell their cause. On the talk show [4], D. Bertrand defended the military coup of 1964, that put Brazil in 21 years of dictatorship, the right for private property above all and, under the obedience of “the laws of God,” condemned homossexuality and any “privileges” to LGBT people. 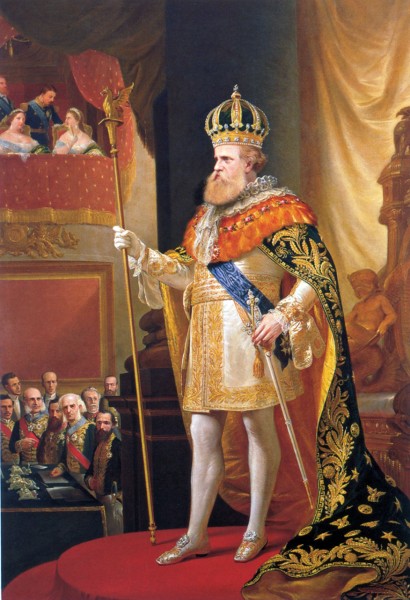 The Empire (Tries to) Strike Back

While the idea of restoring a monarchy in Brazil sounds bizarre to many people, the country's old imperial flag is becoming an increasingly common sight in street protests [5] against the Worker's Party that began in late 2014. Dom Bertrand (who, according to the disputed claims of the Vassouras branch of the family, is first in the line of succession to the defunct Brazilian throne) has claimed proudly that supporters have been assembling spontaneously. “People are tired with the republic,” he insists [4].

Over the past year, various princes in Brazil's royal family have frequently appeared among the “common people” in the protests against Dilma Rousseff, posing for pictures with the old imperial flag. This approach is different from a past behavior. During the June 2013 mass protests [6] that brought millions of Brazilians into the streets to protest rising bus fares and corruption, the official recommendation from the “Imperial House” to its supporters was to stay at home. According to BBC Brasil [7], monarchists found it necessary to “abstain” from participation in mass rallies, at the time.

Before Brazil's presidential elections in 2014, a note penned by D. Luís, published on the website monarchy.com [8], discussed “natural rights,” quoting Cicero, Aristotle, and the Bible, urging monarchists not to vote for “candidates who contradict such teachings [on natural rights]” or for “parties whose platforms insult the Law of God.”

In an interview with the newspaper Folha de São Paulo [9], Bertrand explained why his family has decided to embrace political protests now:

Brazil is missing a regime that makes the nation what a nation must be: a great family with a common destiny to fulfill.

When Brazilians shout ‘I want my Brazil back’, they shout ‘I want the Brazil of the Christ Redeemer and Our Virgin Mary from Aparecida [a local image]’.

When D. Pedro II, the great-great-grandfather of the two princes who now advocate restoring Brazil's monarchy, was ousted by republicans in 1889. He did not put up a fight. Instead, the royal family packed its bags and went to live in Europe.

In 1993, riding the backlash of another presidential impeachment process, a plebiscite [10]asked Brazilians about their preferred system of government. With time on TV [11] to defend their idea, the monarchists received only 10.2 percent of the public's support. Today, this scenario doesn’t seem to have changed. A crowdfunding campaign [12] to fund the “monarchy’s publicity on the Internet” managed only 33 percent of its goal of BRL 5,000 ($1,470).

Brazil's monarchists might only be getting started, however. Last May, the country's Senate received a proposal [13] to restore a parliamentary monarchy as a solution to end Brazil's “corrupt and corruptive presidentialism.” The Senate published the proposal on its website, where people have until September 2017 to endorse the text. So far, it has a whopping 18 supporters.