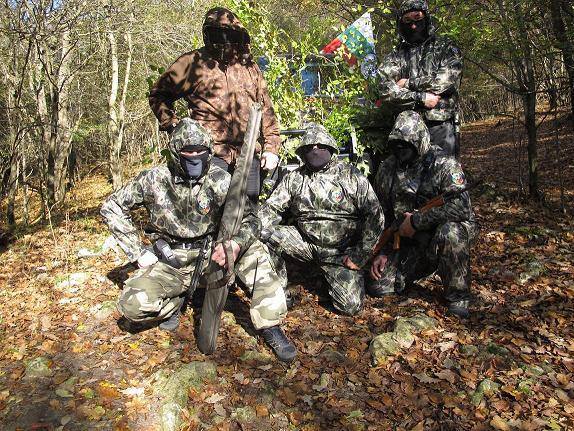 Members of Bulgarian nationalist faction BNO Shipka on the border with Turkey, “waiting for refugees”. Photo from Facebook page of BNO Shipka https://www.facebook.com/voenensauz/

At least 800 people are involved in organized militias that hunt refugees along the borders of Bulgaria. According to their leader, they receive free training from Russia.

An investigation by German public television channel ZDF aired on June 8 found that at least half of these men have done stints in the Bulgarian military. They wear masks and military camouflage, and most carry knives. Some, however, have guns as well.

The idea of civil patrols in Bulgaria is nothing new. But the practice has re-emerged as the number of refugees from Syria entering the country increased in 2013 and 2014.

By the end of 2013, an estimated 15,000 Syrian refugees had entered Bulgaria illegally, seeking safety. However, the small EU country, awash with its own political and economic instability, has not been able to cope with the influx of asylum-seekers. In an effort to stem the arrival of new refugees, the Bulgarian government authorized the construction of a 30-kilometre barbed wire fence running along the border with Turkey. Tension between refugees suffering from poverty and unemployment and local communities have spiked.

These civil patrols are a consequence of the inadequate response to the problem by authorities and then government of Plamen Oresharski. First they cropped up in Sofia, the capital, and since 2015 there have been a number of patrols on the Bulgarian-Turkish border that had developed into de-facto paramilitary organizations.

At first, these “patrols” did not carry weapons openly. They become more popular and more militarized with the establishment of several refugee centers in and around Sofia. These include the main center in Ovcha Kupel, Voenna Rampa and Vrazhdebna, which are administered by the Bulgarian State Agency for Refugees. An unknown number of migrants also occupy apartments in central areas of the capital.

Migrants have received mainly residency documents and shelter for them and their families, but Nationalist circles in Bulgaria began leveraging the increasing numbers of refugees for local political purposes and to increase their visibility among Bulgarian citizens. Boyan Rasate, for example, the leader of Bulgarian National Union – New Democracy (BNU-ND), a National Socialist political party based in Sofia, leads one of these civil patrols, claiming that he's doing so in order to be “patriotic and to protect Bulgarian values”.

During the last three years, the Syrians and other refugees have continued to suffer an increasing number of attacks in Bulgaria's capital. On December 2, 2013 two Syrian refugees have been assaulted by a group of 20 men armed with knives and chains. The two victims, aged 27 and 35, suffered a broken nose and knife injures to the head.

On November 9, 2013, a 28-year-old Bulgarian man of Turkish descent was beaten after being mistaken for an immigrant. Other xenophobic attacks include the stabbing of an 18-year-old Malian boy and a 17-year-old Syrian national between November and December 2013.

At the end of 2013, human rights group Amnesty International expressed alarm at the increase in xenophobic hate crimes against immigrants in Bulgaria and the anti-immigrant protests being organized by far-right groups. Quoted in an Amnesty statement on 12 November 2013, spokeswoman Barbora Cernusakova said that “There is an alarming and dangerous rise in xenophobic feeling in Bulgaria and the onus is on the authorities to prevent it, but instead many recent government statements risk inflaming the situation.”

According to Bulgarian police data, 1,500 people are stopped every month from crossing the borders from Turkey and Greece. Between end of May and the beginning in June 2016 several reports have appeared about groups of people who managed to pass from Greece to Bulgaria. The news agency Novinite reported that 53 migrants were quickly sent back to Greece by the Bulgarian authorities. Another group of 34 were caught in a freight train on the route from Greece to Bulgaria. Another Novinite report claims that one day, in the space of 24 hours, another 215 migrants were prevented from entering Bulgaria: 62 tried to cross the border between Greece and Bulgaria at Novo Selo, 155 tried to enter from the border with Turkey. As a result of these incidents, the Bulgarian authorities deployed army units on the border with Greece.

As news about refugees became more frequent “civil patrols” began to appear on the border with Turkey. Legally, they do not have the right to make arrests, but they perform them anyway. The patrols have been reported, for instance, to have “captured”several Afghan nationals, and in February 2016 Dinko Valev, a 29-year old from the small town of Yambol, was praised in Bulgarian media as a “superhero” for catching a group of Syrian refugees “with his bare hands.” Valev boasted on national television of patrolling the Turkish border to “hunt” migrants, and has since started a group of his own.

While the activities of the “patrols” have sparked controversy in Bulgaria, the authorities and government led by centre-right political party GERB and the Prime Minister Boyko Borissov have remained silent. In general, the Bulgarian media remain silent too. News reports mention the “civil patrols” in Sofia, but not those along the border with Turkey. One of the few reactions to the ZDF report has been from the news website Mediapool, which summarized the report's content and discussed with the development of these squads under the headline “Russian-trained refugees hunters in Bulgaria”. Another reaction came from the news website Actualno.com, which also focused on the training provided by Russia. Pro-Russian media like Budna era referred not to refugees but to “invaders”.

As ZDF reported, the civil patrols are increasing in size and continue to arm themselves with heavier weaponry. Some of their members and leaders are also reported to be former Russian soldiers.

The leading nationalist faction that has deployed patrols on the border with Turkey is Voenen sayuz – BNO Shipka (“Military union – BNO Shipka”). They maintain a Facebook page and a Facebook group, both or which currently have more than 4,000 members. In these fora they discuss actions against refugees and migrants. On June 6, Russian channel produced a video about activities.

In the ZDF video, a the patrol member says, “If the agreement with Turkey fails, we are ready for war with the refugees.”

What this means, exactly, is unclear, and it is also unclear whether the authorities will respond appropriately, as so far the Bulgarian government has failed to publicly address the issue of the civil patrols.