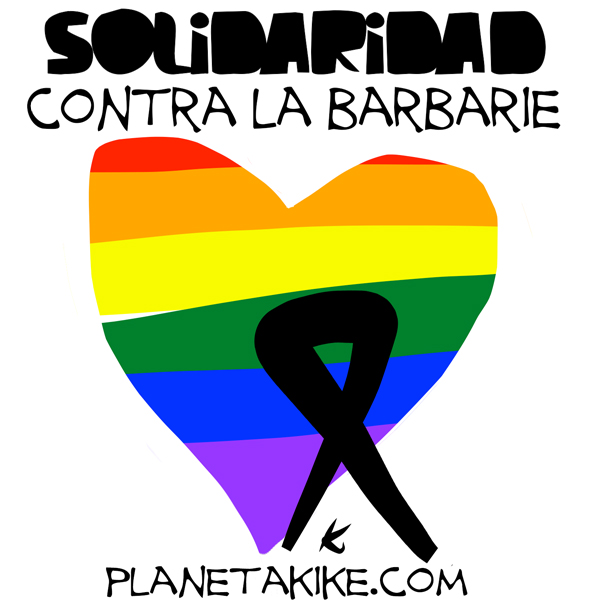 “Solidarity against inhumanity.” Illustration by artist Kike Estrada in honor of the victims of the Orlando massacre. Taken from his website, planetakike.com. Used with permission.

From the first hours after the news of the Orlando massacre broke, in which a shooter named Omar Mateen killed 49 people and injured 53 others in an act of hatred of LGBTQ people, it was clear that most of the men and women who died that day were Latin Americans. But it wouldn't be for several more hours, after the majority of the victim's names were confirmed, that it would become clear that most of the Latinas and Latinos were Puerto Rican — 23 of the 49 killed.

For Puerto Ricans, the tragedy is perhaps even greater. Orlando is home to one of the largest Puerto Rican communities in the United States, having been for decades a popular destination for those who emigrated looking for better employment opportunities and a better quality of life for their families. One of the reasons many Puerto Ricans give for emigrating to the US is precisely to find a safer neighborhood to live in, due to the increase of violent crimes in Puerto Rico over the past years. Doubtless, many of the people who were killed emigrated there looking for a better life and probably felt they were safer.

Writing for non-profit news site 80 grados, Puerto Rican queer activist Yoryie Irizarry explained why the pain of these deaths is felt so strongly among the LGBTQ community:

For many of us, the club is a safer place than our family home. It was in a club that I discovered, surprised and excited, that men can dance with other men, and women with other women. It was in a club where many of us learned to dance with each other, seduce each other and touch each other without fear of being judged by anyone. It is in a club where we “let our hair down,” freed of the ideological and patriarchal corset that dictates each and every allowed movement and expression according to the genitals. For many of us the discotheque represents a safe space that protects us during traditional holidays. We gather there after the boring Thanksgiving family dinner or the family feasts on Christmas Eve or Christmas Day. In the club we are free to be who we are. That is why this homophobic attack on our brothers and sisters in Orlando feels so personal. We know the ties of friendship, sensuality and love that unite us in the bar, the fraternal experiences, the jokes, the music that we share when we dance and laugh, free to be who we are, far from the judging glare of those who hate us.

Early on when the ethnic and cultural backgrounds of the victims were still largely unconfirmed, Facebook user Nelie Lebrón Robles made the following poignant observation about an angle that has remained unexplored in mainstream media as of this writing:

At the end of the day, not only the gay community, but the Latino and especially Puerto Rican communities, will have been protagonists among the victims of this tragedy in Orlando. And then I ask myself, shouldn't the predominant nationality of the victims be a factor to take into consideration? This occurred on Latino Night in the nightclub Pulse. Without having divulged officially the names of all the deceased, we know of three Puerto Rican victims… How many more are boricuas [Puerto Rican]? All speak of the obvious: anti-gay hate crime, radical Islamic terrorism… But we haven't heard the possibility that the victims could also have been chosen for their Latino origins.

Mateen's motives haven't been confirmed, and what is known paints a complicated picture. So far, there is no evidence that Mateen was under the direction of any extremist group, though he had been investigated by the FBI for having previously claimed ties to groups like ISIS, the al Nusra Front (an affiliate of al Qaeda) and Hezbollah. But, as has been pointed out, this is confusing because these groups are in conflict with each other. Authorities believe that the likely explanation is that Mateen was self-radicalized.

People who knew him have told the press he had anger issues and was homophobic, racist and misogynistic. Mateen, however, was seen many times previously at Pulse nightclub, the site of the shooting, which is a popular gay club. He also had reportedly used a gay dating app, suggesting that perhaps his own internal conflicts about his sexuality were part of what drove him to commit such horrific violence.

Regardless of motives, the fact is mass shootings have become disturbingly frequent in the United States, and a common thread among them has been the attackers’ easy access to firearms. The US must take a hard, honest look at itself on where it stands on this issue if future tragedies like this one are to be prevented.