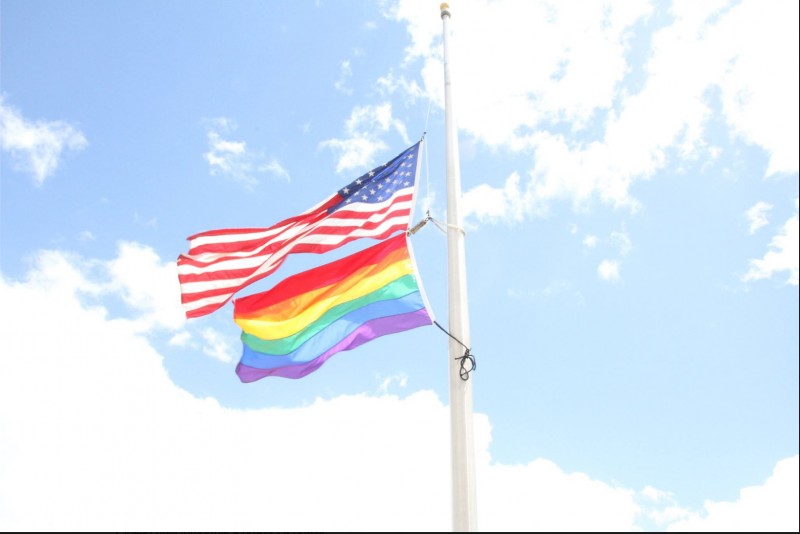 A screenshot of the image posted by the United States Embassy in Jamaica on its Facebook page, showing the US flag and the rainbow flag — a global symbol of the LGBT movement — being flown at half mast out of respect for the Orlando nightclub shooting victims.

Like the rest of the world, many Jamaicans reacted on social media with shock, sadness and condemnation to the deadly shooting at Pulse nightclub in Orlando, Florida on June 12. Prime Minister Andrew Holness issued a statement later that day expressing sympathies to the American people and noting that Jamaica itself is struggling to cope with a high level of gun violence.

The U.S. Embassy in Jamaica flew a rainbow flag just below the national flag at half-mast on the Monday that followed the violence, tweeting and sharing a photo on its Facebook page. Jamaican LGBT rights group J-FLAG posted the photo on their website and Facebook page with one word: “Amazing.” 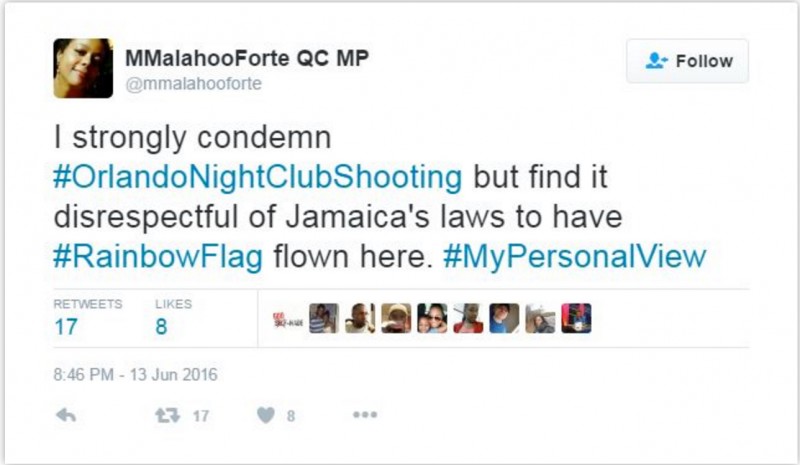 “I strongly condemn the #OrlandoNightClubShooting but find it disrespectful of Jamaica's laws to have #RainbowFlag flown here. #MyPersonalView” Screenshot of the Jamaican Attorney General's tweet that has since been removed from Twitter.

@mmalahooforte we're listening. Explain the legal reasoning? It was an attack of terror !!and!! hate, targeting the LGBT community.

The Attorney General did not reply.

Responses to the attorney general’s tweet were mixed, but many Jamaicans were angered by her perceived insensitivity, and surprised that she had expressed her personal views on Twitter. Donahue Martin tweeted:

If I put up a rainbow flag I guess the AG would send agents of the state to my home. The symbol of God's promise is offensive, apparently

OF RAINBOW FLAGS + SOME JAMAICANS’ PRIDE IN THEIR HYPOCRISY
I knew the Rainbow flag being flown at the US Embassy here in Jamaica, in support of the 53 people [the actual number of fatalities is 49] who lost their lives in Orlando, at the hands of a lunatic, was going to cause a stir.
But let's get some things clear. […]
It was a hateful, cowardly attack on the freedom to be, do and have the kind of life we all want […]
It's the US Embassy, they can fly any colour, size flag they damn well please, Embassy grounds are US territory.
[…] The Attorney General's statement about the Rainbow Flag on Twitter is unfortunate ( the most diplomatic word I could find ) and it is not aligned with God, ma'am. The last time I checked, she/he is still a God of Love.
[…] Jamaica's laws are highly discriminatory against hundreds of thousands of our fellow human beings. Let's not even get started on the Justice System, over which the AG now presides. […]
The more we choose love, over hypocrisy and discrimination, the better off, we all will be.
It would be nice to hear this from our Political Leaders… ‘Regardless of race, religion, faith or sexual orientation, we’re all Jamaicans.’
‪#‎IAMNOTwithHer‬
‪#‎IamNotWithTheAG‬
‪#‎SomeOnePassMeARainblowFlag‬
Let us stop majoring in the damn minors man!

Jamaica has had a bumpy road to the acceptance of LGBT rights. The country has an international reputation for being homophobic — from dancehall lyrics with anti-gay sentiments to violence against members of the LGBT community and even media blackouts on ads advocating tolerance and acceptance. Many Jamaicans routinely make a distinction between their largely religious-based opposition to homosexuality and homophobia. This is the same country in which the first-ever local gay pride celebrations came off without a hitch nearly a year ago, so the public discourse about homosexuality is certainly changing.

Walked into my office a short moment ago to see that my head of chambers is wearing a rainbow tie.#RainbowDay

I was searching for a rainbow flag yday. I would have happily flown it in solidarity with the gay community

Her husband Mark Shields noted that – as expected – Jamaicans are deeply divided on the issue, tweeting:

Tired of people pushing exclusion to win votes. Pushing this one and that one, including women, queers and poor people, out of the fold of the country to gather votes. Me nah stomach it no more. ..Be smarter, Marlene, you is a big woman now.

In a letter to the Gleaner newspaper, Michelle Bradshaw commented:

As a public figure and one with such a highly placed statute, for her to even think of tweeting such comments, at such a time is an indication that many of those holding public office have no clue as to where or when to draw the line.

No one is saying that she is not allowed to have her personal views, but as Attorney General those views at the time only helped to once again paint Jamaica and Jamaicans as homophobes hell bent on getting rid of homosexuals and are lacking in empathy even in the face of tragedy.

By midday, the attorney general’s morning tweet had been deleted. Later in the afternoon, she tweeted (now also deleted):

As usual, there are those who find a humorous slant. Anglican cleric and human rights activist Father Sean Major Campbell shared on Facebook:

VERY CONCERNED: Saw a rainbow a few moments ago in the direction of Jack’s Hill. The audacity! The things that nature does!

To the south of the Caribbean archipelago, Trinidadian satirical website The Late O'Clock News observed:

The Attorney General of Jamaica Marlene Malahoo Forte says Jamaican culture is being threatened by a rainbow in the sky. And now, she is calling on God to remove the rainbow, because it disrespects Jamaican laws.

The Late O’Clock News contacted the Jamaican AG and tried to inform her that a rainbow is actually a meteorological phenomenon caused by reflection, refraction and dispersion of light in water droplets; to which she responded, ‘fire bun sodomite science dem’.

Responding immediately after the controversy flared on social media, Prime Minister Andrew Holness had already taken the opportunity to reiterate his stance, with a slightly different angle. At the beginning of a speech at an Ethics and Security forum organized by the Ministries of Education and National Security that same morning, he noted: “The terrorist bullet does not discriminate. It does not know gender, class, race, ethnicity or sexual orientation.”

U.S. Embassy official Joshua Polacheck commented later in the day that the embassy accepted the prime minister's words as speaking for all Jamaicans.

Meanwhile, the Attorney General told the Jamaica Observer that the second part of her tweet had been misconstrued. She reiterated that personally, she celebrates people's differences and in her role as attorney general is “sworn to uphold and defend the constitution and laws of Jamaica”, adding, “In both spheres I remain a sincere advocate for fair and proper treatment of everyone. And I will never condone the use of violence to deal with our differences.”

Did the prime minister’s and the U.S. Embassy's comments smooth things over? Perhaps, but this incident goes to show that 24 hours in social media can be a long time for Jamaican public officials. Meanwhile, the Jamaica Gleaner newspaper tweeted a photo of the beautiful rainbow that, with perfect timing, appeared over Kingston in the afternoon: