Helping Refugees in Europe Get Connected to the Internet 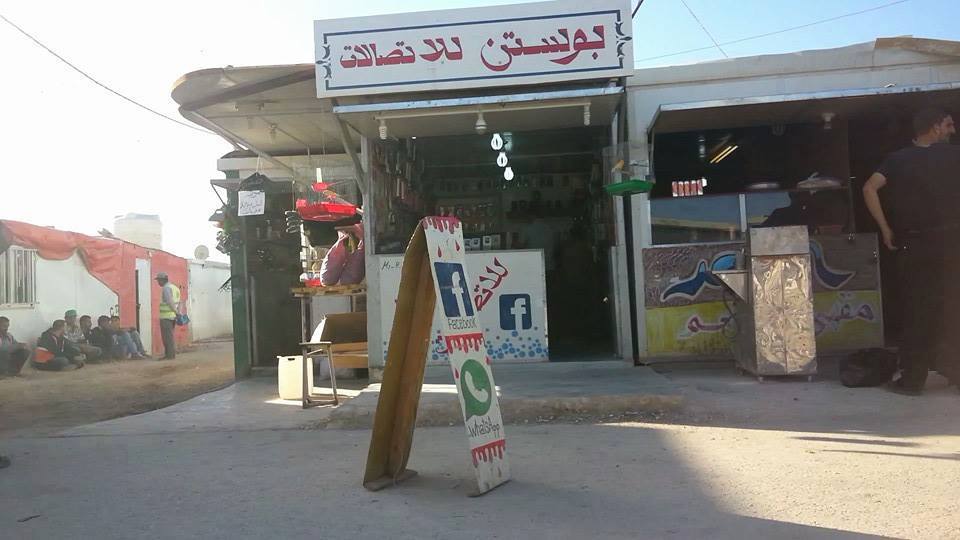 Smartphones have become a lifeline for refugees during their long journey for the relative safety of Europe, as they are used for communication and organization through social media and websites. However, a smartphone has its limitations because its battery can only last anywhere between 12-48 hours and it is subject to the national network coverage or available wifi hotspots.

Tyler Jump from the International Rescue Committee wrote in a recent Medium piece about a refugee's first questions when they reach Europe. One of them, he said, is “Do you have WiFi?”

Connecting with family is a top priority for newly arrived refugees who want their loved ones to know they are safe.

Refugees rely heavily on access to the internet to communicate, but there are many hurdles in their way. Researcher Linda Leung defined some of the challenges facing refugees in her paper “Taking refuge in technology: communication practices in refugee camps and immigration detention.” Though the study was of refugees in Australia, refugees in Europe likely also face many of the same difficulties:

It was difficult to earn money in the camp to afford to communicate.

People who owned mobile phones rented them out.

Some people were worried that their family or friends were under surveillance by their enemies.

Refugees can feel distressed if there is no news.

In some places internet cafes are too expensive to use.

Sometimes refugees cannot access any technology whatsoever. Instead, many refugees resorted to traditional forms of communication through messengers, who were used to pass on news and hand-deliver letters to loved ones. 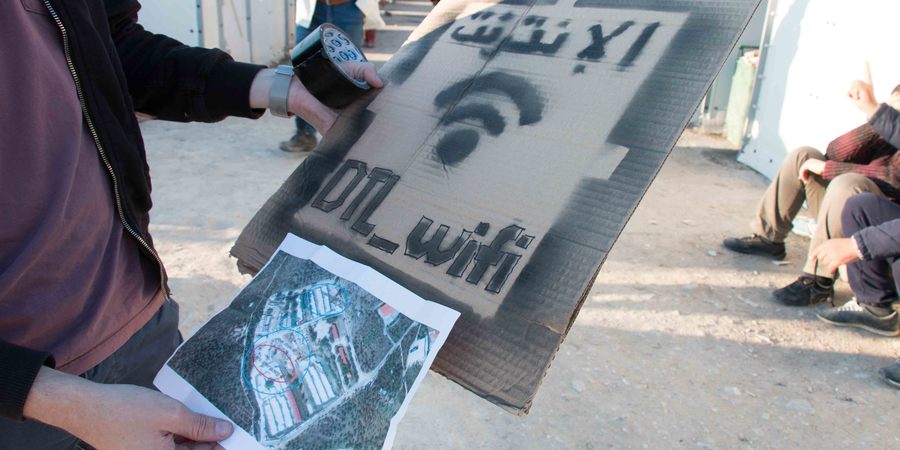 Disaster Tech Lab is a startup offering WiFi infrastructure building in disaster recovery areas and makeshift refugee camps. These were the signs being setup around the camp to indicate presence of internet connectivity. The map of hotspot locations is also visible. Mytilene, Moria camp, 29/12/2015. Photo by Chris Gioran and used under a Creative Commons Attribution-NonCommercial-NoDerivatives 4.0 International License.

In addition to these challenges, many refugees may fall victim to those trying to profit off of these hardships. Leung found that a type of black market appeared to appear at many refugee camps:

To address these challenges, some individuals are offering their help to the refugees seeking communication. Ilias Papadopoulos, a Greek electrical engineer, provided a free internet connection for everyone in Idomeni, a small Greek town located on the border with Macedonia.

This YouTube video describes how he created a set-up to offer this service for free:

He saw that most refugees had smartphones, but without SIM cards or any reliable connection, they had no real way to communicate. So he decided to help one way that could benefit most.

‘It requires a lot of improvisation’

Several startups and NGOs have also attempted to respond to the call for greater communication access for refugees. The organization The Disaster Tech Lab based in Ireland has been deploying wifi networks in the Moria and Kara Tepe refugee camps in Lesvos, Greece. They note that over 400,000 refugees have utilized their network during their stay in the camps. They add:

In addition to the obvious benefits of being able to stay in contact with their friends and family there is also the requirement that asylum applications have to be made via a Skype call. In addition to this schools and learning centers are being set up now that the camps are semi-permanent and these of course all require internet access.

Other groups have made it priority to provide internet access at reception centers in Western Europe, since the government often does not budget for internet access in accommodations. The German organization Refugees Online e.V. first project was providing free wifi connectivity at the refugee reception unit at Fliegerhorst in Fuerstenfeldbruck, and now the project has expanded to 95 facilities across the country. In addition to the access, the organization also provided training and an online learning platform for asylum seekers.

And a start-up company is in the process of developing of what they call an “autonomous rugged wifi hotspot for outdoors and crisis areas.” The company, called MeshPoint, is working to raise the funds to build the prototype for launch where it is needed most.

In their blog, they highlight how the project started in late 2015 when an influx of refugees arrived at the Croatian border, where they were welcomed by the government. They describe how different groups arrived at the scene to provide assistance.

Among them were the volunteers of Osijek chapter of Otvorena Mreža (Open Network), an Open Source inspired movement that aims to provide free internet to everybody. They simply hacked a home router, installed OpenWRT, plugged in a USB 3G dongle, hooked the router to a battery, packed everything in a backpack, and went into the crowd with a “Free WiFi” sign on their backs, antennas sticking out.

Trying to scale and establish a fix hotspot proved to be more of a challenge for the group.

It requires a lot of improvisation, and takes more time that you would hope for. Sensitive networking equipment will often not work well with the petrol fired AC generators, as the choppy voltage will keep crashing it randomly, then there’s waterproofing stuff that doesn’t like to be wet, and then there are cables… Don’t get me started on cables.

Trying to find an acceptable solution for creating an easy-to-install wifi connection to support more than 100 users connected simultaneous was difficult to find. And that's what led to the beginning of the MeshPoint project because they wanted to build the solution themselves.

More than a million refugees and migrants crossed into Europe by sea in 2015, according to the United Nations Refugee Agency. So far in 2016, more than 200,000 have arrived, the majority of them fleeing violence in Syria, Afghanistan and Iraq. Whether it is to reach out to family and friends left behind or to make arrangements for a new life looking forward, access to wifi is vital for them. Hopefully, these individual and organizational efforts continue to help provide refugees this important lifeline.