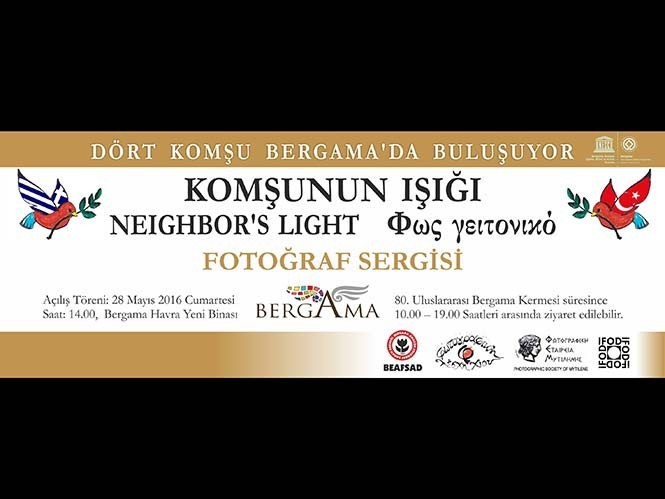 Photographers in the capitals of two Greek islands in the Northern Aegean Sea, Chios (in Chios Island) and Mytilini (in Lesvos), and two Turkish cities on the Asia Minor coast, Bergama and Izmir, are uniting their camera lenses in a common summer project.

Mytilini Photography Association alongside Izmir Photography Group, Chios Photo Club and Bergama Photography Group are co-hosting a collective exhibition titled “Neighbor's Light” (Fos Geitoniko in Greek, Komşunun Işığı in Turkish). The aim is to exchange ideas, knowledge and experiences, and photographers are free to shoot whatever they like, from nature landscapes and portraits of people to still life.

These four cities’ photo clubs have developed a stable friendship and cooperation throughout the years. They believe that peace and friendship is the best way to overcome problems and that art, especially photography, is a medium that can bring people closer together. That's an important sentiment, given the tangled history of war and occupation that exists between Greece and Turkey.

The exhibition kicked off in Bergama, Turkey on May 28. Bergama Mayor Mehmet Gönenç inaugurated the exhibition, and Izmir Greek Consul General Argyro Papoulia also sent a greetings message, according to a brief report by Turkish newspaper Hurriyet.

People participating in the exhibition have shared photos online from their trip to Bergama; check some out on Facebook here, here and here.

The exhibition's last stop will be Izmir, a significant location for many North Aegean islanders, who are the descendants of refugees who fled from there during the Great Fire of Smyrna (now Izmir) during the 1920s.

The exhibition will travel to the other two cities as well. So, if you happen to be around the Aegean Sea coast, don't miss it: July 2 at Chios, August 20 at Mytilini and September at Izmir!