Talk of Spanish as an Official ‘Second Language’ Has Jamaicans Asking, What About Patois? 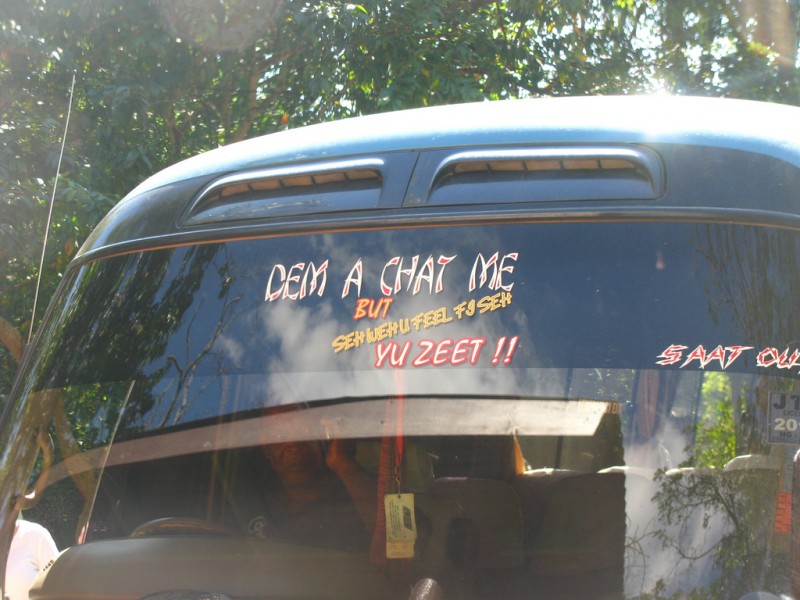 Some Patois phrases being proudly displayed on a bus in Jamaica. Photo by Jason Gullifer, used under a CC BY-NC 2.0 license.

What is Jamaica’s true “official language”? Does it have two? Should it acquire a “second language” and if so, what should it be? These questions have had Jamaican commentators tied up in knots for the past week, ever since Prime Minister Andrew Holness remarked in Parliament that he would like to see Spanish as Jamaica’s “second language”, along with compulsory Spanish teaching in schools.

The prime minister made his comments on his return from a meeting of the Association of Caribbean States (ACS) in Cuba, referring to plans for enhanced cooperation on language learning with that country. His remarks plunged Jamaicans straight into the unresolved and sometimes fierce debate over the use — and acceptance — of Jamaican Patois versus the English language. The discussion continues to reflect considerable divisions in Jamaican society and culture, as well as perceived inequities in its educational system.

If you were to hop from one Caribbean island to the other, you might be surprised at the number of tongues the region speaks. The official languages of Caribbean territories are English, Spanish, Dutch and French, reflecting the region’s colonial legacy, as well as Haitian Creole (Haiti's official language — along with French — since 1987) and Papiamento (which became the official language of Aruba, Bonaire and Curacao in 2003, alongside Dutch). There are also several forms of Creole — including Jamaican Patois/Patwa — and languages such as Garifuna, spoken by indigenous minorities in St. Vincent.

So, some territories do have two official languages, while others, like Jamaica perhaps, have one official and one semi-official language. The debate as to whether Jamaican Patois is a language quite separate from English is an old one, but the argument that Patois should be recognized as Jamaica’s official language has not gained traction in officialdom. Yet, many argue that most Jamaicans cannot (and do not!) communicate in “standard English” — which would mean that Patois is the de facto first language for many of its citizens, with English coming in a fairly distant second. Is there really room for Spanish too?

Many Jamaican commentators — especially those in academia — have not shared Prime Minister Holness’ new enthusiasm for the Spanish language. Patois is regarded as the natural oral expression of the Jamaican people. The much-loved dramatist, poet and cultural icon Louise Bennett-Coverley was a champion of the native language, dragging it out of the shadows in the post-independence era. Professor of linguistics and coordinator of the Jamaican Language Unit at the University of the West Indies, Hubert Devonish, in a letter to the new Education Minister Ruel Reid earlier this year, pointed out:

For the government, the media and for those with social, political and economic influence, the issue of mother language/mother tongue does not arise since, ‘unlike those benighted countries in Africa and the Pacific, thank God, we speak English in Jamaica?’ But, do we?
Well, in a nationwide survey conducted by the Jamaican Language Unit in 2006, 36 per cent of the sample surveyed demonstrated no ability to describe a simple everyday object using spoken English. By contrast, 83 per cent were able to do so using the Jamaican language, 47 per cent demonstrating the ability to use both languages.

There is a tradition to reject Jamaican culture and its products. There were rejections of ska, rocksteady and reggae in their early stages of development just because it ‘came from below’. In latter years the acceptance to the modern music form was overwhelming; but in the issue of the Jamaican language there is a case of self-denial.

One of the major problems concerning crime and development is rooted in the failure of the educational system. The central feature of these problems is grounded in the problem of language — the teaching of our students under the assumption that they are English speakers. This practice, indeed, is a crime against humanity. English language must be taught as a second language. Let us take care of home before we look abroad.

Nevertheless, many Jamaicans are more than a little confused as to what the prime minister actually meant by “second language” — which is, by definition, not the speakers’ native language, but is used in the area where they live (such as parts of the US city of Miami, for example, which are virtually bilingual). This does not apply to Jamaica.

What a piece of foolishness. How can a language the population does not speak be declared a second language?

She qualified this by saying:

I would be first in line to say we should all be fluent in Spanish. It's on my bucket list! Once we are, or a certain percentage of the population, we can talk about official second languages. Right now, it's a ridiculous suggestion.

Yet, most men and women on the street in a quick “vox pop” expressed an interest in learning Spanish, citing its usefulness.

Much of this argument reflects on the state of Jamaica’s education system. Patois is not currently taught in schools, and the performance of Jamaican students in English language is generally weak. Was Prime Minister Holness in fact merely suggesting a stronger focus on the teaching of Spanish in schools? Spanish is not taught in state primary schools, but it is taught in private preparatory schools — prompting Wayne Campbell to tweet about the divide in the school system:

@Petchary All the students in my grade 7 class who attended preparatory schools were able to speak Spanish. The teacher called on them more.

@Petchary There is an urgent need for the Jamaican society to have an official foreign language given the global context we operate.

So, many like Dawn Campbell Douglas believe Jamaica should focus first on the quality of its English teaching, before concerning itself with Spanish:

What is wrong with us? Our education system needs fixing…now! Annual [Caribbean Secondary Education Certificate] results indicate that high school leavers are struggling with English which is our official language. We can go off on a lark when the basics are covered.

@WayneCamo @Petchary to a very large portion of Jamaican society, English IS a foreign language.

Should Jamaicans stick to their beloved Patois, the expression of their culture, as their first language? Or should they focus on raising standards of teaching and learning English, while stepping up Spanish language teaching in primary schools? Should Jamaica adopt two official languages, like Haiti, Aruba, Bonaire and Curacao?

UNESCO concludes in a February policy paper appropriately titled “If you don't understand, how can you learn?”:

By one estimate, as much as 40% of the global population does not have access to an education in a language they speak or understand.

Could this apply to Jamaica and indeed, to other Caribbean countries where Creole is not fully recognized? One thing is certain, however: Jamaicans will continue the Patois debate for some time to come.