Safe in Germany, a Syrian Refugee Learns to Smile Again 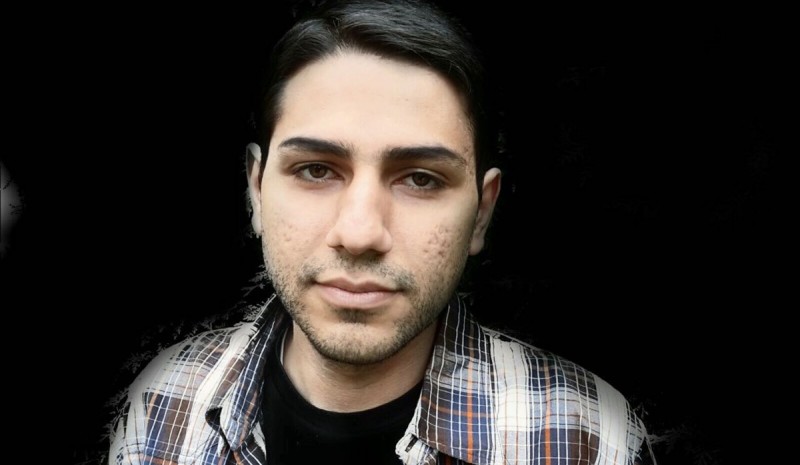 This essay by Hassan Jamous, 24, was originally published on PRI.org on May 31, 2016, and is republished here with permission.

Hurray! Finally, I am in Germany. “Out of the truck,” the smuggler shouted. “We are in Munich.”

I didn’t really care where we were. I just wanted to get out of that chicken truck fast. I took a long breath and I looked around. “Are we really in Germany?” I asked myself. It was the morning. I didn’t see anyone. The other 20 Syrians who were with me in the truck started to change their clothes quickly. I didn’t really have any good clothes. All I had was dirty jeans and an ugly jacket. I didn’t know what to do. I was expecting the police to come at any time and arrest us.

But for the moment I just tried to enjoy the quiet and the clean air after a long, noisy trip. I didn’t know any of the other refugees who were with me. We only met at the smuggler’s house back in Budapest. “Wait for 15 minutes and then go away from here,” the truck’s driver told us. Then he drove away. We waited. And then I decided to look for the first police officer I could find on the road.

“I am no longer in my house. I am not sitting in my kitchen with my family, waiting for my mother to prepare a nice meal. This is my new temporary life now.”

Then I noticed two guys and a little boy looking at me. They were Syrians from Damascus as well. “Where are you from?” asked the oldest one. “Damascus,” I replied. “Do you speak English?” I said I spoke a little bit. “We are going to a city called Saarbrücken. They say the people there are very nice and the procedures are faster there for refugees.” I thought, why not?

We stopped a cab and I told him in English that we wanted to go to the main bus station. “No problem,” he said. “But do you have money?” I answered with a big laugh, “Yes, we do.” It was like he knew that this was our first hour here in Germany. Maybe it was the color of our skin. In the cab, I stared out the window at this beautiful land. Can I build a future here? I wondered. Can I really call this land a second home? My thoughts were interrupted by the taxi driver’s voice. “We are here,” he said.

We took the first bus headed to Saarbrücken. It was a six-hour ride. I spent most of it sleeping like a baby. I was desperately hungry and tired. There was a camp for refugees in Saarbrücken. I saw a lot of nationalities at the camp, not just Syrians. There were a lot of lines and a lot of noise. They gave me some food and sent us to a room. I ate very fast and slept. 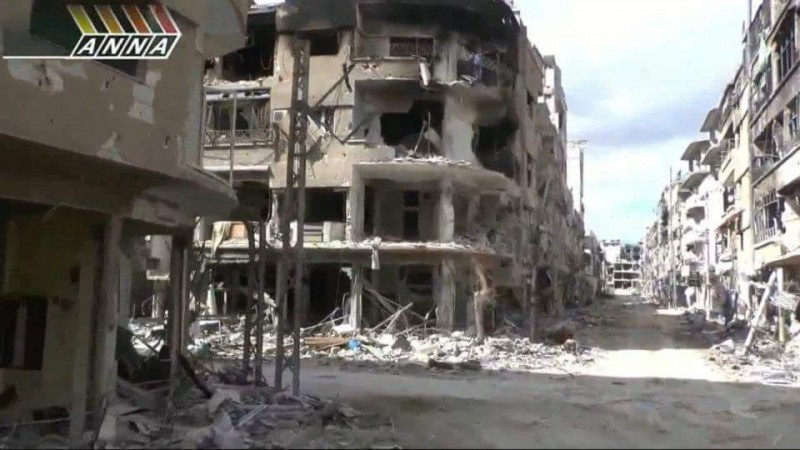 A television screenshot Hassan took of his home street in Syria. Hassan lived in a suburb of Damascus called Darayya, the site of intense fighting between the Syrian regime and rebel forces. (Hassan Jamous)

The first full day at Saarbrücken was very hard on me. I had to wait in lines for food and papers. But I had to just deal with it. I am no longer in my house. I am not sitting in my kitchen with my family, waiting for my mother to prepare a nice meal. This is my new temporary life now. After about a week they transferred me to another camp. I didn’t know why. I asked the administrator and she said kindly that this is normal here in Germany. You will be transferred to another camp in Treir, she told me. She had a very beautiful smile.

They gave us train tickets and a map. During the trip I was looking at the German people’s faces in the train and wondering, “Is it really OK to be here?” I didn’t feel comfortable. Everything was new and I felt weak. The Treir camp was smaller and it contained about a fifth of the refugees that the other camp had. There were no places to sleep. We spent the first night in the hallway. Then we were transferred again. This camp just didn’t have enough space. I was so tired of traveling. I just wanted to be in one place. Everyone treated us nicely. There were big smiles everywhere. They do really have a difficult job. I thought the people would hate us here.

I always had to wait a long time to get on a bus, or to get food, or to get into the shower. You can’t make any real friendships in the camps. You don’t know who will go or who will stay. You just wait to get transferred to a house if you’re lucky.

By my 28th day in Germany, I was used to being in the camps. I had developed strategies to get food. People tried to forget and move on. They played sports to amuse themselves. I thought the children were really happy. They were playing all the time, running and fighting. It was a scene that is hard to see in Syria anymore. I was sleeping in a tent with 200 other people in it. The most difficult part was sleeping. There was always someone doing something loudly — a kid crying or a drunk laughing. It wasn’t a perfect life but we could be patient. At least it was safe.

Finally, they transferred me to a house in a small town called Stadecken-Elsheim. I didn’t really care about the place name, I just wanted to be out of the camp. Already I was thinking about a nice room and maybe cooking myself a good meal. Those were my dreams for the moment. On the day of the transfer, I woke up at 6 a.m. happy for the first time in months. They told us goodbye at the camp in a very nice way. The bus came and I said goodbye in my mind to the camp, hoping I wouldn’t have to come back here again. 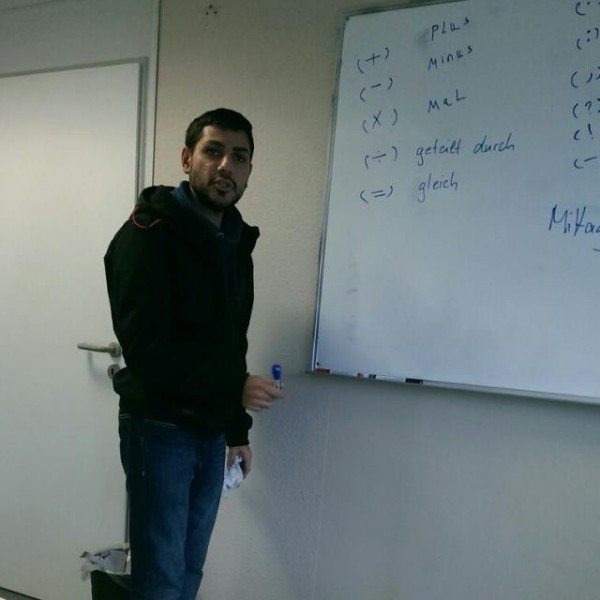 Hassan stands in front of a whiteboard during German language classes in his new hometown. Credit: Hassan Jamous

They drove those of us who were moving to Stadecken-Elsheim to the municipal office first where we registered our names. The employees were very nice and smiling again. They said in English that six people would live in the house until we got our three-year residence visas. That was OK, five is better than 200. They drove us to the house. I didn’t see anyone in the streets but I had the feeling that everyone knew we were coming. Day after day my trust became stronger. I helped my roommates when they wanted to go to the doctors and dentists. At first I was really shy about speaking with the Germans. But wherever I went I saw smiles.

“It occurs to me that everyone here is smiling at us, but we are not smiling. It seems like we forgot how. It seems that in the end I didn’t need food or money or even a safe country. All I needed was a good honest smile.”

One day, a volunteer came to us to help us with everything. She’s teaching us German and we call her Migy. I call her my German mother in my heart. I owe her a lot of things. It occurs to me that everyone here is smiling at us, but we are not smiling. It seems like we forgot how. It seems that in the end I didn’t need food or money or even a safe country. All I needed was a good honest smile.

After 10 months of waiting, I received my residence visa. I am allowed now to stay for three years to work and study. I still have to work on my language skills.

It’s a long road for the future. I don’t feel weak anymore, although I feel in pain each time I hear the news. We did create some problems in Europe. I feel pain when I see new political parties take advantage and get stronger because of us. On the TV we are big in numbers. They are saying that most of us are not educated enough. Or that we are radicals. It’s a price we have to accept for the things that happened in Syria.

But I am a human with big dreams. I will work hard to prove them wrong.

Read the first essay of the series: One Palestinian-Syrian Man's Agonizing Decision to Leave His Home Behind