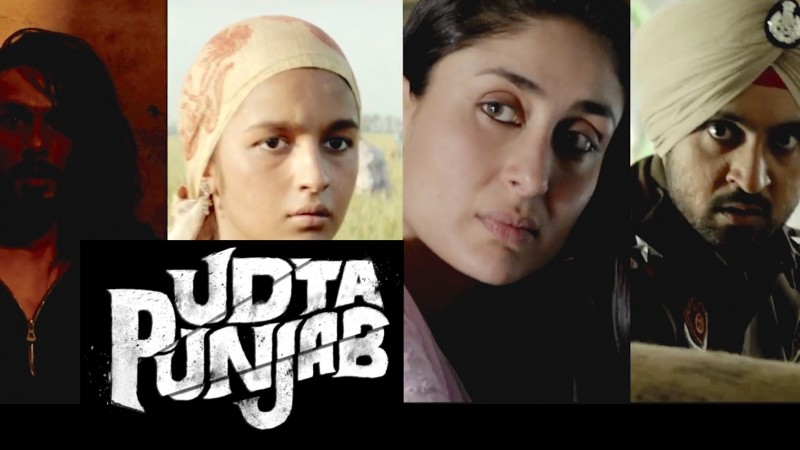 Remix from Screenshots – via the official trailer of UDTA Punjab

Update: June 14, 2016: The Mumbai High Court on Monday finally cleared Bollywood film Udta Punjab with one cut and one modification after a week-long row with the censor board. The judge C.S Dharmadikari told the Central Board of Film Certification (CBFC): “Do not act like a grandmother. Change as per the times now. The CBFC need not be over-sensitive in the matter of art.”

The movie will be released on 17th June and a certificate will be issued by CBFC according to guidelines recommended by the High court.

This is a major victory for India's film industry which has long complained about censorship affecting freedom of speech and expression.

The original article begins below:

With numerous instances of censorship and bans targeting ‘freedom of expression’, Indian filmmakers are up in arms in an attempt to see Bollywood film ‘Udta Punjab‘ released without major cuts on June 17.

It ran into trouble with the Indian censor board which earlier sought 89 edits before a revision committee settled on 13 cuts.

The film's producers including Phantom films and Balaji telefilms have agreed in court on Friday to cut one scene but are adamant that no other deletions are possible.

The producer of the movie, Anurag Kashyap, lashed out on Twitter against this indiscriminate censoring and dragged the Central Board of Film Certification (CBFC) to court.

There is no film more honest than UDTA PUNJAB .. And any person or party opposing it is actually GUILTY of promoting drugs

Bombay High Court bench led by justice Dharmadikari strongly rebuked CBFC chairperson Pahlaj Nihalani and said, “The word censor is not anywhere in the act. Your power is to certify films for public exhibition.”

Journalist Shilpa Rathnam live tweeted from the courtroom as the case was being heard on Friday:

Judge: Why can't you beep the expletives?
Udta Punjab lawyer: This is a realistic film. That's how people talk in these parts.

Judge: It comes down to only one question, does the film glorify drugs?
CBFC: Yes
Judge: Then why have you not banned the film?

Judge: CBFC should only certify, not censor. The public is the biggest censor. CBFC doesn't need to censor.

Pahlaj Nihalani, known for his close proximity to the right-wing government of Indian Prime Minister Narendra Modi had earlier censored various movies for not being in line with Indian culture and sensibilities.

For example, the CBFC, in 2015, blocked the release of a toned-down version of “Fifty Shades of Grey”.

Actually, Pahlaj Nihalani ought to have a really good kiss before deciding if its length subverts Indian culture!! https://t.co/z5VcISZq4c

The bench inspected all the cuts suggested by CBFC on an individual basis and suggested only one cut, which the filmmakers agreed to.

The court cleared all of these from potential censorship and noted their centrality to the film's theme and subject.

Meanwhile, the state of Punjab goes to the polls in 2017 and numerous political parties in India feel that the ‘row’ was manufactured for the benefit of ruling right-wing parties to stifle voices highlighting the drug problem that has laid waste to an entire generation of youngsters.

Various filmmakers, artists and politicians have condemned the censorship board's move to block the movie's release and labelled it ‘against the creative freedom of an artist’.

The final verdict on the plea challenging the cuts is on Monday.

The debate about the movie has certainly sparked a large wave of publicity: the trailer on YouTube had been watched by more than 12 million people.

Indeed, the very fact that you can exert political pressure to prevent the screening of something you find objectionable has opened the floodgates of competitive intolerance. Getting a film censored is almost always an attempt to demonstrate political power, and anything can be mustered to claim hurt sentiments. To rescue our creative industries from the clutches of competitive intolerance, the aesthetic decisions must be depoliticised and professionalised.