What Sparked the Yan Zhou Unrest? China's Information Deficit in the Spotlight 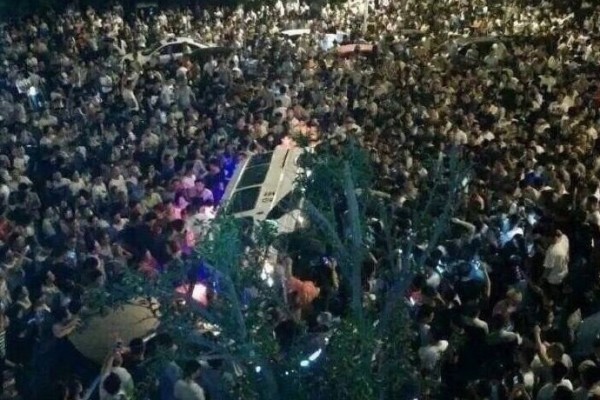 The video below shows angry crowds turning over two police vehicles while police officers from Yan Zhou city in Shandong province escorted a woman from a crime scene June 8.

What made hundreds of people so angry? Why was their rage directed towards police?

The Shandong police released a report via their official Weibo and major state-affiliated media outlets, saying the uproar was caused by a misunderstanding related to a quarrel between two women, while the majority of Chinese netizens had a different explanation of events.

The popularly accepted version of the story runs somewhat like this: Around 9 pm on June 8, four “kidnappers” attempted to steal a three-year-old kid from his mother near a residential neighbourhood in Yan Zhou.

Residents thwarted the “kidnappers”, detaining one woman on the spot while they awaited police.

The crowd quickly determined that the woman suspect, a Han Chinese, was from Xinjiang, a region often associated with criminal activity and separatism in public discourse.

In one of the viral videos of the incident that surfaced on social media, a woman can be heard being questioned by an aggressive crowd and saying: “I haven't yet stolen [the kid]” (我又没偷成).

The video was widely cited as evidence the incident the crowd was responding to was a failed kidnapping. It was later deleted.

According to NTDTV's report the crowd was angry that it took police more than 40 minutes to arrive at the scene and some of them expressed their frustration by flipping over two police vehicles.

The police had to phone in backup to suppress the riot and eventually arrested some 17 people.

The below Weibo post quoted by many news outlets reflected the sentiment of the angry crowd:

I draw a few conclusions from the kidnapping incident from my hometown Yan Zhou city: 1. Ordinary people help each other out, because they can only rely on each other;

2. 110 [emergency number] is just a hot line, whether they deliver the service depends on their mood;

3. Police are too busy putting up traps to catch “prostitution”! They can't make money when a kid gets lost, but get a share of the take when arresting clients of prostitutes;

5. In the future, the police's duty should be specified as arresting [participants in] prostitution and protecting government officials, ordinary people don't need to rely on them.

However, police from Shandong province categorized the incident as a misunderstanding.

The woman suspect was trying to stop a mother from hitting her child, police said, and the two women entered into a verbal argument.

People passing by believed that the woman was a kidnapper, surrounded her and beat her up.

In the process, another man, who was mistaken as a kidnapper was also beaten up.

These two “suspects” were escorted to the hospital by the police.

Many netizens found the official report delusional, with one blogger called “Tea-leaf should stay in water” criticising the official version as follows:

The official version twists the truth and accuses ordinary people of being easily misled. The kidnapper becomes the good fellow who tried to stop a fight, black is washed into white and a bad guy has turned into a hero who travelled across the country from Xinjiang and ended up in Shandong to stop a fight. Who is the ignorant one, people from Yan Zhou city or the state-owned media? In the video, the woman said “I hadn't yet stolen [the kid].” People surrounding her were saying how dare you steal someone else's kid. The woman did not say anything to defend herself. Who is playing dumb? People from Yan Zhou city or state-owned media? You have not condemned the police for their 40 minute-late deployment, you have not condemned the kidnappers. All you have condemned are the people who came to the rescue. Who are the blind ones? People from Yan Zhou or state-owned media?

The above view was echoed by many in the comment thread of the news item:

“I haven't yet stolen” […] Please take a look at the video clip. The kidnapper was wicked and it took the police 40 minutes to arrive at the scene. They turned the vehicles upside down out of rage. If the kid had been stolen, the kidnappers would have left Yan Zhou with 40 minutes grace. People from Yan Zhou have stood by each other and the so-called “rioters” have rescued the kid.

But whichever account was the truth, the episode reflected deep-seated distrust in both local law-enforcement and state media, a point well made in a popular Weibo comment.

What's terrifying is not the misunderstanding but the distrust. This is another outburst [like] similar incidents. Life is difficult – low incomes and heavy taxes. There is no sense of social security and yet [people] have to face humiliation from all levels by the authorities. The incident is just a reflection of their condition, and, in the long run, larger scale outbursts are likely to take place. By that time, rage will not be so easily channelled towards anti-Japanese sentiment.