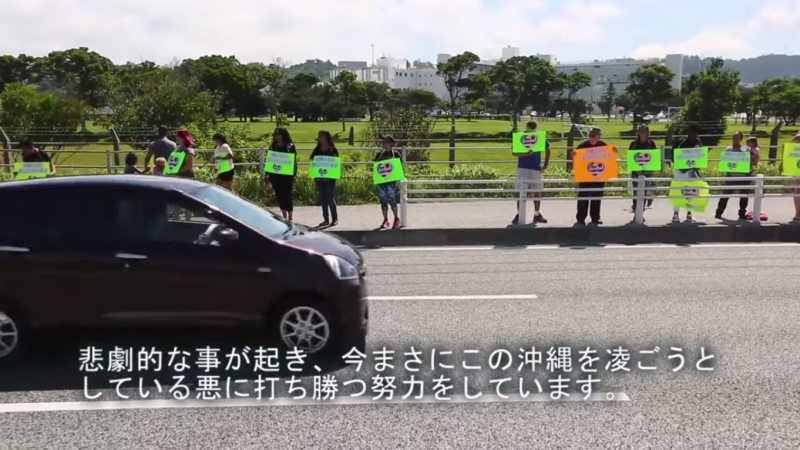 Members of the Okinawa Neighborhood Church congregation offer condolences to passing motorists on Route 58 in Okinawa on May 28, 2016. Caption from English-language narration: “We're really trying to overcome the evil that has come upon this island right now… the tragic events that have taken place.” Screencap from YouTube.

The suspected killing of woman in Okinawa in May 2016 by an American military contractor has strained relations between the United States and Japan, while prompting members of a local American church congregation to publicly offer condolences about what had happened. The case also likely contributed to an election win by an anti-US military base coalition in Okinawa.

Okinawa resident Shimabukoro Rina (島袋里奈), 20, disappeared on April 28 after informing a loved one she was going for a walk. Her body was found on Thursday, May 19. Shortly afterward, a civilian employee of a US military base in Okinawa allegedly admitted to observing and following the woman, sexually assaulting her, and then murdering her.

Shimabukuro's murder, allegedly at the hands of an American working for one of Okinawa's many US bases, generated outrage in Okinawa. The isolated prefecture in Japan's far southwest has long endured regular violence and mayhem at the hands of US service personnel stationed there.

Okinawa residents protest against murder of 20 year Rina Shimabukuro by US Marine in front of gate of Camp Foster pic.twitter.com/AZod3VDEnp

About 20 percent of Okinawa is devoted to military installations, a legacy of Okiniwa’s postwar status as an American “trustee” territory that was only returned to Japan in 1972. Plans to destroy coral reefs for yet another military base has fueled a protest movement that dominated Okinawa prefectural elections held on June 5, 2016, while the news of Shimabukuro's murder was still raw.

Adding fuel to the fire, several days after Shimabukuro's remains were discovered, a US Navy sailor was arrested for drunk driving in Okinawa; the Navy responded by banning all alcohol consumption in Japan for its sailors.

Some American news organizations focused more on the difficulties the United States will likely experience in Okinawa going forward rather than on the fate of the victim and the effect her murder has on the host community. There are more than 100,000 Americans present in Okinawa, whose population is 1.4 million; they mostly are either military personnel and their dependents or Department of Defense civilian employees. 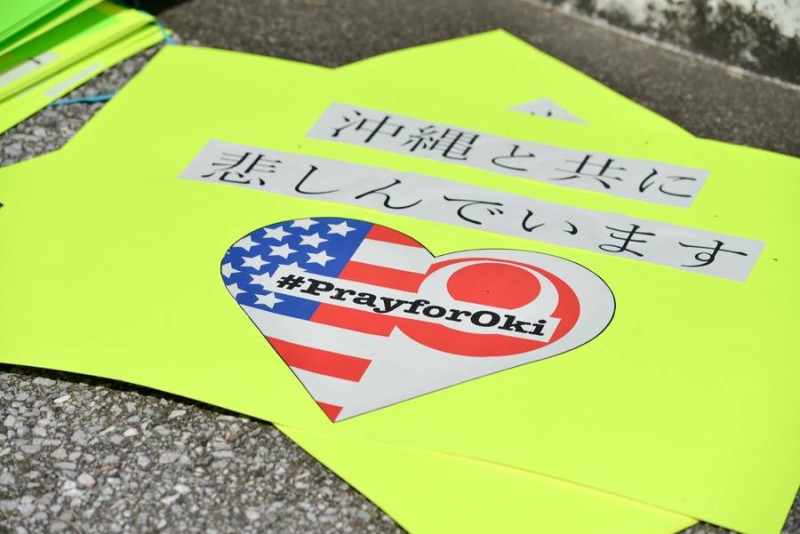 #PrayforOki placard used during vigil. Translation of Japanese: “We mourn together with the people of Okinawa.” Image from public post on Sylvia Ruyon's Facebook page, widely shared on social media.

The Neighborhood Church Okinawa, a Christian congregation serving military personnel based in the prefecture, decided to stage an event in Okinawa in order to “observe a period of unity and mourning” with local residents.

The “Silent Memorial” was held on a busy thoroughfare May 28. Congregation members held up homemade placards and signs to offer condolences to the residents of Okinawa and show their sorrow for what had happened. The event was well organized, with professional photographers and a public archive of 149 photographs, and hashtags, including #prayforoki, for easy sharing on social media.

Silent Memorial – #PrayForOki Following the incident in Okinawa in April, American military personnel, their families and civilian employees of the military organized an event. 149 photos can be found at this link: https://t.co/KTkaymil5a pic.twitter.com/NZopwJpR0v

Although Okinawa is never ever referred to as “Oki” by Japanese people, social media users in Japan took notice of the memorial effort. In a tweet shared more than 57,000 times, one Japanese business traveler noted:

When I left my hotel and started driving down Route 58, there were Americans standing under the torrid sun with their heads bowed. They seem to be in deep pain. There are lots of good people out there.

‘Let us not be overcome by evil, but overcome evil with good’

Neighborhood Church Okinawa also produced a video of the event that has been uploaded to Facebook and YouTube. The US Marine Corps in Japan provided accurate Japanese-language translations.

The video is notable not only because it is professionally produced and ready to be shared on social media or even run as part of a news cast, but also because of the language the narrator uses. The rape and murder of Shimabukoro Rina allegedly by an American employee from one of the bases in Okinawa is never explicitly mentioned.

Instead, her killing is referred to obliquely as “the tragic events that have taken place” or “the evil that has come upon” the island of Okinawa. It's also suggested the way to resolve the problem is to “pray for Oki”, rather than more concrete proposals, such as revising the Status of Forces Agreement (SOFA) to formally allow Japanese authorities to prosecute American service personnel accused of a crime. Currently, crimes are handled on a case-by-case basis, and accused American service personnel sometimes are not handed over to Japanese authorities.

‘Silent memorial could be construed as being anti-base’

Although the silent vigil was limited to prayers, throughout the process of developing a response to the murder Neighborhood Church Okinawa apparently struggled to conform to the official US Forces Japan stance on American bases in Okinawa.

It also faced concerns that the vigil could be understood as a political statement. According to the Los Angeles Times in a story republished in the Okinawa edition of Stars and Stripes:

Christian Siangco, the pastor [of Neighborhood Church Okinawa], said he fielded numerous phone calls warning him that his plans for a silent memorial could be construed as being anti-base, and suggesting it might be better to lie low.

Ultimately, the church's silent memorial was successful, not only in conforming to US military policy and coordinating with with the PR arm of the US Marine Corps, but also in reaching out and connecting with Japanese citizens.

The discovery of Shimabukuro Rina's body, combined with the confession by the American suspect, occurred in the lead-up to the May 27 G7 meeting in Japan, and US President Barack Obama's historic trip to Hiroshima. The Abe government called US Ambassador to Japan Caroline Kennedy in for questioning, and lodged an official complaint.

It’s important to understand how deep & how big an issue this is here. — @CarolineKennedy on Japanese girl's death pic.twitter.com/XA281Ogpzn

The Abe government's decision to do so was likely in part an attempt at damage control before local Okinawa elections scheduled for early June.

In September 2015, Onaga spoke before United Nations Human Rights Council in Geneva to “sound an alarm” about the relocation of the US Marine Corps Air Station Futenma in Okinawa to Henoko.

Following Onaga's election win, Japan's central government promised to send more police to Okinawa to help oversee American forces there. What Onaga and his allies hope to do is revise the Status of Forces Agreement (SOFA) to give local governments more control over US military personnel.

At the moment Onaga and his allies are enjoying momentum. Unfortunately, it was provided by the murder of a Japanese woman allegedly by an American man.