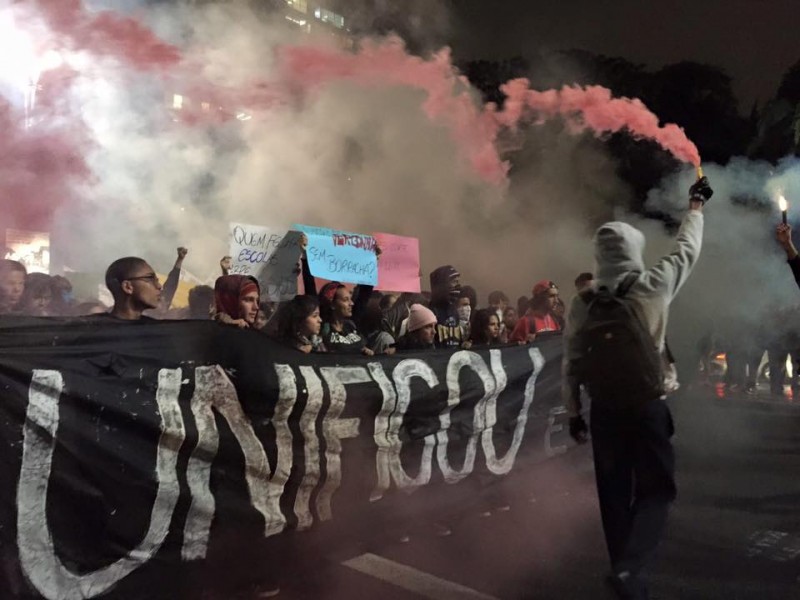 Demonstration of students in São Paulo. Photo via Não Fechem Minha Escola and Jornalistas Livres, free to use.

At the end of 2015, a wave of occupations swept public schools in the Brazilian states of São Paulo and Goiás at the end of 2015, with hundreds of educational institutions taken over by their own students who were protesting budget cuts.

In the past two months, the movement has resurfaced and spread to other states, including Rio de Janeiro, Rio Grande do Sul and Ceará. And in São Paulo, student protesters have the added complaint of an alleged fraud scheme dubbed the “Lunch Money Mafia” involving public servants and politicians.

According to information shared on the occupations’ social media pages, a collaborative map and multiple news sources, more than 300 schools have been occupied at some point between late April and June in seven Brazilian states. That number doesn’t take into account schools, like the Prefeito Mendes de Moraes school in Rio de Janeiro, which came to be occupied earlier in 2016. Authorities have evicted several occupations in that same period of time.

Students are protesting against the dismal state of public schools in Brazil and demanding better teaching, infrastructure and food. A characteristic of the occupying students, who generally are between 13 and 17 years old, is their zeal for public property. They take turns in cleaning and maintaining school equipment, which has led some students to the discovery of brand-new school materials locked away in their schools, according to news reports. Support from the general population has allowed several cultural activities to take place, such as music concerts and classes taught by volunteer teachers.

The movement began in the city of São Paulo between September and December 2015, when 200 public schools were occupied against a “reorganization” proposed by the state governor Geraldo Alckmin that would have forced 93 schools to close. The movement was successful in forcing the government to cancel the plan and ended up inspiring a flurry of occupations in the state of Goiás, where a different plan, aimed to outsource the management of public schools to private organizations, the army and the military police, was on the table. Thirty schools were occupied in Goiás at different moments starting in January; the last occupation was vacated in March.

The movement found new life in São Paulo in May this year after state prosecutors revealed a fraud scheme dubbed the “Lunch Money Mafia“, in which public servants and politicians gave overpriced meal contracts to suppliers in exchange for bribes. The scheme allegedly involved Fernando Capez, a state deputy and president of the Legislative Assembly of São Paulo, who is a close ally of Governor Geraldo Alckmin.

School meals offered to students in most São Paulo state schools are notoriously lacking — if there is a meal available at all.

At least 14 schools have been occupied in São Paulo; most of them were vacated a couple of weeks later, according to newspaper Folha de S. Paulo. Students are also mobilizing in different ways, like street protests. In early May, they also occupied the plenary of the assembly demanding the creation of a Parliamentary Commission of Inquiry (CPI) to investigate the scheme. Under pressure, deputies filed a request to open it, the first step in the procedure to create a CPI. 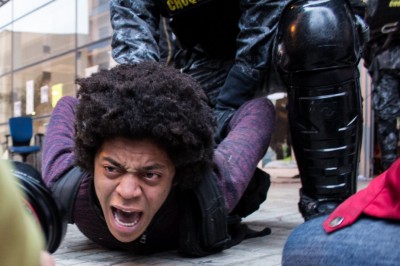 A student is detained by military police in São Paulo. Photo: Roger Padula/Democratize, free to use

As in 2015, the students’ activism has been treated violently at times by police. Independent media agency Democratize followed the eviction of three schools on May 13 by military police, done so without a warrant:

The Attorney General of the State of São Paulo, defending the Governor Geraldo Alckmin (of the Brazilian Social Democracy Party, or PSDB), directed the state departments to from now on make public property repossession occupied by protesters without recourse to justice.

Authoritatively and without a warrant, at least three occupations were raided by police in a truculent manner on the morning of Friday (13).

On the same day, media collective Jornalistas Livres followed the eviction of the Board of Education of the Central West Region (DECO), which also occurred without a warrant:

On 19 May, a march of students toward the Department of Education was violently suppressed by police. At least four students were arrested and several were injured, according to Democratize. In this video, released by the Facebook page O Mal Educado (The Poorly Educated), a student shows the head injury he says he received from police:

‘This is the “democracy” we live in!’

After vacating the schools at the beginning of the year, students from Goiás continued to mobilize against the plan to outsource school management. They also adopted São Paulo's original agenda for the improvement of the quality of the meals provided.

A protest on May 19 was repressed by the state's military police, as shown in a video posted by YouTube user Desneuralizador Brazil.

A student from Goiás, Ana Beatriz Tavares, wrote on her Facebook profile about the protest: 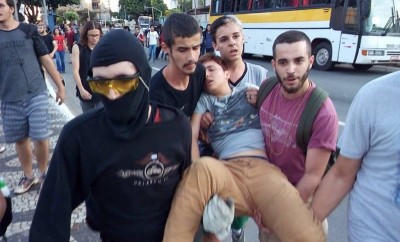 A student is carried by schoolmates during the protest in Goiás. Photo by Desneuralizador, free to use.

Today, in a peaceful demonstration against the OS's [Organização Social or Social Organisation, name given to private companies that run schools] we were repressed by the military police (the one whose role it is to take care of your security, right?)

We asked for the secretary of science and development to come down and receive our document with all our demands. He did not came down, but sent the state's hand against students fighting for a better education. They arrested, threw tear gas, fired at and beat students. Meanwhile, an act against the legalisation of abortion organized by SEDUCE took place, which took a bus with students of military schools for this “march”, but police did not repress these students, what is that?

This is the “democracy” we live in!

The page Desneuralizador posted a series of photos capturing the scenes of repression and those who were wounded by the military police, as well as a video showing the violence there.

‘This is a great victory’

In Rio de Janeiro, according to a collaborative map, 80 schools have been occupied by students — although some of the occupations have already been dismantled.

Besides the general agenda of better teaching and infrastructure, each school occupation also has specific requests. For example, at the Colégio Aplicação, which is linked to Rio de Janeiro State University, students demand that the government provide food free of charge, as the school canteen is outsourced and students have to pay for their own food.

One of the most remarkable episodes of the movement in Rio was the eviction of the Prefeito Mendes de Moraes school on May 16. This was the first school to be occupied by the students, in March, and had been experiencing constant invasions and threats by a counter movement against the occupations, known as Desocupa (De-occupy). One student reported that members of Desocupa stormed and vandalised the school on May 10 and the occupants had to withdraw temporarily from the school to protect themselves.

The final eviction took place peacefully after police received a court order to vacate the building. Students of Mendes de Moraes convinced the State Department of Education to establish a commission to visit each school that was occupied to analyze what each unit needs and issue a document promising emergency reforms in the amount of 15,000 reais (about 4,400 US dollars). Student João Victor told newspaper Folha de S. Paulo:

We are vacating with joy because we can pass on our power to organize, to act. It was 56 days of resistance, despite attacks from all sides. Many of our demands were met and this is a great victory. Mendes was the key that opened the door for the remainder of the fight and it would be unfair to abandon this cause. We leave here, but we continue with our brothers in other schools.

Elsewhere in Rio, students occupied the state Department of Education (SEEDUC) on May 20 and were forcibly removed by the military police the next day, as the video by YouTube user Victor Ribeiro shows:

The SEEDUC was occupied again on May 30. 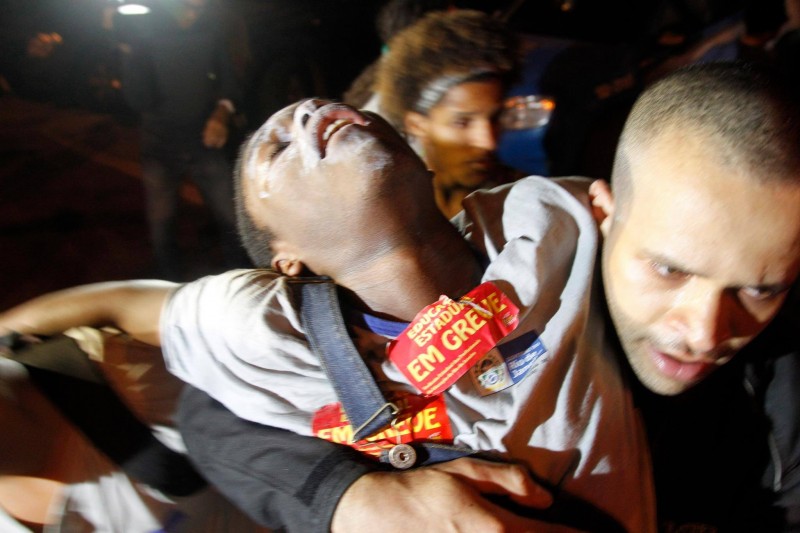 A student is carried while the military police vacates Rio's Department of Education. Photo by Desneuralizador, free to use.

Rio Grande do Sul, Ceará and other states

The movement seems to be spreading nationwide, with new states joining the protests. In Rio Grande do Sul, in southern Brazil, there are currently 158 schools occupied — an impressive number for a movement that began on May 16. Those students have faced repression and violence.

In Ceará, in the northeast, 56 schools have been occupied. In both states, secondary school students joined teachers of the state who had gone on strike, according to Democratize.

In the state of Mato Grosso, 14 schools have reportedly been occupied against a private-public partnership that would outsource educational services.

At least one school was occupied in Maringa. Students have also mobilized in the states of Bahia and at the Federal District, and at least two schools have been occupied in the northern state of Pará.