Researchers Around the World Are Learning From Indigenous Communities. Here’s Why That’s a Good Thing. 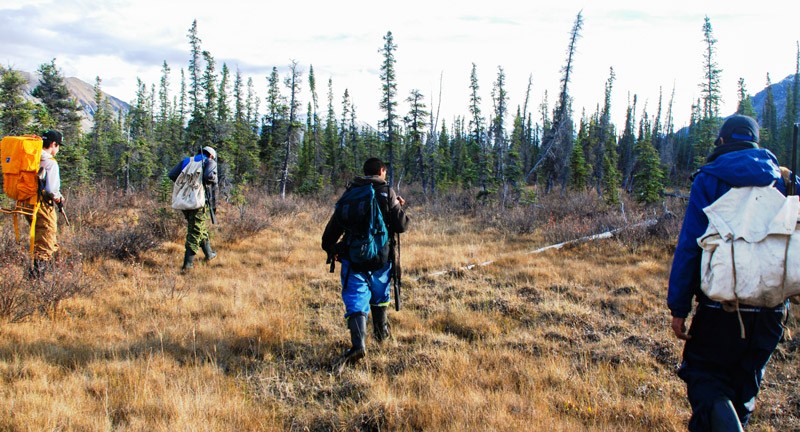 This post by Ben Goldfarb was originally published on Ensia.com, a magazine that highlights international environmental solutions in action, and is republished here as part of a content-sharing agreement.

In the rugged Sahtú Region of Canada’s Northwest Territories, a district so remote that in winter only a single treacherous ice road connects it to the outside world, life revolves around caribou. For millennia, the Dene people lived as nomads, tracking vast herds across the Sahtú and harvesting the itinerant animals for their meat, skin and bones. Although the region’s indigenous people today reside in villages, subsistence hunting remains central to diet and culture. The Dene language contains phrases for such concepts as “we grew up with caribou blood” and “we are people with caribou.”

That intimate relationship did not always coexist comfortably with empirical science. Wildlife biologists had long studied caribou by swooping down in helicopters, netting them and affixing them with radio collars, a process that some Dene saw as disrespectful to creatures they considered kin. In September 2012, the Sahtú Renewable Resource Councils passed resolutions recommending that all wildlife research involve local people and respect indigenous values. Biologists could still collar the caribou, but they now had a directive to pursue more respectful, non-invasive methods as well.

The task of developing new techniques fell to a team of scientists that included Jean Polfus, a natural resources Ph.D. student at the University of Manitoba. Polfus’ introduction to the Northwest Territories wasn’t an easy one — “it was completely dark, it was cold and a lot of the meetings happened in Dene language,” she recalls — but, over the course of many conversations with community leaders, she and her local collaborators concocted a visionary project: They would study caribou populations using DNA extracted from scat. Dene hunters and trappers, who regularly cross paths with the herds during their travels on snowmobile, would collect droppings — with each sample that Polfus received earning its finder a C$25 gasoline gift card. “It’s a lot cheaper per sample than collaring caribou,” Polfus says.

Although biologists and indigenous people have worked together for centuries, the relationship has tended toward friction. Scientists often looked askance at traditional knowledge, sometimes with harmful consequences for both science and indigenous livelihoods. In the 1970s, for instance, U.S. federal researchers concluded the Bering Sea’s bowhead whale population was shrinking, prompting the International Whaling Commission, a global organization that manages whale conservation and whaling, to impose drastic hunting restrictions on indigenous communities that depended on the cetaceans for sustenance. Alaska Natives objected, pointing out that, while government scientists only counted whales in open water, bowheads also passed through heavy ice, deploying their massive skulls to crack open breathing holes. When the National Marine Fisheries Service finally used native feedback to guide its surveys in the 1980s, it nearly quadrupled its whale estimate.

“The hardest thing is to sit in a room with scientists who think they’ve discovered something, but their scientific discovery just confirms what our oral histories have talked about forever,” says William Housty, a member of British Columbia’s Heiltsuk First Nation and director of Coastwatch, a science and conservation program. “That’s been the biggest hump for us to overcome, to get people to think about our culture on the same level as Western science.”

Rocky though the transition has been, wildlife biologists like Polfus are today pursuing more respectful and participatory relationships with indigenous people. Scientists have partnered with Aboriginal Australians to study sea turtle populations; relied on Kaxinawá hunters in the Amazon to investigate the abundance of game species like monkeys and deer; and solicited information from Alaskan Yupiks about walrus migrations. Renata Leite Pitman, a Brazilian wildlife veterinarian who’s studied Central and South American fauna for 25 years, has leaned on local expertise to learn the calls, scats and tracks of the elusive forest animals she studies. “I think it’s intuitive — you just learn from what the native people have always been doing,” she says.

Pitman’s latest collaboration involves the Waorani tribe, Ecuadorian natives whose young men catch and release green anacondas, the world’s heaviest snake, as ritual tests of manhood. Since 2014, Pitman has inserted radio transmitters in six anacondas in Ecuador and Peru to study the species’ movements in the Amazon. She also trained Waorani tribe members to tag and track the snakes; indigenous technicians provide her daily updates via Skype. Pitman and her Waorani partners extracted samples from both anacondas and bushmeat, which the scientist tests for contaminants stemming from upstream oil exploration. The giant reptiles have effectively become ecological indicators whose own flesh reflects the health of the Waorani’s homeland.

Pitman’s tracking has not only revealed secrets of anacondas’ wanderings — the snakes appear more territorial than she’d realized, for instance — it also stands to provide valuable knowledge for the Waorani, who draw considerable income from ecotourism. “They want to get benefits from taking people to see the anacondas,” she says. “This could be a long-term help for the economy.”

Collaborative research can yield even more surprising gains. Marco Hatch, a member of the Samish Indian Nation and a marine ecologist at Northwest Indian College in Washington state, studies the Canadian Pacific Coast’s clam gardens — well-groomed intertidal terraces, surrounded by rock walls, in which coastal people have dug shellfish for thousands of years. Hatch’s research, conducted in partnership with the gardens’ native owners, suggests that clams grow larger and more abundant in gardens than in the wild and that other edible species, like crabs and snails, thrive on rock walls. “Nonnative beach owners can manage their beach more effectively using tools and technologies that First Nations people have developed,” Hatch says.

His findings also challenge the long-held notion that the Northwest’s indigenous people were strict hunters and gatherers. “Clam gardens give us these very large and undeniable modifications of the intertidal,” he says. “They show the complexity of indigenous food and knowledge systems.”

Look to the North

Hatch and Polfus aren’t the only scientists to pursue collaborative research in Canada, where a slew of court cases have acknowledged native authority in natural resource management. That’s set the stage for programs like the Heiltsuk’s Coastwatch, an initiative rooted along British Columbia’s Koeye River, where grizzly bears fish for migrating salmon in dense coastal rainforest. In 2007, Housty and other Heiltsuk, with help from conservation groups and scientists at the University of Victoria, set up a network of barbed-wire snares, baited with salmon scent, that snagged clumps of bear hair for DNA analysis. The monitoring program revealed the presence of a grizzly “highway” along the Koeye, and helped the Heiltsuk better manage their own relationship with the bruins — for instance, by moving their youth camps away from the most heavily trafficked areas.

Just as significant as the study’s results were its guiding principles: the Heiltsuk’s Gvi’ilas, a body of traditional laws that shape the First Nation’s relationship with the natural world. Just as the Dene’s cultural values led them to insist upon noninvasive caribou research, so did the Gvi’ilas call for unobtrusive hair monitoring. “Those very fundamental ideas formed the base of everything we did,” Housty says. “One of the biggest ones was respect. If you treat bears respectfully, they’ll treat you the same way.”

There’s a fine line between collaborating with indigenous people and exploiting their labor and knowledge.

Yet that respect isn’t always reciprocated by the powers that be. According to Housty, when the Heiltsuk presented the provincial government with their map of grizzly habitat, officials shrugged off data that clashed with the province’s existing maps. “So we said, to heck with the government — we’ll just go right to industry,” Houst recalls. The Heiltsuk presented their habitat maps to local logging companies, which proved to be more interested than was the province. “They gave a little, we gave a little, and we could show them where it was appropriate to log,” Housty says.

If the Heiltsuk can’t make headway with the B.C. government using hair snares and DNA analysis — tools of Western scientific research — it shouldn’t come as a surprise that native knowledge still receives short shrift in many quarters. Elsewhere in British Columbia, First Nations reports of grizzly bears inhabiting coastal islands were dismissed by the government because the observer “was not a biologist”; subsequent DNA analysis showed that 10 islands hosted resident grizzlies. According to one 2008 caribou study, some scientists remain guilty of using traditional knowledge “only when it fits within current resource management models of thinking.” There’s a fine line between collaborating with indigenous people and exploiting their labor and knowledge.

The technical language of resource management can also thwart authentic cooperation. In a 2004 essay, anthropologist Marc Stevenson detailed how seemingly innocuous words like “harvest” and “quota” can dominate co-management discussions and exclude native people from decision-making. When Stevenson sat on a whale management board in eastern Canada, he observed that Inuit hunters refused to use the word “stock” to refer to belugas — the concept didn’t exist in Inuktitut language. Such utilitarian terminology, warns Stevenson, may be “not only foreign, but antithetical to Aboriginal values, concepts and understandings.”

Cautionary tales notwithstanding, collaborative research is on the upswing, and Polfus’ caribou scat project offers an encouraging example. Though the effort was slow to catch on — as Polfus points out, “When it’s minus 40 out and you’re on your Ski-Doo, who wants to stop to pick up caribou poop?” — word gradually spread. Over two years, Polfus, known locally as Poop Lady, received over a thousand scat-filled plastic bags; her army of bounty hunters included everyone from elders to 12-year-old girls.

Polfus’ DNA tests revealed three genetically distinct forms of caribou — boreal woodland caribou, barren-ground caribou and mountain caribou. Although the three types generally occupy distinct habitat, they often overlap in the boreal forest, bewildering wildlife biologists who aren’t sure where one subspecies’ range ends and others’ begin. No such confusion exists among the Dene, whose language includes separate words for all three types. Dene hunters can distinguish between caribou varieties on the basis of morphology, tracks and even behavior; woodland caribou, for instance, will loop back around on their own path to throw off predators.

That the Dene have developed different terms and hunting tactics for each type, says Polfus, suggests that the caribou diverged in the distant past. Paying heed to indigenous language, in other words, advances science’s grasp of evolutionary history and helps researchers identify subtle but crucial differences between subspecies.Authorities are already taking note: As a result of Polfus’ research, the Sahtú Renewable Resources Board has pledged to use the Dene word for boreal woodland caribou, tǫdzı, in all official correspondence.

In the far North, studying caribou population ecology is anything but academic. Shale-oil development is inexorably coming to the Northwest Territories, and a better understanding of caribou ecology and population dynamics should help biologists and indigenous hunters manage both industry and wildlife.

“When you support the knowledge of people who have a lot of incentive to keep caribou around for their children,” says Polfus, “that’s when real conservation success can happen.”

Ben Goldfarb is a freelance environmental journalist whose work often focuses on fisheries and wildlife management. His writing has appeared in publications including The Guardian, Scientific American, Earth Island Journal, OnEarth Magazine, and High Country News. He tweets from @ben_a_goldfarb.