For Stunning Glimpses of 20th-Century Nepal, Check Out ‘Nepal in Pix’ on Twitter 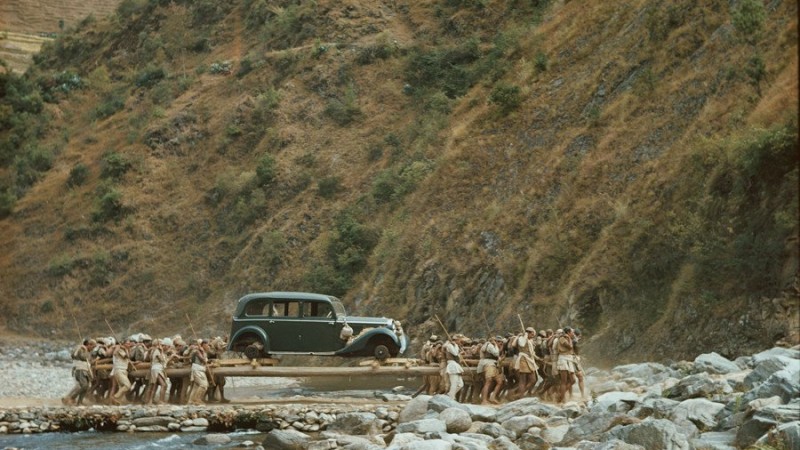 Porters carrying the first car to the Kathmandu Valley. Image via Twitter/NepalInPix

Throughout history, Nepal has represented a land of mysticism to travellers from abroad. Nepal’s high Himalayas with the world’s highest mountains, the mid-hills and valleys abundant with rare rituals and traditions, and the southern plains with dense forest and wild animals have always attracted curious visitors to this landlocked country.

Though Nepal is not untouched by modern development, images from only few decades ago take you to a different world. The Twitter account Nepal in Pix publishes images from that era, providing an idea of what life was like not that long ago.

To start with, here’s an image of Nepal’s Public Service Commission (Lok Sewa Aayog) examinations, the mode of entry into government jobs, being held in open fields in the Lamjung District of Western Nepal.

The television set was a rare item in the 1980s. This image shows young men with a television, posing for a picture in the alleys of Kathmandu Valley.

In the 1960s, hippies frequented the Kathmandu Valley. Marijuana and hashish was legally sold here and even a street near the Kathmandu Durbar Square was named ‘Freak Street’.

The below image shows how the party scene in Kathmandu looked like in those days, depicting the fashion trending among young people:

When monarchy was at the helm, the king and queen were considered a beacon of hope, and people waited in long queues to get a glimpse of the rulers.

People waiting for the arrival of the king & queen at Jumla Bazaar in 1978. #Nepal pic.twitter.com/ryyz2P0ROz

The New Road leading to the Kathmandu Durbar Square in the heart of Kathmandu was really new with very few vehicles around.

Cars, the possession of rich and powerful, were rare for the general public and so were the car dealers. The below image shows one such car dealer:

While the Kathmandu Valley was advancing towards modernization, the southern plains was still a dense forest and a haven for hunters and guests of royal families. The below image is from one of the historic royal hunts with British royals as guests – killing several wild animals.

King George V with the day's kill in Dec 1911. A total of 39 tigers, 18 rhinoceroses & 4 bears were killed. #Nepal pic.twitter.com/aLjGeBe4jR

The Rana clan of prime ministers held power in their hands for almost 104 years until 1951, reducing the Shah kings to figureheads during their rule. For their part, the Shah dynasty's rule came to an end in 2008. Here’s an image of Prime Minister Chandra Shumsher Jung Bahadur Rana with his brothers.

Only some 40 years ago the Bagmati River and its banks were clean and odourless – just the opposite of what it is today.

46yrs ago! Ghats along the Bagmati river, Kathmandu in 1969. #Nepal (by Douglas Hall) pic.twitter.com/CXP6SlRSkD

The Boudhanath Stupa, surrounded by tall buildings today, was a perfect site to loiter around, pray and meditate.

While flags of all countries are quadrilateral, Nepal’s flag is the only non-quadrilateral one. See how the flag looked like earlier.

Nepal’s stamps are a hit among philatelists and especially these first stamps are rare to find these days.

The first stamps of Nepal on cover, 1881. pic.twitter.com/ciCRhaL4rZ

The Tribhuvan International Airport, the only international airport in the country, looked fairly basic in the 1950s.

Tribhuvan International Airport during it's beginning in 1950's pic.twitter.com/0wiV0DJVzN

Not only the aviation industry but also road transportation was in its infancy. This image gives a glimpse of travelling in those days.

And this image, taken just few 30 years ago in Bhaktapur of the Kathmandu Valley, shows a man carrying his child in kharpan, usually used for carrying vegetables and other items:

While other modes of transportation were introduced relatively late in history, Nepal was leading in terms of ropeway. The below image of the Hetauda-Kathmandu Ropeway, not operational these days, was a crest in Nepal’s transportation history.