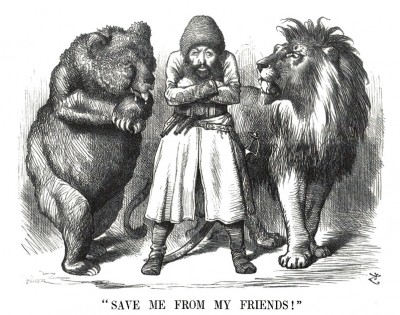 After decades of corruption and centuries of manipulation at the hands of foreign powers it makes sense that Afghan social media users are partial to a conspiracy theory or two.

Whenever something goes wrong in the country, which is often, the chief culprits that surface in Facebook discussions are typically the superpowers of the colonial and neo-colonial age — Britain and the United States — or irksome neighbours Iran and Pakistan.

But while none of those countries can claim to have done more good than harm to Afghanistan, is everything always really their fault?

The interference of the British Empire in Afghan affairs dates back to the nineteenth century but retains its place in the nation's political psyche up to the present.

In the so-called Great Game in the 1800s, London and Moscow plotted against one another as the British empire looked nervously north at its Russian counterpart.

Afghanistan was less important in and of itself to Britain than as a means to protect India — the jewel in the crown of the British empire — from an encroaching Russia.

Even today, the current borders of Afghanistan, which provide important context for the state of inter-ethnic relations inside the country, are a product of the agreement between the two powerhouses.

Today, however, the British have mostly been replaced by the Americans as a lightening rod for popular resentment.

US involvement in Afghanistan has its roots in Washington's support for the Mujaheedin who waged a struggle against the Soviet military intervention in the country during the 1980s.

Participants in that struggle can now be found in the ranks of both the Taliban insurgency and the civilian government in Kabul, but it was Washington's own invasion of the country in the aftermath of 9/11 that made it a prime target of rampant public suspicion.

America is the mother of Daesh [ISIS] and the grandmother of the Taliban.

It supports Daesh by injecting Dollars

It supports the Taliban by injecting Pakistani Rupees.

The Taliban's persistence even in the presence of the Washington-led ISAF military coalition has led many people to believe that the group is nothing more than a Western puppet required to justify the extended presence in Afghanistan of foreign military forces.

The same now goes for ISIS, to whom a number of Taliban splinter groups have already declared allegiance.

Almost all Afghan communities have cultural and ethnic ties with neighbouring countries, which makes for another rich source of conspiracies whenever a given group mobilizes.

The religious and cultural ties of the Hazaras to Iran have turned into an Achilles heel for that community.

Recent protests against controversial government plans to re-route an electricity line in such a way that would bypass areas where ethnic Hazaras live were depicted by many social media users from other groups as an Iranian plot to destabilize the country, for instance.

This has paralysed the community's ability to to air legitimate grievances and  claim its rights.

All Hazaras are fascists, Iranian handymen and ungrateful, except Ramazan Bashardoost [a Hazara MP known for not taking sides in inter-ethnic disputes]. He might be bastard, but otherwise, all the Hazaras are Khomeini's loyal sons.

Tajiks — the country's second most populous group after Pashtuns — are often tarred with the same brush due to their linguistic and cultural links with both Iran and ex-Soviet Tajikistan.

Meanwhile, many members of different ethnic groups see Pakistan's footprint in the Taliban and other militant movements that have a mostly Pashtun constituency.

The prevalence of suspicion and conspiracy both on Facebook and off it is a hindrance to the country's social development.

Firstly, it denies Afghans of the agency needed to change the country's course and lets a corrupt and misfiring government off the hook.

Essentially, by tapping into these conspiracies state officials can externalize the source of their failures and escape scrutiny for their own misdeeds.

In fact, government may even go further, fuelling these conspiracies on social media by sponsoring specific users and pages.

(One Kabul-based newspaper, 8 am, writes that the government pays money to specific news agencies and social media users under a scheme called, operative finance).

But apart from that, the focus on external threats leads to a superficial understanding of the country's challenges, and thus a failure to find appropriate solutions.

Blaming the Pakistanis for the longevity of the Taliban is the most obvious example of this trend, encouraging Afghans to overlook the internal and indigenous roots of insurgencies and extremism.

This post is part of a series of posts on Afghan social media. See also Is Social Media Helping to Perpetuate Violence in Afghanistan and In Afghanistan, Social Media Gives Rise to Hate Speech.