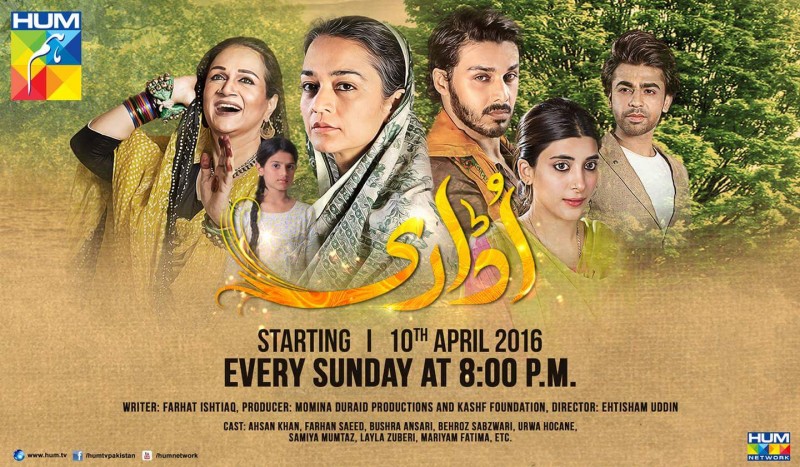 A poster for Udaari. Photo from Wikipedia.

The Pakistan Electronic Media Regulatory Authority (PEMRA), which polices the country's radio and television broadcasts, recently issued a “show-cause” notice to a TV channel regarding a drama series that portrays the issue of sexual abuse against children. The “show-cause” notice legally requires the network to justify why it was necessary to broadcast this material. If the network fails to satisfy the regulators, it faces fines and other penalties. PEMRA has also demanded that TV stations across the country explain why they air advertisements for contraceptives.

The TV series in question is “Udaari,” a drama show that focuses on the social and economic marginalization of women and also highlights issues like child labor and child abuse. PEMRA is demanding to know why the network airs the show, which it describes as “immoral content.”

The notice specifically addresses an episode that premiered on May 8, where one character, a man played by Ahsan Khan, preys on two children (the character's orphan niece and stepdaughter).

According to Sahil, a human rights group that focuses on child abuse, a total of 3,768 cases of child abuse were reported in Pakistan in 2015. Based on official records, Sahil estimates that roughly ten children were abused every day in Pakistan in 2015. (The number of actual abuses is likely much higher, given that many, if not most, instances of abuse are never reported.)

‘Silencing the Ugly Side?’

PEMRA has faced criticism for its crackdown on “Udaari,” which enjoys significant popularity in Pakistan, and a reputation for taking on real social issues.

Twitter user Shahwar A. Khan, for instance, argued that there's nothing immoral about portraying sexual abuse against children:

Udaari isn't immoral. Immoral is our society where we silence someone who makes us see our ugly side. #IsupportUdaari

Saadia Khan, a human rights advocate, wrote on Twitter that she thinks PEMRA should turn its attention to more pressing issues:

Before long, a supportive hashtag began making the rounds on Twitter, as well:

#ISupportUdaari , one of the bravest shows I am enjoying right now, I hope #PEMRA notice is not going to stop the show #HUMTV

Actress Urwa Hocane, who plays a role on “Udaari,” was not inclined to share regulators’ view that the show is “immoral”:

The scathing criticism received by PEMRA has also built a strong following for the series, which continues to air.

Entrepreneur Shakir Husain seemed to think PEMRA's interest in birth control was too little and too late:

7.4 bn people on the planet. let that sink in. and PEMRA doesn't want contraceptives on TV. https://t.co/mnc62lV1la

Birth control is Treason according to Erdogan. Pemra got inspiration from him to ban Contraceptives? https://t.co/tkcKioeRCO

Nazima Najee tried her hand at predicting the future:

Future of Pakistan in the light of Pemra recommendations. pic.twitter.com/YSA0vCbkCf

Before long, PEMRA backed down slightly from its blanket prohibition on advertisements for contraceptives, making it permissible to air such commercials after 11 p.m. This concession has done little, however, to mollify the large segment of the public that resents the crackdown on television, viewing it as an effort to silence and shame those who want to discuss issues like child abuse.