Mexico, on the Mountaintop, or in the Abyss? 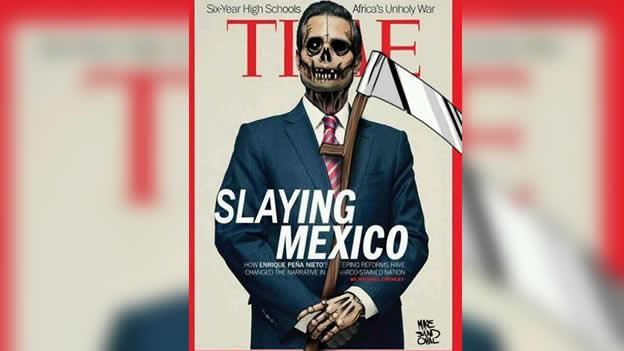 At the end of 2012, Enrique Peña Neto became president of Mexico, nominated by the Institutional Revolutionary Party (PRI) after 12 years of governance by the opposition right-wing National Action Party (PAN). Peña’s assumption of the presidential seat was praised by international public opinion: The Economist published an article entitled Mexico's Moment that continued to be referenced for months, and in January 2014 The Guardian asked whether Mexico’s moment had finally arrived.

Peña’s cabinet has been dedicated to releasing statistics indicating lower crime rates and economic stability. The president’s wife appears in glamor magazines showcasing the lifestyle to which many Mexicans aspire, meaning one of luxury and comfort, untouched by austerity, poverty, and violence. Public money is spent on advertising spots that praise the regime and other frivolities, as Twitter user Epigmenio Ibarra noted:

The reality, however, is far from the image of a prospering country that the government is striving to project.

From illusion to reality

Several regions throughout the country are suffering the consequences of a non-international armed conflict that is denied officially, with tens of thousands of people gone missing and many others displaced from their communities. A recent example: the many who suffered collateral damage as a result of military operations during the search for the leader of one of the contested armed groups in the northern state of Sinaloa.

In September 2014, the forced disappearance of a group of 43 teachers’ college students in the western region of Guerrero warned of a resurgence of violence in an area marked by poverty and inequality. In the “Ayotzinapa case”, as this unfortunate event has come to be called, while over 100 people have been charged and are in custody, some for over a year, no specific conviction has yet been made. So the perception is that “the vulture of impunity” is flying free, preparing to continue its feast. Statistics indicate that more than 90% of reported crimes in Mexico go unpunished, which denotes a collapse in the justice system. 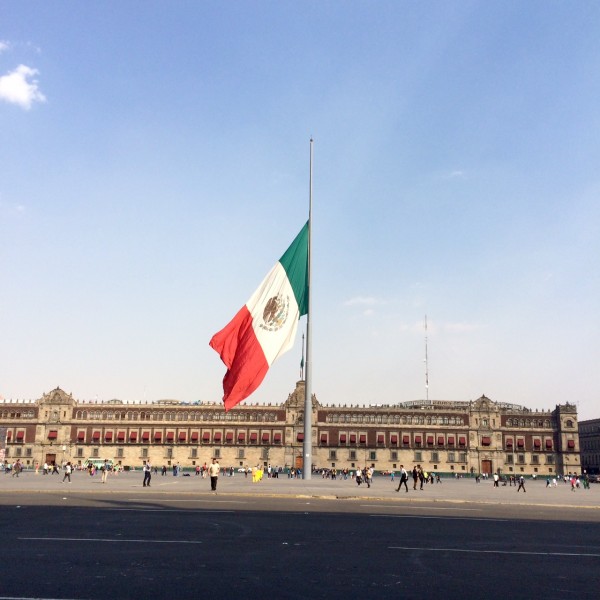 Mexico. National flag hoisted at half-mast in mourning. Photo taken by the author.

The eastern region of Veracruz is also wracked by violence and government ineptitude. Notable is the threat to freedom of expression embodied in the murder of journalists which we have reported on at Global Voices time and time again. During the current administration, 16 journalists have had their lives taken away in violent acts; many of them were recognized for their work criticizing PRI Governor Javier Duarte.

A journalistic investigation undertaken recently by Animal Político revealed the way in which Duarte’s government makes millions in public resources “disappear” by using “ghost companies”, even though local bodies responsible for audits argue that no irregularities have been found.

It is worth mentioning that the inefficiency of institutions is not exclusive to local government. The federation has shown that its structures are also riddled with corruption, and as proof of this is the escape, on not one but two occasions, of Joaquín “El Chapo” Guzmán, considered at one point the world’s most wanted criminal. Given the inability of “maximum security” prisons to detain the drug lord, and the justice system’s unfitness to try him for the litany of crimes with which he is charged, “El Chapo” will be extradited to the United States in the coming weeks, according to reports. If the extradition takes place, “El Chapo” will answer for his actions before the American people, and not Mexican citizens.

Against the background of government corruption and decay, stories of clashes between armed groups, extrajudicial executions, forced disappearances, and discoveries of clandestine graves have made the language of war omnipresent in the Spanish that Mexicans speak, reflecting the grim reality of their lives. As I pointed out in a piece written in collaboration with semiotics professor Gabriel Páramo:

It’s not about looking for conspiracies, but rather analyzing reality. We are in a state of war and war has its rules, but above all, its lexicon. Terms to provoke fear, confusion, and primarily, submission.

Reality is built on language. This fact is well-studied and explained by linguistics, semiotics, the theory of communication, and psychoanalysis. From Slavoj Žižek to Chomsky, passing by Lacan, from Kerckhove or Econ, they all say: we are what we speak.

The language of war in Mexico. Photo taken by the author.

In the economic sphere as well, international perceptions aren't good. Petróleos Mexicanos (PEMEX), the former “crown jewel” or “goose that lays golden eggs”, the most profitable state company in the country, is reportedly on the verge of bankruptcy because of the global drop in oil prices and other factors. The “energy reform” that the PRI government boasted of having achieved has not attracted the multimillion-dollar investments that were expected, nor has it resulted in savings for citizens, who continue to pay high prices for energy and gas in particular.

In the fashion of old PRI governments, Mexico's currency has been devalued considerably against the U.S. dollar, reducing the purchasing power of the Mexican middle class. The lower class, including those who earn the minimum wage, are paid an insulting 73.04 pesos for a day’s work (equivalent to $3.80* or €3.50)—yes, for an entire day’s work!

In light of these factors, we consider that there is sufficient proof, from a variety of angles, to demonstrate the difference between what the Mexican government projects and the reality lived by Mexican citizens.

This is about a non-international armed conflict with obvious economic consequences, and about the humanitarian crises in several regions that go unnoticed by international organizations due to the misrepresentation of facts and figures by the ravenous political parties that persist, feeding from the bottomless trough of corruption from which its members all benefit.

So when will Mexico’s true moment arrive? We do not know, but we will be there, attentive to the facts and ready to communicate them to the world from the perspective of the average citizen.