Tons of Fish Are Dying Mysteriously in Vietnam. Whales, Too. 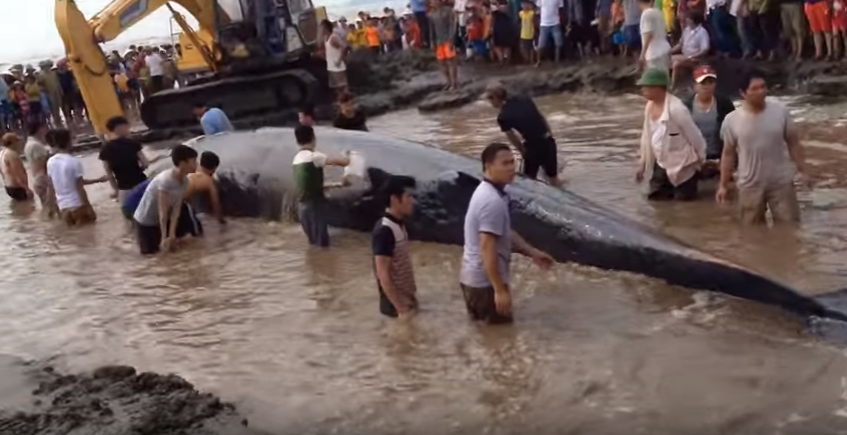 Residents try to rescue a stranded whale at the Diễn Thịnh shore in Vietnam. Image: YouTube

This article by Nguyễn Linh Chi is from Loa, an independent news website and podcast that broadcasts stories about Vietnam. It is republished by Global Voices as part of a content-sharing agreement.

For the past two months, tons of fish have washed up dead on the shores of central Vietnam. In the past five months, locals in the Nghệ An province have also discovered at least seven dead whales, according to the news website Lao Động. The timing coincides with the recent mass deaths of smaller marine life.

On May 25, while authorities in the Quảng Bình province promoted the consumption of seafood and water activities, a 17-ton whale was found beached on Diễn Thịnh’s shore.

Amatuer footage uploaded to YouTube shows the authorities’ efforts to rescue the animal, but it died shortly after being returned to the water.

Two days later, another 10-ton whale—this one already dead and decomposing—washed up onto the same shore. As soon as the tide started to rise, the authorities pushed the carcass back into the sea.

Thái Văn Dung, an activist based in Nghệ An, has doubts about the authorities’ motives, however, saying:

I agree that it makes sense to wait for the tide to rise to discard the carcass, but why did they do it in such a hurry in the dark? Why didn’t they wait to examine the cause of death?

Dung is one of many activists who believes there is a direct link between the dead whales and wastewater emissions from the Taiwanese steel plant Formosa in neighboring Hà Tĩnh province. The government, however, has yet to conclude its investigation into the fish deaths. The ongoing environmental crisis continues to hurt local fishermen, and has also triggered large-scale protests nationwide and in the Vietnamese diaspora.

Vietnamese fishermen have long considered whales to be holy creatures. While Hanoi has refused to comment on the mysterious deaths, locals say the discovery of new carcassses casts another spotlight on the authorities’ negligence.

Click below to listen to Loa's podcast episode about the dead-whale issue and other major news stories about Vietnam from the past month: