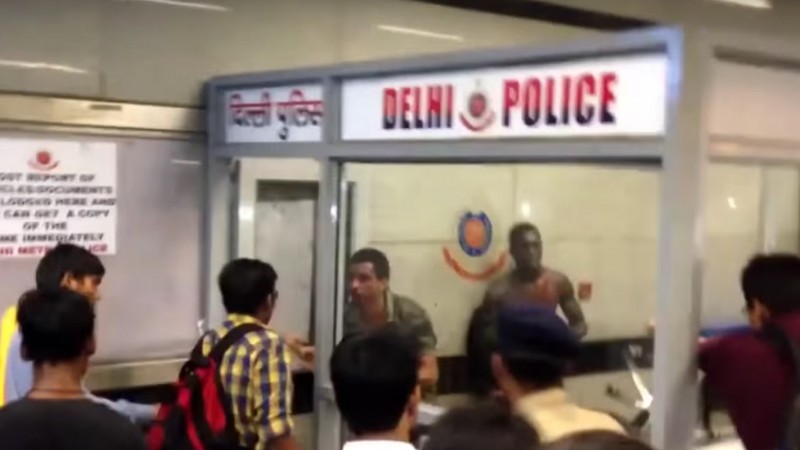 A lynch mob mercilessly beat three Nigerian students in Delhi in September 2014. Screenshot from video “No Country For Black Men”

A few weeks ago, Masonga Kitanda Olivier, a 23-year-old from the Democratic Republic of Congo, was beaten to death by three men in South Delhi’s Vasant Kunj area. Olivier had moved to India for university studies and had recently started teaching French in a private institute. His attackers allegedly used racial slurs as they assaulted him.

It was far from being the only recent case of violence against African people in India. On May 25, a Nigerian student, 26-year-old Bamilola Kazim, was hit with an iron rod after an altercation over a parking issue with a local in the city of Hyderabad. He was treated at a local hospital and released.

And in January, a 21-year-old Tanzanian woman studying in India was beaten, stripped and paraded naked in the streets of the city of Bangalore by a mob because they incorrectly thought her car had run over and killed a local woman. Three of her friends were also assaulted and the car they were traveling in was set on fire. After they were done, the enraged horde went to houses where African students live and harassed them.

Throughout the last years, similar attacks targeting African nationals and people of African descent have continually made headlines. So does that mean India has a problem with racism against Africans?

Not if you ask India's Minister of External Affairs Sushma Swaraj, who was reluctant to categorize the Masonga Kitanda Olivier's killing as racist. Swaraj assured that the assault was carried out by anti-social elements and argued that giving the case a racial tinge would be unfair to the people of India, who generally believe in harmonious cohabitation.

I would like to assure African students in India that this an unfortunate and painful incident involving local goons.

Swaraj took to Twitter to urge Indians to tell Africans that India loves them and shake their hand. However, many found it naive or hypocritical, in the face of recent violence against Africans as well as the discrimination that persists in other sectors of Indian society.

Even after 70 years of Independence, we can't even make the Indians love each other, and they want us to tell Africans that we love them.

@SushmaSwaraj Maybe we shd work on better awareness and not superficial steps. Besides, rights shd not depend on love. #AfricaIsNotACountry

@SushmaSwaraj Better still. Urge fellow Indians to not be racist and xenophobic. Let's truly change who we are. @apercevoir

Say “India loves you,” then, to Muslims, Dalits, Africans, seculars…and go right back to kicking them in the face? https://t.co/sGXaArGadM

However, a minority of Twitter users seemed to think this was a good idea.

To all fellow Africans,
India loves you.

Africans and their governments haven't stayed quiet the recent attacks. Al Jazeera reported that a group of African ambassadors have come together to speak for their citizens in India, whom they believe are having to live in a “pervading climate of fear and insecurity” after the spate of attacks on African individuals. They have warned that if the attacks continue and perpetrators are allowed to escape scot- free, they would urge their respective governments to keep them from sending students to India.

It isn't the first time the issue has troubled African diplomats, either. In 2015, before the third edition of the India-Africa Forum Summit, African ambassadors in Delhi reportedly considered boycotting the Africa Day celebration, hosted annually by the Indian Council for Cultural Relations in Delhi, over the xenophobia their citizens experience in India.

Some Africans have recounted their experiences with racism to various media outlets. In a June 4 article for Scroll.in, a South African student of South Asian origin talked about subtle forms of racial and cultural stereotypes that exist in India:

It was also not uncommon for many students to have conversations with me, which they assumed were progressive, about Africa and Africans that were based on crude colonial stereotypes of Africans as being close to nature, having a good sense of rhythm or even, and possibly the most colonial, having big penises. While many of the students at JNU had an impressively extensive knowledge of their own colonial, independence and post-independence cultural, political, social and religious, and regional histories, as well as knowledge of western theory and philosophy, and were committed to an idea of Left politics that took ideas like South-South solidarity seriously, their knowledge of African social, political and cultural histories as well as present realities was limited.

There have been protests too. For example, after the killing of Obodo Uzoma Simeon, a 36-year-old Nigerian citizen, outside an African restaurant in Parra in the state of Goa in 2013, more than 50 Nigerians blocked the highway. They stopped the hearse carrying Simeon and dragged his body on the road as a way to draw attention to the case and prevent a cover-up of the murder.

Authorities, however, answered their protest by cracking down on undocumented Nigerians, a campaign that seemed to only make anti-African sentiment worse. The negativity continued after Masonga Kitanda Olivier's murder. In response to an alleged rape case involving a Nigerian national, Goa's tourism minister publicly accused Nigerians of committing crime on purpose to prolong their stays in India. “We should have a strict law where we can deport them. But unfortunately there is no such law in India at the moment,” he said.

There is little doubt that the series of attacks on African individuals have disgraced India in front of the international community and has strained its ties with African countries. In an effort to reverse the dismal situation, Sushma Swaraj has sought to provide assurances to African ambassadors and individuals in India alike. A group of African students called off a demonstration in the national capital as a result.

Hopefully, the country will soon be on the path to peace and security for Africans as well as for all marginalized communities in India.