For Many Puerto Ricans, a Proposed Fiscal Control Board Smacks of US Colonialism 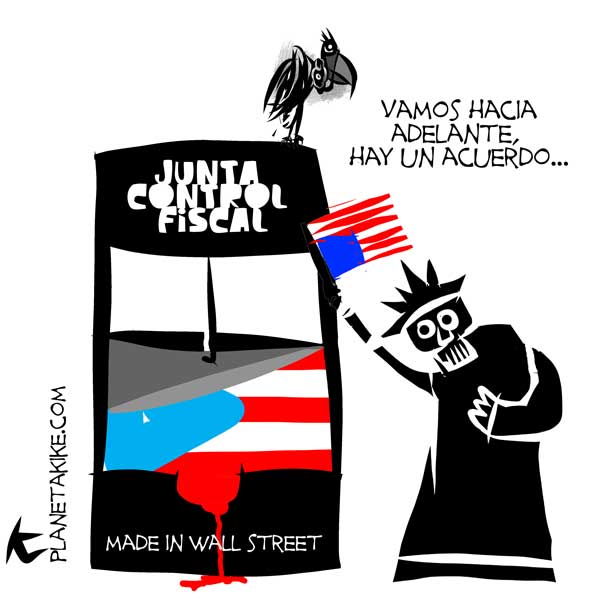 “Let's go ahead, there is an agreement.” Illustration by Kike Estrada. Used with permission.

There are many reasons why the summer of 2016 will prove to be pivotal for the future of Puerto Rico, a territory under the control of the United States. The Puerto Rican government is expected to default on almost $2 billion in general obligation bonds. The US Supreme Court will decide two cases that could touch upon the very heart of the colonial status problem of Puerto Rico. The US Congress will vote on the proposed Puerto Rico Oversight, Management, and Economic Stability Act (PROMESA, which in Spanish means promise).

That last one now seems dangerously close to becoming a reality.

On May 25, the House of Representatives Committee on Natural Resources, which has authority over the affairs of Puerto Rico, approved HR 5278, a bill which proposes an independent fiscal control board with the power to restructure Puerto Rico's debts. Should this board be created, its powers would override those of the entire government of Puerto Rico, including its Constitution. It would have absolute control over the government's budget, revenues and operation, and no one in Puerto Rico would have a say in the matter.

This version of the bill doesn't differ much from its predecessor, HR 4900. Indeed, most of the changes seem to be rather superficial. One of the most important points of contention between the Democratic and Republican political parties, which is lowering the minimum wage from $7.25 to $4.25 for workers 25 and under, has been left intact, for example. If anything, the new bill creates an even more powerful fiscal oversight board than was originally proposed.

While fiscal oversight boards are nothing new for the US (the capital Washington, DC, was subject to one from 1995 to 2001), the proposed board for Puerto Rico is much tougher than any previously created. Interviewed on independent US news channel Democracy Now!, journalist Juan González explained in general terms what the bill would mean to Puerto Rico should it be passed into law:

[The] bill does have a restructuring mechanism in it for Puerto Rico, but it’s now really a poison pill, because in addition to providing the restructuring that the government of Puerto Rico has asked for, it’s also requiring the government of Puerto Rico to submit to a virtual total takeover of its economy. It would require a new oversight board of seven people, four of whom will be chosen basically by the Republicans; even though they will be appointed by the president, the president has to take them from lists provided by [House of Representatives] Speaker [Paul] Ryan and by the Senate majority leader. So it’s basically going to be a Republican-dominated board.

And most importantly—this is what rankles most people on the island—is that only one of the seven actually has to be a resident or have a primary business in Puerto Rico. So you’re in essence creating a board […] that will be of nonresidents of the island running the financial affairs of Puerto Rico for the next five, possibly 10 years.

That means Puerto Rico's already limited autonomy would be restricted even further. As a US territory, Puerto Ricans have US citizenship, but aren't allowed to vote in federal elections for the country's president. Puerto Ricans also lack voting representation in the US Congress — where laws that very much affect them, like the PROMESA bill, are decided.

Republican Representative Paul Ryan, who is the speaker or presiding officer of the House of Representatives, which is the lower chamber of the US Congress, defended the bill on Twitter:

Here's my statement on #PROMESA, the House's bipartisan #PuertoRico legislation that prevents a taxpayer bailout. pic.twitter.com/lY0YuW5cIs

Meanwhile, for politicians gearing up for the November elections in Puerto Rico, it's business as usual. Though they are aware of the extraordinary powers that the fiscal control board will have should it become law, one could think otherwise, judging from their campaigns. A tweet from journalist Maritza Díaz Alcaide summed this up quite well:

It is surreal to see people campaigning who are not going to govern.

Mainstream media in Puerto Rico has joined the ranks of those who are urging its people to welcome the fiscal control board as necessary and inevitable. One of Puerto Rico's most influential newspapers, El Nuevo Día, has published a series of editorials during the past months that argue in favor of federal fiscal control. A recent editorial reads as follows:

Without belittling the concerns regarding the authority the law grants the Board, the thing to do right now is for the Senators and members of Congress who are friends of the island to close ranks with the federal House leadership, Republicans and Democrats alike, which removed the restructuring legislation from the dangerous deadlock in which it previously found itself.

The legislation should not be blocked in the House or Senate. That must not happen in this final stretch. We trust that, after the House vote, the Senate will establish a swift work plan so the legislation can return to its counterpart and be completed in a final version before the critical date of July 1st, when Puerto Rico anticipates a default of about $2 billion.

In times of crisis, reason must prevail over emotions. Local and congressional leaders should make note of that.

‘Too high a cost in exchange for an uncertain benefit’

But in alternative media and especially on social media, the narrative is quite different. Many groups have formed on Facebook with the purpose of organizing efforts to protest the proposed oversight board, with civil disobedience if necessary.

Junte contra la Junta (Come Together Against the Board) describes itself as a tool for the “agitation” of the masses against the oversight board. Another Facebook group is Coalición Ciudadana contra la Junta de Control Fiscal (Citizen Coalition Against the Fiscal Control Board) which states as one of its principal purposes to educate the public about the consequences of the control board and to help rally different sectors against it.

In an opinion piece published in Diálogo, a monthly newspaper published by the University of Puerto Rico, José G. Caraballo explains why a large number of people reject the PROMESA bill:

What isn't good for the United States is not good for Puerto Rico. That is why the PROMESA bill is rejected by many sectors, given its impact on private and public workers, poverty and our century-long colonialism. In a recent survey a majority of Puerto Rican economists (of different ideologies) reject a federal fiscal control board. The immense majority of civil society also rejects it, including over 42 organizations that testified before the Inter-American Commission on Human Rights. In a summit of the Puerto Rican diaspora last month I also observed a majority that opposed the control board.

He also adds that in spite of this opposition, there are still many who want Congress to impose a fiscal control board out of ignorance:

A number of people in Puerto Rico favor this control board without knowing what it is, without having read the bill (70% of the people don't speak English) and think that this control board will put a stop to corruption (a word that is absent from the bill). Those same persons change their minds when they know that the members of that board can accept “donations”, but have criminal immunity (opening the door to corruption), that that bill reduces the minimum wage for young people and eliminates overtime pay for all private employees that make over $455 a week. All of this without mentioning that the “representative” of Puerto Rico before the board could [in theory] be Donald Trump or [billionaire hedge fund manager] John Paulson, who both have businesses here, or that the bill was secretly made between the Department of the Treasury (Wall Street ex-CEOs) and conservative congressmen, without consulting the local civil society.

The Center for a New Economy, an independent non-partisan think tank, has also come out against the PROMESA bill:

Unfortunately, after analyzing HR 5278—and even though we recognize that a lot of work has been done to create a bill with bipartisan support—we have to say that we cannot endorse this bill.

First, this bill imposes on Puerto Rico too high a cost in exchange for an uncertain benefit. It forces us to trade our own self-governance in return for access to a process that—after meeting over 45 different requirements, steps and levels—may or may not allow us the possibility of a court deciding to permit us to restructure part or all our our debt.

Second, though it is true that Puerto Rico needs strong fiscal controls, those controls should come from local institutions and a transformed fiscal culture. It is of no use to have a strong fiscal control board imposed on us that balances the checkbook, but once it finishes its mandate, leaves us with the same government and fiscal institutions that have gotten us in this mess. Puerto Rico needs lasting and long-term transformations.

The PROMESA bill has all the earmarks of plain, old-fashioned colonialism, which for many only confirms that Puerto Rico is under the colonial rule of the US. Tellingly, mainstream media in the US stop just short of referring to that relationship as colonial. If the term colonial is used at all, it is accompanied by some sort of modifier (quasi-colonial, pseudo-colonial, colonial-like, etc.). The most recent example of this occurred during presidential hopeful Bernie Sander's visit to Puerto Rico on May 16, in which he told crowds that “The people of the US cannot continue a colonial-type relationship with the people of Puerto Rico”.

Perhaps the first step towards real help for Puerto Rico is for the US to recognize that it is, indeed, in a colonial relationship with Puerto Rico, a fact that has remained unchanged for the past 118 years.