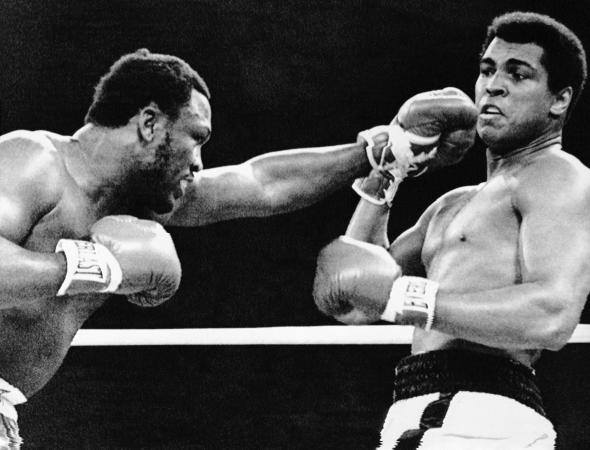 Muhammad Ali (right) against Joe Frazier (left) during the ‘Thrilla in Manila’ boxing fight. Photo from The Kahimyang Project by Primo Esteria, shared on the official Facebook page of the Philippine presidential palace.

News about the death of Muhammad Ali inspired many across the world to pay tribute to the boxing icon. In the Philippines, Filipino sports fans shared their memories of the ‘Thrilla in Manila’ boxing match between Ali and Joe Frazier.

Held on October 1, 1975, the fight became one of the greatest boxing fights in history, which featured the third and final encounter of two legendary heavyweight champions. Ali won, although he almost quit near the end of the fight. Ali’s team felt their player barely survived the fight and they blamed it on the referee. This was recalled by Carlos Padilla, the Filipino referee who officiated the game:

When I went to Ali’s corner to raise his hand, they weren’t really happy with me and the way I officiated. They surrounded Ali and basically didn’t allow me to go to him and declare him the winner. They figured I made Ali’s life difficult that day. They were none too pleased, but I said, ‘No, no, no, give way.’ They just circled around him. I told Ali, ‘I have to raise your hand.’

The Philippine government hosted and sponsored the boxing match because of the publicity it would generate for the country. Ronnie Nathanielsz, the government-appointed liaison officer of ‘Thrilla in Manila’, wrote that then President Ferdinand Marcos wanted the international event to demonstrate that the country was peaceful and prosperous despite the declaration of martial law:

…he wanted the “Thrilla in Manila” so he could ‘show the world that the country was peaceful, we have no peace and order problems, the economy is doing well and our people are content.

I remember the fight itself before a jam-packed Araneta Coliseum which was re-named the Philippine Coliseum on instructions of President Marcos who wanted the country's name to gain international recognition.

Indeed, ‘Thrilla in Manila’ succeeded in redirecting public attention from the alleged excesses committed by the military-backed government toward the boxing game.

Facebook user Manny Payumo wrote how the ‘Thrilla in Manila’ led to fewer anti-government protests a week before the event:

I was at the college of engineering during the Thrilla in Manila fight at Araneta Coliseum. The week into the fight was the only time we were not out in the street protesting against the martial law regime of Marcos.

In honor of Ali, a shopping mall was named after him. Ali Mall, the Philippines’ first shopping mall, was built near the venue of ‘Thrilla in Manila’ in 1976.

Thrilla in Manila happened when I was a college sophomore October 1975. Then Ali Mall was named shortly after https://t.co/00h41ZvGtF

Ali Mall, Philippines- the mall named after the great Muhammad Ali in tribute right after The Thrilla In Manila. pic.twitter.com/JQ0xE4Sr2m

Manny Pacquiao releases a statement on the passing of Muhammad Ali. pic.twitter.com/hRa2kM3CLr