India Moves Against Illegal Immigration from Bangladesh, Plans to Seal Border in Assam 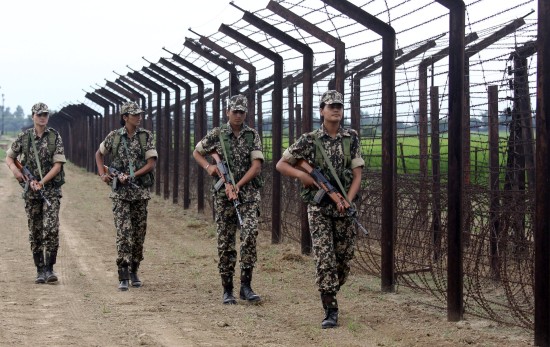 India says it wants to seal the border with Bangladesh in the northeastern state of Assam. India's government, led by the Bhartiya Janta Party (BJP), has given the military until June 2017 to finish. The BJP says these measures are a necessary defense against illegal immigration from Bangladesh.

Sarbananda Sonowal—Assam's new chief minister, and a high-ranking official within the BJP—has asked the Border Security Force (BSF) to proceed with urgency on the matter of sealing the border. BJP's unprecedented electoral success in Assam was due in large part to promises made during the campaign that a BJP-led government would be tougher on immigration. Responding to Sonowal’s request, Union Home Minister Rajnath Singh announced that security forces aim to seal the border with Bangladesh in Assam by June 2017, within one year.

The total length of the Indo-Bangladesh border is of 4,096 kilometers (2,545 miles), about 7 percent of which is located in Assam. According to the Ministry of Home Affairs, a 224-kilometer (140-mile) fence has already been constructed along the border, but there are still 122 locations across a a 61-kilometer (38-mile) stretch that lack any physical barriers, making the area easy for immigrants to cross. According to the government's new plans, at least 100 of these locations will get fences, and the BSF will install various barriers at the remaining sites.

According to press reports, Sonowal has promised extra assistance to the BSF to make the mammoth task feasible. (A 42-kilometer, 26-mile stretch in the Dhubri sector is expected to be particularly challenging for construction crews.)

@siddharth3 India Bangladesh share nearly 54 rivers, how can one seal entire border with such high degree of porosity?

The Assamese backlash against Bangladeshi refugees and migrants took off in 1979, when the electoral rolls showed a disproportionate rise in registered voters. The concern from the local populace, which was concentrating on tribal autonomy at the time, was that the large influx of Bengali Muslims would change the outcome of the election and divert from the state’s political demands.

Assam’s crucial role in the renewed hostilities by virtue of the geography of the Brahmaputra River, and the Bangladeshi government’s failure to cultivate regional kinship and encourage mutually beneficial development in the neighbourhood, make Sonowal’s promise into a deeper predicament for Bangladesh.

Twitter user Kanchan Gupta questioned the motives behind the decision:

Good fences make good neighbours. But a fence is good only if you wish it to be so. Fact is, India's eastern border management is shameful.

Shahanaz Parbin Ritu, on the other hand, welcomed the decision and wrote in Facebook:

If the India – Bangladesh border is sealed then the Bengali speaking Muslims in India will not be required to prove their identity over and over again.

The porous border with Bangladesh has long been one of India's national security concerns, and India's government has taken various steps throughout the years to put up obstacles to illegal immigration, including barbed wire and floodlights at observation posts. Controversially, the BSF has also maintained a “shoot-on-sight” policy at the border. The new plan to fortifying the border appears to signal the government's new, more serious approach to curbing illegal immigration into Assam.