Threats of Criminal Charges Do Not Deter Macedonia's ‘Colorful Revolutionaries’ 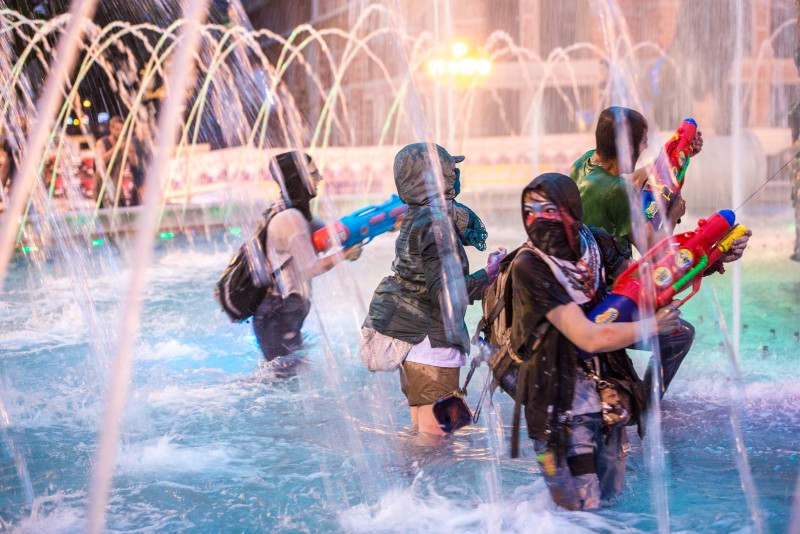 Protesters of the ‘Colorful Revolution’ in Macedonia claim they won't be intimidated by the police announcement that they would press criminal charges against the bravest among them. The anti-corruption protests, while non-violent, are far from passive, and include marches, performances, and throwing paint at objects that symbolize the impunity and poor governance of the regime. According to experts, the charges are illegal from several points of view.

Under Macedonian law, such ‘painting’ is considered a misdemeanor, with a fine of 50 euros (58 US dollars) should a uniformed policeman or sanitary inspector catch the perpetrator in the act. Contrary to the law, the police have been calling in people suspected of painting for questioning. The protesters consider this a form of intimidation which, in fact, fueled their anger and increased their numbers.

While the ‘Colorful Revolution’ protests take place in over 20 cities across Macedonia, they have been most frequent and intensive in the capital, Skopje and second biggest city, Bitola. On Friday, June 3, the police increased the pressure by announcing their intent to press criminal charges against seven protesters in Skopje, and against 26 protesters in Bitola. This gives the situation a much higher level of gravity — if the public prosecutors approve investigations under such charges, they may involve arrests, detention and possible prison sentences.

The pretext for these charges is “participation in a mob about to perform a criminal act”, the act being “damaging cultural heritage objects.” The objects in question are the Ministry of Culture building and the Triumphal Arc in Skopje, and “property damage” in Bitola.

The Violent Crimes Unit of Skopje of the Internal Affairs Sector in Skopje submitted criminal charges to the Basic Public Prosecutor against seven persons suspected of participation in a crowd about to commit a criminal act. Criminal charges are pressed against the persons P.B., M.Z. I.M., S.S.K, A.G., and N.P from Skopje, as well as A.K. from Ohrid.

In response to the announcement, the protesters in Skopje continued with the everyday activities of gathering at 6 pm in front of the office of the Special Public Prosecutor, marching and painting, and using a human-powered slingshot to reach distant objects, such as the seat of the government. The banner of the day read: “The Guilty Party is Pressing Charges,” referring to the impunity of some of Macedonia's rulers who are suspected of committing grave crimes.

Protesters also created a ‘face in the hole’ cardboard cutout where any supporter of the protests can get their photo taken in the role of ‘slingshot bombardier’.

As the police announcement listed the seven “chosen ones” by their initials, protesters painted their own initials on their t-shirts before starting the march, as a sign of defiance. 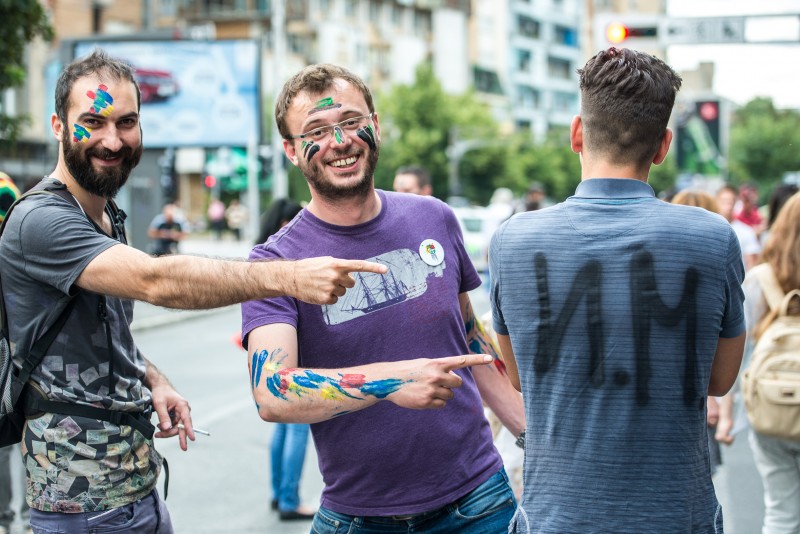 The protesters then proceeded with the usual march, visiting the seat of the government and using the slingshots to throw more paint on its recently refurbished facade.

The Colorful Revolution paints the government building this evening, also.

After that, the protest went to the main square in Skopje, were participants proceeded to paint one of the biggest symbols of Nikola Gruevski's regime — the statue of Alexander the Great, officially named ‘Equestrian Warrior’. Due to its hefty cost of 8.2 million euros (around 9.3 million US dollars), it is also regarded as a symbol of corruption and government excess. For the first time, the protesters actually entered the fountain to offer an up-close dose of painting, using toy water guns.

Protesters enter the fountain of the monument Equestrian Warrior.

The protest ended in euphoria, as the most active painting protesters also lit flares. The last stop was the Parliament building, which also got a dose of color. 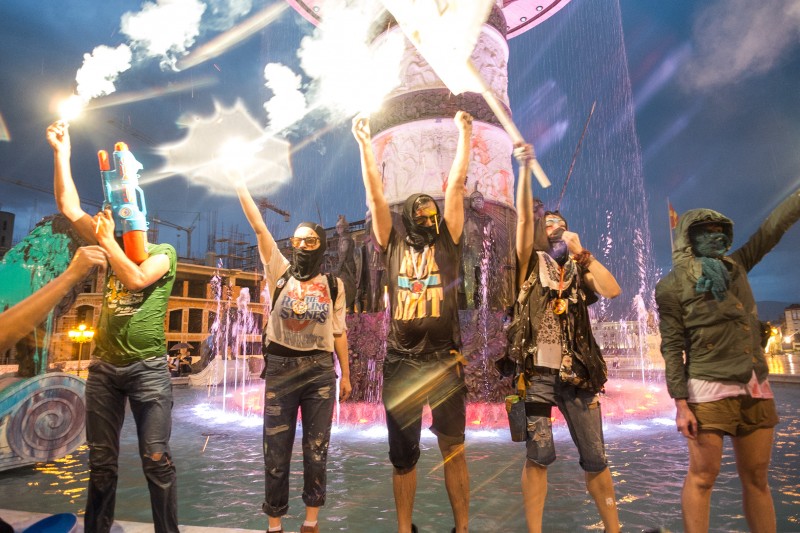 Legal and other experts have questioned the conduct of the police on two grounds. According to the Article 97 of Macedonia's constitution, “The bodies of state administration in the fields of defence and the police are to be headed by civilians who have been civilians for at least three years before their election to these offices.” The current Minister of Interior Mitko Čavkov has, until recently, served as a high-ranking police official. According to human rights expert Professor Mirjana Najčevska, PhD, this makes his entire appointment — and any of his commands — illegal and unconstitutional.

Moreover, according to cultural policy expert Professor Donka Bardžieva, PhD, the citizens could not know that the painted objects have been declared as items of cultural heritage, because they had not been properly marked. According to Article 45 of the Law on Protection of Cultural Heritage, the Ministry of Culture was obliged by law to properly mark them within 60 days of giving them such status. In addition, according to Article 174 of that law, the minister and her underlings are obliged to pay a fine of 810 to 240 euros (920 to 2761 US dollars) for non-compliance.

Meanwhile, the protests continue across Macedonia. On social networks, on the ground information is shared via the hashtags #ColorfulRevolution and #Macedonia in English, #ШаренаРеволуција and #протестирам in Macedonian, and #RevolucioniLaraman and #protestoj in Albanian.