Drug Trafficking, Politics and Journalism: Who Serves Whom in the Peruvian Electoral Campaign? 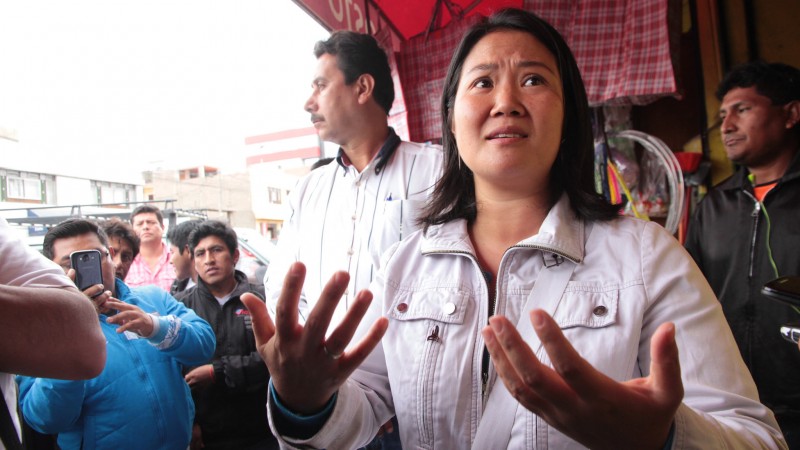 Questions about possible connections between Keiko Fujimori's political party and drug trafficking raise doubts about her ability to fight corruption if elected as head of the Peruvian state. Photo by Néstor Soto Maldonado used under Creative Commons license (CC BY-NC 2.0).

Disputes and scandals have tarnished the presidential elections in Peru. Most recently, accusations have surfaced of connections between drug trafficking and Congressman Joaquín Ramírez, Secretary General of Fuerza Popular, the political party under which Keiko Fujimori is running for president. On Sunday May 15, 2016, Peruvian news program Cuarto Poder broadcast a report conducted with Univisión that revealed Ramírez is being investigated by the DEA. The Congressman is being investigated for money laundering, a crime for which he is also under investigation in Peru.

In addition to those revelations, two days later newspaper La Republica and independent media Ojo Público revealed that an investigation called Operation Untouchables: The Arevalo Drug Trafficking Organization conducted by the DEA and Dirandro (Drug Enforcement Administration of the Peruvian National Police) has been ongoing since 2011. The investigation follows Miguel Arévalo Ramírez, aka ‘Eteco’, a Peruvian drug kingpin, and also involves Joaquín Ramírez.

The Congressman made certain declarations that implicate Keiko Fujimori. The presidential candidate quickly denied the allegations and accused her opponent, Pedro Pablo Kuczynski, of conducting a “dirty war strategy”, but gave no further statements. At the same time, the DEA declined to comment on the investigation but issued a statement which clarified that Keiko Fujimori “is not being investigated nor was she previously.”

Nevertheless, netizens on Facebook took to social media to make their own public speculations, since indications of a relationship between the Fujimori name and drug trafficking have a long standing history. Anthropologist Sandra Rodríguez, for example, asked that Joaquín Ramírez's parliamentary immunity be removed and recalled some past incidents:

Fidel Ramírez, Joaquín Ramirez's uncle, was a close associate of Montesinos [who was an advisor to former president Alberto Fujimori, father of the current presidential candidate]. Now his nephew, Joaquín Ramirez, is the Secretary General of the Fuerza Popular. And today, with the scandal of Joaquín laundering Keiko's 15 million, we know why. Not just because money laundering is the backbone of this political party. But also because the link between drug trafficking and politics, the same which existed between the Montesinos-Fujimori duo in the 90s, was never severed. It's only been reorganized with the children and nephews of the old mobsters.

Álvaro Campana gave an account of all the circumstances in which Keiko Fujimori came in contact with money of unknown origin. Here are a few examples:

1. In 2011, Keiko Fujimori received US $10,000 from an accused drug trafficker named Eudocio Martínez, better known as Oyuquito. What are the connections between Keiko Fujimori and the illegal drug trade?

2. Keiko Fujimori held a raffle that raised a million and a half soles and only invested 39,000 soles [11697 USD]. No one claimed the prize, a raffled truck. Hiding campaign funds?

The media and journalism enter into combat

That same Monday, host Chema Salcedo from local media house RPP interviewed Gerardo Reyes from Univisión, the journalist who led the investigation regarding the money laundering accusations. Salcedo asked him for proof; Reyes replied that the word of the DEA representatives was sufficient. Salcedo downplayed the validity of this response and questioned Reyes's competence, despite his numerous awards (including a Pulitzer Prize). Reyes, meanwhile, reported the details of the investigation to other media outlets.

The reactions were swift. The website Clases de Periodismo called the interview a strange lesson in journalism:

There are occasions when we believe journalists are all-knowing. Occasions when we believe judges and they are implacable. In this case, the host of Radio Programas del Perú (RPP), Chema Salcedo, took on another role: in many moments he appeared more like Keiko Fujimori's attorney rather than a journalist interested in the investigation conducted by Univisión and Cuarto Poder.

The writer Gustavo Faverón opined that in the face of the report that reveals “the umpteenth connection between drug trafficking, money laundering and Keiko Fujimori's candidacy”, that pro-Fujimori journalists attack, according to them, the lack of rigor of the report.

But beyond that, Beto Ortiz, Chema Salcedo and other compliant journalists should think twice before practicing journalism as a cover for criminals. Is it not enough that they never question anything and never investigate the obscurities of the most corrupt politicians in the country? Now they are going to rush to silence or discredit information that real journalists discover?

Congressman Ramírez denied that he is under investigation by the DEA and announced he will take legal action against the journalists who spread the news. He also linked the complaint with the campaign which, according to Ramírez, is harming Keiko Fujimori on purpose. However, he failed to show documents proving the origin of his various properties and assets which are under investigation.

Despite his proclaimed innocence, on May 18, Ramírez stepped aside and resigned from his position as Secretary General of Keiko Fujimori's party.

But that's not all the candidate is dealing with; on May 20, it was revealed that both Fujimori and her husband are being investigated for money laundering.

In the midst of all these complaints, the first debate between Fujimori and Pedro Pablo Kuczynski on May 22 was full of attacks from both sides. While political analysts declined to announce a clear winner, Ojo Público fact checked some of the statements made by each candidate during the debate and found that the three declarations Fujimori made were all false, while those made by Kuczynski were either false, misleading or questionable.

Doubts hung over the electorate just days before the election. The links between drug trafficking and Fujimori's party remain unclear and leave many questions unanswered. Moreover, the prosecution has stated that the Fujimori party hampers the investigations conducted against its members. Nevertheless, the most recent polls give the advantage to Fujimori over Kuczynski.

Doubts are also being raised about the accuracy of the information, given the links between journalism and politics that have become evident with the current controversies. For many, this is reminiscent of media strategies employed by Alberto Fujimori in the 90s.

As a result, some organizations and politicians have expressed reservations as to whether or not a possible Fujimori government can effectively fight corruption. On the contrary, the testimonies reflect the fear that the administration would become a government in which impunity prevails, or even one where the ties to drug trafficking could tighten and leave Peru on the path to becoming a narco-state.

This post is an edited version of the original published on the blog Globalizado by Juan Arellano.