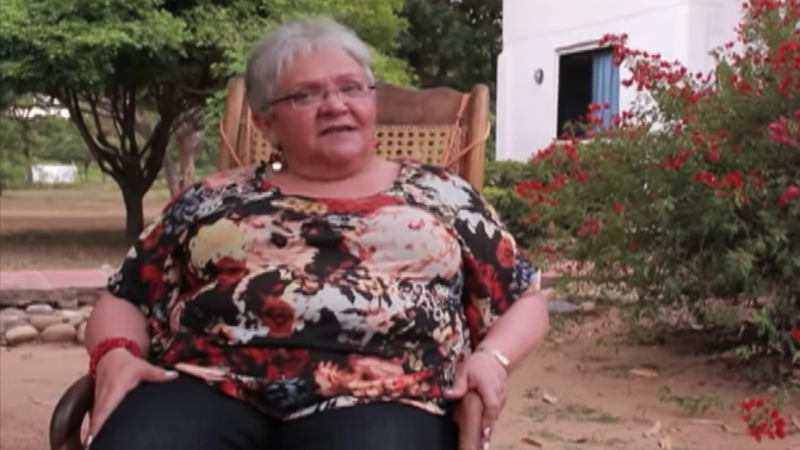 Imelda Daza during an interview made after her return to Colombia. Image: Youtube / Jonathan Fortich

Early last month, armed men broke up a meeting with Imelda Daza, the leader of the Patriotic Union party, adding confusion to an already complex peace process that seeks to end the armed conflict that's plagued Colombia since 1960. The attack took place in Cartagena on May 6, when armed men entered a union office where different left-wing groups were meeting. The Patriotic Union has expressed its concerns about the raid and denounced the act as “a sabotage of the peace process“:

[Inside the tweet: Headquarters of SUTIMAC -Construction and Building Materials Workers Union- was attacked with guns while a meeting with Imelda Daza and UP -the Patriotic Union Party-, the PCC -Colombia's Communist Party- and the JUCO -Communist Youth Movement- was taking place. Personal bodyguards reacted, gunshots were exchanged, one bodyguard was wounded. Please share and stay alert.] An attack on @ImeldaDaza and social leaders in Cartagena, is an attack on peace. Guarantees @JuanManSantospic.twitter.com/vSMw0flWvA

Thwarted attack by hit men seemed to be aimed at Imelda Daza from PU https://t.co/du2ihBJNOtpic.twitter.com/SbJfOGPtaK

Imelda Daza, age 67, spent thirty years in exile and returned to Colombia last year. In 1985, she was elected to serve as a city councilwoman in the northeastern department of César by the Common Cause movement, which was then integrated into the Patriotic Union left-wing coalition. But she never took her seat, thanks to the death threats that started shortly after her election. Consequently, she moved to Bogotá and later left the country. The councilwoman was able to escape with her life, but the political situation back home only worsened. Of her fellow party members, 13 were assassinated. Others were radicalized and joined the Revolutionary Armed Forces of Colombia (FARC).

With @Marcodhes and the leader of PU @ImeldaDaza talking about the challenges of exile in the task of building peace. pic.twitter.com/e073QGQeli

The attack in Cartagena has generated anger from different politicians and social leaders who blame the country's far right, citing its role in past attempts to derail the peace process. The Patriotic Union has been an active participant in this process since 2013, when it regained its status as a registered political party and gained recognition as a “genocide victim,” due to the systematic disappearances of thousands of its members.

To the armed far right, we say this: Nothing will stop us in our search for peace. Not your hit men or your threats or your attacks.

Paramilitaries, ghosts according to the government, attacked a PU meeting in Cartagena where Imelda Daza and union leaders were talking.

Rejection and condemnation against the attack on Imelda Daza! https://t.co/TIwluhJI5c

Attack on Imelda Daza won't be able to destroy hopes for Peace [#Paz] that exists in #Colombia today.  All of our solidarity and commitment.

The circumstances surrounding the attack, however, are unclear according to Imelda herself: the meeting was private and very few people knew about it. Also, some reports say the intrusion was not an attack but an attempted robbery.

The police say that the attack on Imelda Daza could have been a robbery attempt.

Subsequently, security cameras captured footage of one of the assailants:

In Cartagena, the man thought to have attacked the PU leader Imelda Daza and other union leaders is captured. https://t.co/SM1IppgeIl

In a press conference after the attack, Imelda Daza asked President Santos for guarantees that citizens will be allowed to exercise their political rights, and insisted that paramilitarism must be dismantled. These demands are part of the framework of what's called “the pedagogy of peace.” The government, meanwhile, has assured that “all of Colombia will take part in the post-conflict.”

On Twitter, searching for the hashtag #TodosSomosImelda (We Are All Imelda), you can find a variety of opinions about both Imelda Daza generally and the attack specifically. At the time of this writing, the Colombian government says it will offer security to Daza and other participants in the peace talks.