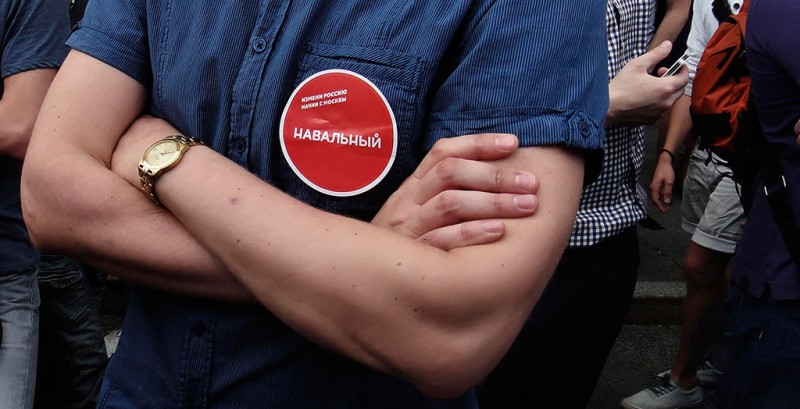 A supporter of Alexey Navalny joins a crowd outside the Russian parliament. Photo: Vladimir Varfolomeev / CC 2.0.

It’s election season in Russia, with a national vote scheduled to take place later this year in mid-September. In December 2011, the last time the country went to the polls to elect the men and women who make up the federal parliament, apparent voter fraud helped spark mass protests in Moscow that briefly challenged the political stability that has characterized Vladimir Putin’s now 16 years in power.

Today, the anti-Kremlin opposition movement isn’t doing so well. The opposition’s best hope for getting even a handful of candidates on the ballot was dashed recently, when the so-called “Democratic Coalition” collapsed. To make matters worse, hackers later sabotaged the primary voting of the one registered party within the coalition. And now allegations of unchecked and unpunished sexual harassment—on the campaign team of the Russian opposition's most visible face, Alexey Navalny—are boiling to the surface.

Earlier this week, Russia’s democratic opposition suffered its latest blow, when Alexey Navalny appeared on Dozhd television to answer viewers’ questions live on the air. One of the questions was from Maxim Katz, who helped manage part of Navalny’s Moscow mayoral campaign in 2013. Just before the actual election (there’s some dispute about whether it was two weeks or four days before the vote), Katz changed roles within the campaign, and he and Navalny's camp have been estranged ever since.

In his response to Katz, Navalny didn’t mince words, calling him a “dishonest” “con man.” Navalny went on to list various political disagreements with Katz, arguing that Katz’s support for a former Moscow city official accused of hiding assets contradicts the principles of anti-corruption activism, which is Navalny’s primary activity. Katz soon responded in a blog post, detailing his work in the 2013 mayoral campaign, and accusing Navalny of slander.

More than a squabble about strategy

Arguments like this, between oppositionists about the best organizing strategies, are not uncommon in Russia. What happened next, however, was uncommon: Catrin Patyulina, another staffer in the mayoral campaign, publicly accused Navalny’s campaign manager, Leonid Volkov, of sexual harassment. Hours after Navalny’s appearance on Dozhd TV, the popular photoblogger (and Katz’s longtime friend and business partner) Ilya Varlamov published a long text written by Patyulina, where she said Volkov stalked her, showered her in text messages, and cornered her at the campaign headquarters—all after she says she made it clear to him that the attention was unwanted.

Patyulina says Volkov fired Katz when he suspected the two had become romantic, arguing that Katz’s ouster was not the result of political differences, as Navalny claimed on television. According to Patyulina, when she told Navalny about Volkov’s sexual harassment, Navalny responded, “And I thought he only wanted to fuck you! But it turns out it’s not that simple.”

Not only did Navalny refuse to take disciplinary action against Volkov, but he later supported Volkov’s decision to remove Katz, Patyulina says. After the campaign, when Patyulina returned from Cuba on a vacation with Katz, Navalny replaced her within his anti-corruption organization, allegedly accusing her of being “one of Katz’s spies.”

Navalny has refused to comment any further about his past with Maxim Katz, which apparently includes any reactions to the sexual-harassment accusations against Volkov, who remains one of Navalny’s closest political allies. Volkov, meanwhile, has responded. In a Facebook post that he says is his final word on the subject, Volkov focused mostly on demonstrating that Katz indeed deserved to be fired, arguing that he was lazy and, at one point, even threatened to go to the police, if the campaign adopted a controversial plan to stage a sit-in at Moscow’s election commission, in the event of widespread voter fraud.

Volkov addressed Patyulina’s accusations, too, denying that he harassed her. Like many who have criticized Patyulina for going public, Volkov drew attention to the fact that she published screenshots of his text messages to her, where he flirted with her persistently, aggressively, and unrequitedly. “Publishing personal messages is unethical,” he argued, likening her revelations to the hidden camera footage defaming oppositionists that regularly airs on pro-Kremlin television networks. Volkov then shared his thoughts on being in love:

I’ll just say this: yes, I was in love. Yes, I courted her. No, I didn’t harass her. No, it wasn’t the way Katya says—we chatted for a few months, and there were different emotional moments, both good and bad. […] It’s wonderful to be in love. I hope everyone gets to experience it, even if your text messages, quoted three years later, might seem to you and all your friends to be very stupid, and for a few days you’re the butt of a bunch of funny and not-so-funny jokes. It’s still worth it.

As evidence that he did not harass Patyulina, Volkov pointed out that they both appeared together on stage at the Techcrunch Moscow event in December 2013, where they discussed their work on Navalny’s campaign. The event was three months after the election. “How’s that for ‘harassment’ and ‘deadly insults’?” Volkov asked rhetorically, parroting a phrase that Patyulina never used.

‘He knows what he did’

Patyulina told RuNet Echo that her decision to accompany Volkov to the Techcrunch event is unrelated to Volkov’s conduct during the campaign. “I wanted to talk about my work of which I'm proud. We met in public and never met again,” she says.

Patyulina says she decided to go public with her story within 15 minutes of hearing Navalny’s comments on Dozhd TV. “I wasn't prepared at all, so I started searching through my archives in order to find proof [of Volkov’s harassment].” She says she scrambled to put her story into words, sending it to Varlamov at about 5 in the morning, the next day.

Asked what she makes of Volkov’s response, Patyulina said, “I think he's trying to make my words less significant and discuss other matters. He certainly knows he violated my personal boundaries and—though I said that I didn't want any of that—he continued his pressure.” She cites an email sent in September 2013, where Volkov apparently apologized for creating an unhealthy office environment. “He might think he was ‘just in love’ or something,” Patyulina says. “But when we discussed it later, I pointed out that it was harassment, and he never denied it.”

Following Patyulina’s revelations, initial reactions to the story had surprisingly little to say about sexual harassment. As already noted, Volkov focused much of his response on dissecting Katz’s record as a campaign manager. Katz’s response, too, concentrated on debunking these accusations. Curiously, both Patyulina and Volkov don’t even write the term “sexual harassment” in Russian, spelling it out in English, like a foreign product.

Virtually the only public figure to shine a light on sexual harassment in this story has been Maria Baronova, who’s currently running for a spot in the Duma. (Until recently, Baronova was running parallel to Lyubov Sobol, one of Navalny’s closest allies, and someone Katz once fired from Navalny’s mayoral campaign.) Baronova’s Facebook post has attracted 146 “likes,” but many of the comments dismiss Patyulina’s accusations.

Patyulina told RuNet Echo that she hoped she’d never have to revisit her experience with Volkov, but she “couldn’t stand the lies” about her friend, Maxim Katz. Responding to our questions about her story, the attention seemed to surprise her. “Nobody else is interested in this,” she said.

According to sociological survey data, at least a quarter of the women in Russia say they've experienced sexual harassment in the workplace. This figure has remained relatively unchanged since 1999. In June last year, federal lawmakers rejected a legislative proposal by Russia's Association of Attorneys to make sexual harassment a criminal offense. If you'd like to know more about Russians’ legal rights in matters of sexual harassment, visit the website of the Center for Social and Labor Rights. (In Russian.)