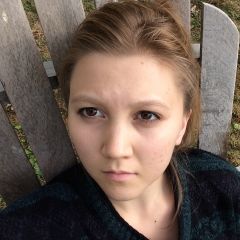 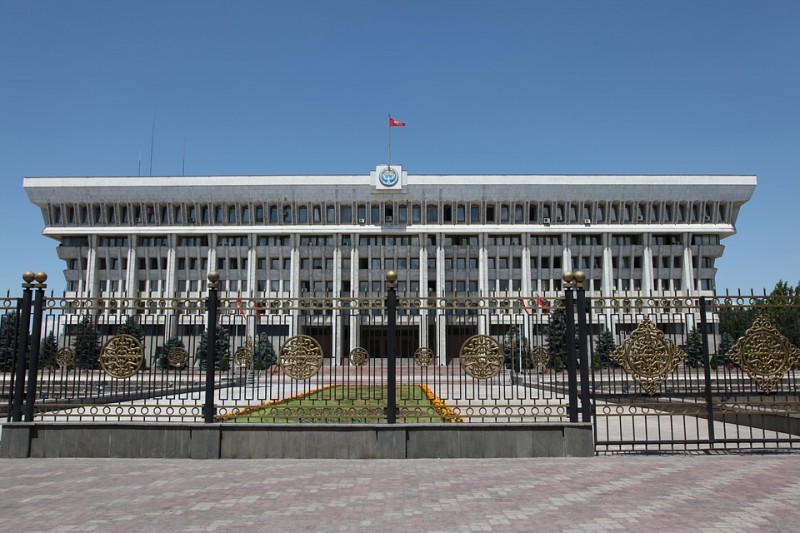 Earlier this week, MPs in Kyrgyzstan's parliament voted down a piece of legislation that would have allowed for the criminal punishment of Islamic clerics blessing marriages involving persons younger than 18-years-old.

The vote's surprising outcome tells a story about the tussle between secular and religious-minded groups for the Central Asian country's future, and hints at a brewing political power struggle as incumbent President Almazbek Atambayev prepares to step down from office in 2017.

An overwhelmingly poor country of six million people, Kyrgyzstan is ex-Soviet Central Asia's only approximation of a democracy, encompassing all the unpredictability associated with that form of government.

Just a few weeks ago, for instance, the parliament voted against a law that would restrict the activities of non-governmental organisations in a way very similar to Russia's much-criticized ‘foreign agent's law’.

Given that Kyrgyzstan depends on Russia for nearly all of its fuel imports and as a destination for up to a million migrant workers, it was widely perceived that the law would be passed with the Kremlin's blessing.

This time round, the same secular and pro-democracy types that praised MPs for blocking the anti-NGO law's passage last week fumed at their collective decision not to afford young girls protection from religious marriages, that when unaccompanied by a parallel civil union, leave them lacking legal rights.

Pedophilia is a big problem in Kyrgyzstan. According to the National Statistics Committee, 15 percent of the country's women aged between 25 and 49 years first got married before reaching the age of 18.

Who are these girls that become women too soon? Young Juliets who fell for their very own Romeos? No. It is the girls who were married, or rather sold into marriage by their parents or other relatives. Moreover, many of them were not even sold, but simply stolen [referring to practice of bride kidnapping].

Small, poor, obedient girls, mature in neither the physical or mental sense. They become slaves, including of the sexual type. They are beaten, raped and exploited like the last beast. They are deprived of their childhood, health and future.

They have no rights. They are not even the legitimate wives of their masters, because their “marriages” have never been registered. At any moment they can appear on the street – without a home, without property, without dignity.

Sad that [initiator MP Aida] Salyanova's law protecting underage girls from forced marriage did not pass. Surprising that women in the parliament were among those against.

This is not the first parliamentary scandal relating to the nikkah, or Islamic marriage law in Kyrgyzstan.

A law that would have fined mullahs who bless marriages not registered with the state failed to pass after a vote in Kyrgyzstan's parliament in 2012 that pitted male MPs against their female counterparts across party lines.

Many speculated that male MPs voting against the law were protecting their own interests, since the nikkah remains an important means of endorsing officially illegal polygyny.

On this occasion public attention regarding the bill was even greater and focused on the MPs and parties that voted against the law.

Some 61 out of 105 MPs were against the bill, many of whom failed to give an adequate explanation for voting the way they did. 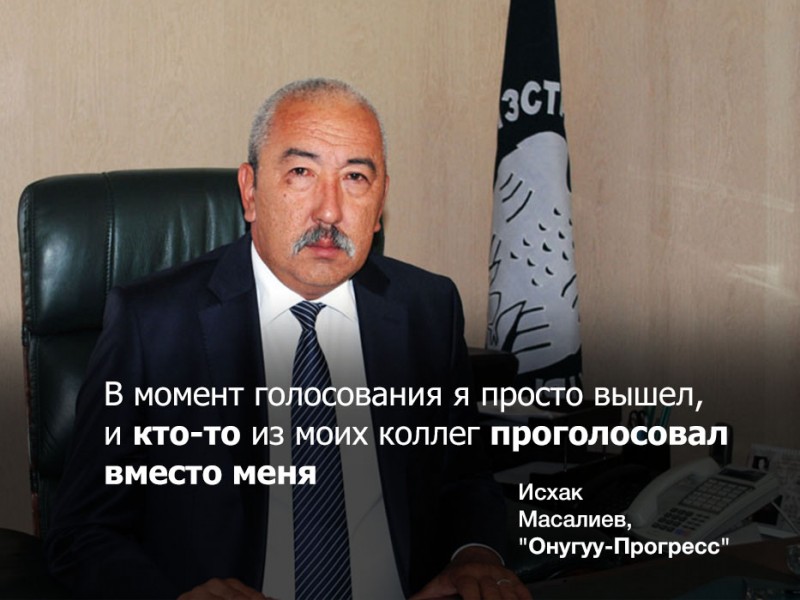 “At the moment of the vote I left the parliament, and a colleague voted instead of me,” said Iskhak Masaliyev of the Onuguu Progress Party. Kloop.kg, creative commons. 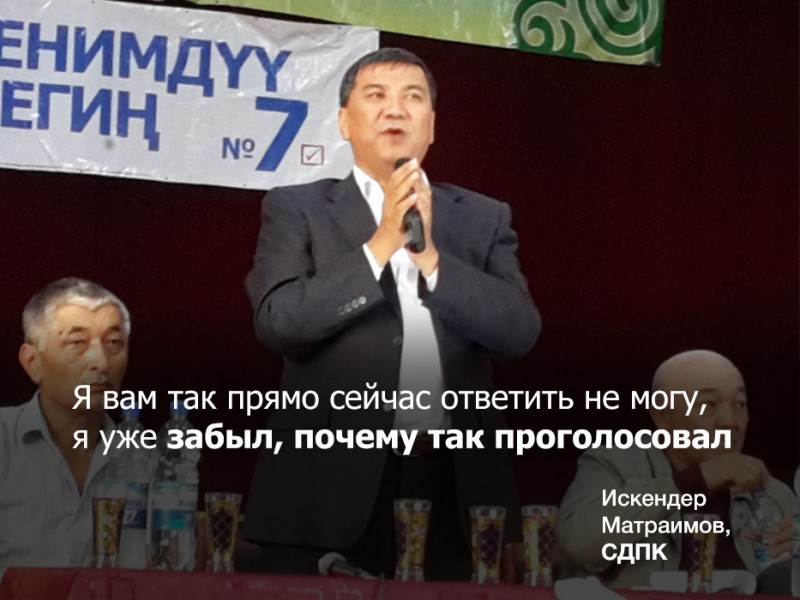 Social Democrat Iskender Matraimov said he had “already forgotten why” he had voted against the legislation. Kloop.kg with permission. 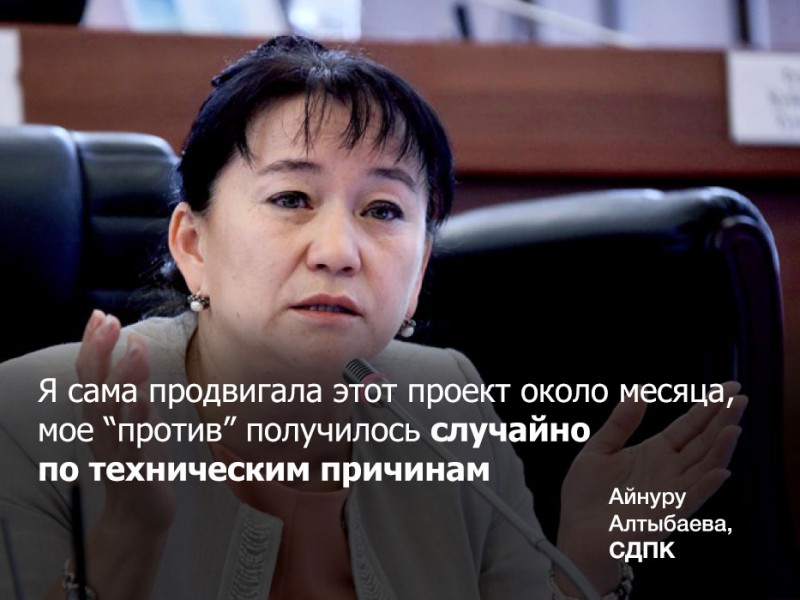 Ainuru Altybaeva, another Social Democrat said she had herself “lobbied the law for around a month. My ‘against’ was a technical mistake.” Kloop.kg with permission.

One mysterious political force — the Kyrgyzstan Party — voted solidly against the law.

Supported financially by the country's largest vodka producer, they are not a religious party in any obvious sense, but have seemingly developed a platform based on ‘morality’ to capture more conservative voters.

Some have suggested the party is a dummy party controlled by the generally secular Social Democratic Party of Kyrgyzstan that control more seats than any other party and is effectively led by President Amazbek Atambayev.

Atambayev's critics note he makes increasing references to God in his speeches, perhaps mindful of the growing importance of religion to huge swathes of the electorate.

Some have argued that the law was not so necessary after all.

At least three articles of the Criminal Code theoretically already punish pedophilia, even if none of them target religious clerics specifically.

But a sense of lack of control over the national destiny on the part of secularists may be framing the debate in respect of this and other initiatives that raise Islam's pubic profile in the country.

Another proposal raised by conservative MPs to extend lunch breaks on Friday for state officials to have more time at Friday prayers has caused more secular irritation, while a prayer room installed in the legislature in 2014 with funds from Saudi Arabia drew sharp criticism from civic campaigners.

At the heart of these controversies is not only a church and state debate, but a fearful discourse about ‘external influences’ that colours politics in the tiny, aid dependent country.

When MPs vote against a law restricting NGO freedoms, their opponents might assail them for protecting Washington's interests, for instance.

When they vote for a law restricting the rights of LGBT groups, their critics argue they are in thrall to Russia.

So, political gossips and conspiracy theorists might ask, when MPs vote for mullahs rather than teenage girls, which foreign interests are they representing this time?

Following the unsuccessful vote, one Facebooker epitomised the widespread public despair at a parliament that somehow seems to be fulfilling a number of functions except the one it was elected for — to propose, study and pass legislation in regard of the public interest.

These do nothings! They are secretly lobbying this stuff. ‘I do not understand’, ‘I left the room'…these are not answers. If you really do not understand then why are you here? To polish your backsides on these chairs?