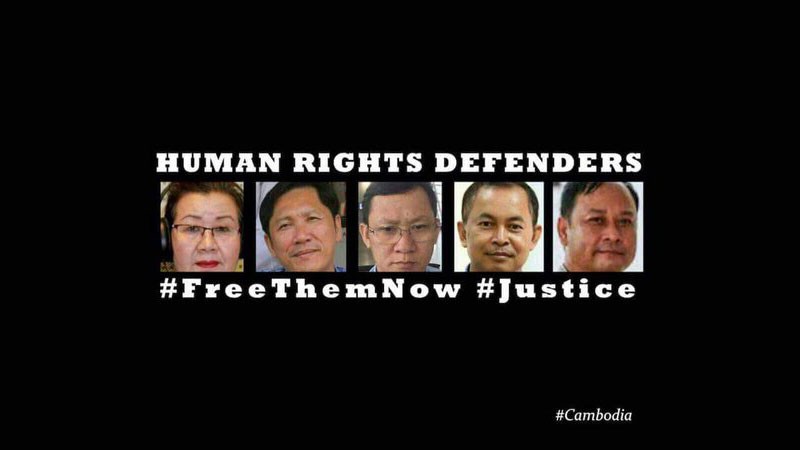 Every Monday since May 9 of this year, activists in Cambodia have been urging the public to wear a black t-shirt in support of a campaign advocating the release of jailed human rights activists.

The “Black Monday” campaign was initiated after police arrested four officers from the human rights group ADHOC and an election official on charges of bribing a woman to remain silent regarding a sex scandal involving Kem Sokha, the country’s second-most prominent opposition leader. ADHOC insists the group was merely extending legal aid to the woman as part of its advocacy work.

The detention of the activists and the criminal charges against members of the political opposition inspired various groups to come together to form the “Black Monday” campaign, which the government has labeled an “urban insurrection.” Officials have also threatened to arrest more activists, if protests are held without the required permits. Police have even told activists that they must first obtain the state's permission before posting contrary views on Facebook.

Wearing black is NOT against #Cambodia‘s govt but to insist on the govt releasing humanrights defenders #BlackMonday pic.twitter.com/5MytGZWSqT

As many as 83 civil society groups have also signed a statement condemning the actions of the Cambodian government:

The government’s fear of people wearing colors is ludicrous. Authorities targeted us just for wearing a black T-shirt, which is a peaceful expression of dissent.

Cambodia’s ruling party has been in power for more than three decades already. It was accused of manipulating election results in 2013, which prompted the opposition to boycott the parliament. The boycott ended in August 2014, leading many to expect a new “culture of dialogue” between the country’s major political parties. But last year, opposition leaders complained of political harassment when criminal cases were filed against them. Sam Rainsy, one of the country's opposition leaders, was forced to go into exile (again) to avoid detention after the government revived an old defamation case against him.

This week, the ruling party voted to press charges against Kem Sokha, even though he enjoys parliamentary immunity.

On May 31, the spokesman of the United Nations Secretary General expressed concern about the political situation in Cambodia:

The Secretary‑General is concerned about the escalating tensions between the ruling and the opposition parties in Cambodia, particularly the arrests or attempted arrests of parliamentarians, who enjoy parliamentary immunity. A non‑threatening environment of democratic dialogue is essential for political stability and a peaceful and prosperous society.

Last month, UN human rights experts issued a strongly-worded statement about the systematic campaign of Cambodia’s ruling party to harass the opposition and members of the civil society:

The investigators’ relentless quest for a confession by the young woman, their subsequent outright reliance on it to initiate the other ‘bribery’ cases against defenders, as well as public statements by senior State officials portraying the accused as guilty, generally suggest that this entire episode is nothing more than a politically-motivated persecution of civil society.

The “Black Monday” campaign is also attracting support from activists in other countries: