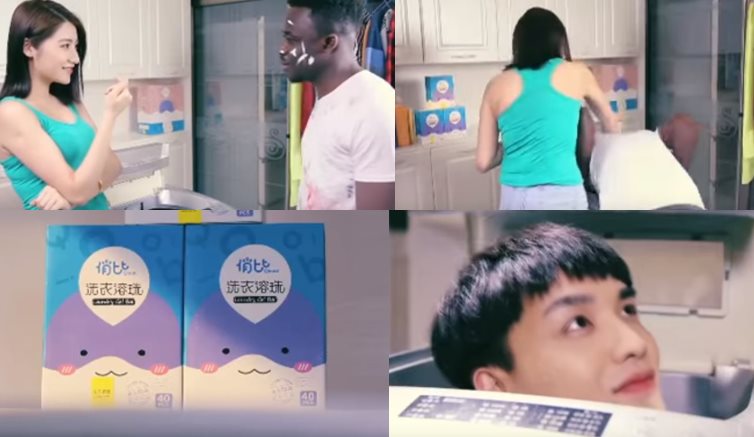 A viral detergent commercial showing a black man being stuffed into a washing machine by his Chinese girlfriend and “washed” into a handsome, light-skinned Chinese man sparked outrage outside China this week for its overt racism.

The detergent company, Qiaobi, quickly apologized and withdrew the commercial, but its public statement accused foreign critics of overreacting. Many Chinese web users supported their defensive stance, saying the ad only reflects cultural differences rather than racism and proclaiming that it is impossible for Chinese to be racist toward black people.

Outside China, people may find this ad racist. But in China, it is different. It is just an ad. Each country has its own culture, and viewpoints are also difference.

The company can produce another ad and stuff a hairy white guy into washing machine. Tell the Americans that we discriminate against blacks and whites. Are you satisfied?

There is no problem with the ad. Please don't import the political correctness about racism to China.

To prevent the avalanche of negative press from spinning into a diplomatic crisis, Foreign Ministry spokesman Hua Chunying stressed that spot was an isolated incident and that the Chinese are “good brothers with African countries”.

Though the commercial is indeed an isolated production, the denial of racism against black people existing in China and the claim that the Chinese are nothing but “good brothers” to black people are inaccurate, two anthropology students argued on investigative journalism platform The Initium.

But, they said, such racism has become so normalized that many Chinese fail to even see it.

The Chinese Communist Party, after taking control of China in 1949, did attempt to unite with their “oppressed African brothers” against Western imperialism. And Chinese officials have used the “brothers” rhetoric to describe the current “One Belt One Road” plan to extend the reach of Chinese trade to Eurasia and parts of East Africa.

Nevertheless, China has seen a rise in racism against black people since the country began to open up economically and moderate its nationalism somewhat, the two students wrote. Throughout the 1980s, there were numerous racist incidents targeting African students at Chinese universities, they explained:

Many people see the positive developments of the 1980s but forget about its dark side. One example is the campus campaign against African students. The conflicts between the Chinese and African students in the 1980s were driven by prejudice against the “inferior race”, discontentment about the subsidies received by African students, fear over the spread of HIV and the call to protect the purity of the Chinese race.

On 3 July 1979, a student from Mali was beaten by a group of Chinese students. The Chinese students said the student's skin color was too light and poured ink on him. The scuffle outside the student hostel developed into a gang fight, with 50 foreign students and 24 Chinese students injured. Later, more than a hundred African students demonstrated in Tiananmen square, urging governments to stop sending African students to China because China had very serious anti-African sentiments. Chinese officials promised to improve the Shanghai students’ education on “internationalism” and denied the incident was racist.

The conflicts between Chinese and African students did not stop after 1979. Between 1979 and 1989, in cities like Nanjing, Hefei and Hanzhou, similar incidents took place. Every time hundreds of people were involved. For example, on 29 December 1988, 300 Chinese students from Huazhong University of Science and Technology in Wuhan threw stones at foreign students, injuring a student from Sri Lanka. The Chinese students wrote letters and demanded the university expel African students because “dating between African students and Chinese girls had disrupted the stability of Chinese society”. The trigger for such incidents usually involved romantic relationships between Chinese women and African men, with the Chinese female students being labelled as “traitors of the Han Chinese” and “whores”.

Chinese authorities tightened their grip on university campuses after the Tiananmen pro-democracy student movement of 1989, and as a consequence racist campaigns came to an end. But clamping down on these very public displays of racism didn't eradicate racism, the authors argued:

They further pointed out that the internet has played a major role in this normalization of discrimination:

Chinese netizens have radically spread anti-black opinions online. They say the migration of black people to China is the most dangerous issue in the 21 century and call it “a matter of life and death for the nation and for the race”. On the online forum Jinjian, a virtual community for Chinese Communist Party supporters, the city of Guangzhou [where there is a sizable African population] having been “seized” by black people is a major hot topic among young female netizens.

Chinese nationalism is constructed according to racial order. The nationalistic cartoon Year Hare Affair depicts the African as a hippo — a lazy and stupid animal — in its season two series. China's aid for Africa has also been simplified as a last resort because “the first world refused to play with us”. Sex and reproduction is at the core of anti-black sentiment. On online forum Baidu, in WeChat circles and in the ad we're discussing today, black people are portrayed as scumbags who only want to have sex with Chinese women. Women who date black people are usually labelled as having “strong tastes” or being “poor and uneducated”.

Popular Chinese culture since the 1980s has also reinforced Chinese people's “yellowness” in contrast with scientific achievement and modernization. In the Chinese documentary “River Elegy”, for example, the Yellow River is used to represent China's stagnant, closed-door civilization, while the blue ocean represents the “democratic and open” Western society, the authors wrote.

All this has contributed to today's racism against black people in China, they said:

Today, as the country is approaching “the great revival of the Chinese nation”, the history of African brothers has passed and the inferiority complex about yellow skin vis a vis white skin has been abandoned. The Chinese want to be equal with white people, but like white people, they have to achieve their status by standing on top of black people.