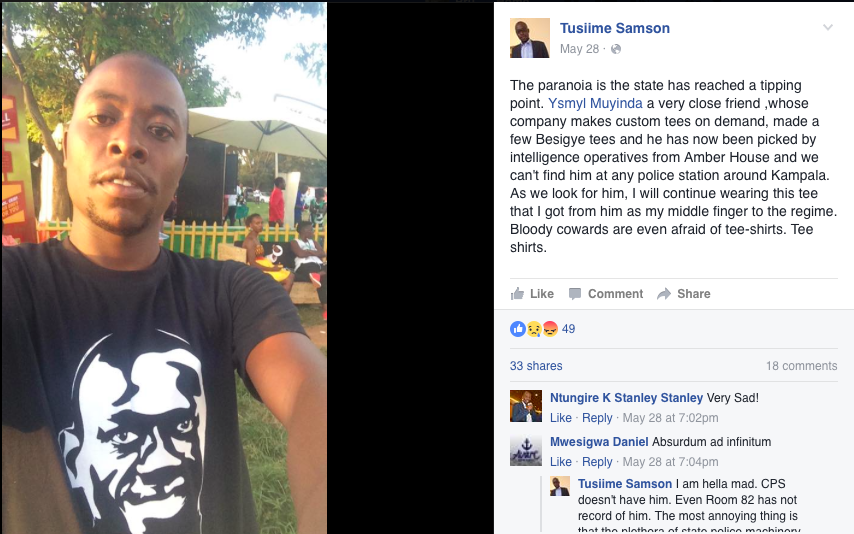 Twitter in Uganda was buzzing on Sunday, 29 May with the hashtag #FreeSamwyiri [1]. The Twitter campaign followed the arrest [2] of a Ugandan man named Samson Tusiime [3] allegedly for wearing and distributing T-shirts bearing the photo of Ugandan opposition leader Kizza Besigye.

Police allege that he was organizing “illegal” demonstrations [4] and had plans of distributing similar T-shirts countrywide. According [4] to Uganda's Independent newspaper, two other Ugandans, Ismail Muyinda and Asia Nanyanzi, were also arrested.

Tusiime had posted a message on Facebook on 28 May wearing the T-shirt in question, saying he was looking for his friend Ysmyl Muyinda [5] (presumed to be the same Ismail Muyinda reported as arrested above), [5] whose company produced and printed them. He wrote that he had gone to different police stations looking for his friend. When friends noticed that Tusiime himself had gone missing, they started a hashtag #FreeSamwyiri [1]. Police later confirmed [2] that he was arrested.

The case has agitated many Ugandans, who are in shock that a T-shirt could be enough to arrest someone. Joel Nevender, a Ugandan blogger, asked the police:

You're arresting @Samwyri [6] for exercising his freedom of expression? Because of t-shirts? T-shirts? #FreeSamwyri [1]

Can we come out and stop calling this a democracy because it isn't. Bloody tshirts. Put us in yellow jumpsuits why don't you. #freesamwyri [8]

In recent months, Ugandan authorities have been especially intolerant of criticism. President Yoweri Museveni won a controversial fifth term in office in February 2016 in an election that the country's political opposition claims was rigged. Opposition members and other activists have been challenging Museveni's victory with a series of protests they've dubbed the “defiance campaign.” [10]

Since the February election, authorities have arrested Kizza Besigye and other opposition figures multiple times as well as blocked [11] social media twice in the interest of “national security” [12].

Some things are terribly hard to spin…ati now we arrested him because why…you can't really say it was the tee shirt can you?

Patoraking, a university student, thought that this act was worse than the days of Idi Amin, the Ugandan dictator who ruled Uganda from 1971 until 1979:

Our parents can nolonger even tell us “During Amin's time, …..” because this time we r in is even worse than Amin's time #FreeSamwyri [1]

Chapter Four Uganda, a legal aid organisation, responded to the outcry by sending their legal team to the police station:

SIU Kireka stands for Special Investigation Unit at Kireka in the capital Kampala.

It is not yet known which exact charges will be laid against him. However, Qatahar Raymond, a Ugandan journalist who has been following Tusiime's case since he was arrested, speculated that he might be charged for inciting violence.

We learn that @Samwyri [6] and his friend will likely be charged with ‘inciting violence’ if they are charged, that is.