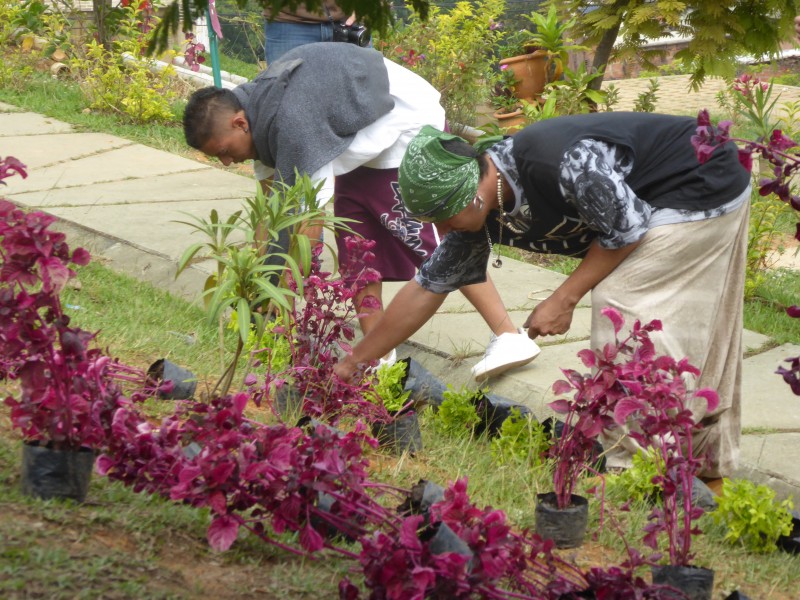 Hiphopper “El Aka” and another participant practicing Agro-Art. Photo by Louise Møller, previously published at Rapolitics.org and AgroArte. Used with permission.

If hip hop is the street, [and] below the street there's earth, we are these plants that grow through the cracks in the pavement. The cement is a way to pave over what's really happening—to say that nothing's wrong.

The quote above belongs to the hip hop artist “El Aka”, who says there's a link between his music and agriculture. He works with excluded youths from Comuna 13 in Medellín, Colombia, where he founded the program “Seeds of the Future”, which marries—unconventionally, for many people—hip hop and agriculture. El Aka says one of the most important ways to cultivate a sense of community is to blend “the recuperation of memory” and “the visibility” of people living in a particular area.

“Seeds of the Future” is dedicated to the young people overlooked in Medellín's recent urban improvements. Medellín, a city once best known for drug trafficking, is today miraculously renowned for its urban innovations. But this shimmering legacy doesn't belong to everyone, El Aka says:

In a city that they're describing as innovative, we say that it's becoming more deadly. [The same day] that they gave the city this title, 25 youths were killed.

Hip hop is an international urban culture movement that embraces the following four elements: graffiti, break dance, rap, and DJs. In Medallo (as the residents of Medellín refer to their city), hip hop has been an important trend since the 1980s—especially in the city's lower-income neighborhoods. Many young people grow up admiring their local “hiphopper” idols and dream of someday gaining celebrity on the local scene, as well. In a country like Colombia, which has been in a state of internal war for more than 60 years, and in a city like Medellín, which has been one of the roughest, bloodiest areas of the country, hip hop has played a vital role in popular resistance, in the creation of memory, and the weaving together of a fragmented society.

“Seeds of the Future” demonstrates how organized projects are capable of creating and sustaining alternative communities where victimization and social invisibility have dominated in the past:

Our process was born as […] resistance in front of a garbage dump where approximately 300 bodies were buried after military operations. If we don't join hands, in this country the same thing will keep happening. The idea is to propose [change]. We have been killing each other for 60 years. We understand that we built this country ourselves.

Seeds of the Future unites approximately 60 youths from Comuna 13 who together practice “AgroArte”. In other words, they link agro (or sowing) with art (hip hop). In this way, they teach young women and men to sow seeds, to work the land, and cultivate gardens. At the same time, the participants write and sing their own musical hip-hop creations, and they use their lyrics to document events and feelings in their own lives. By planting seeds, moreover, they take ownership of physical spaces that have been marked by violence. The spaces then are transformed into “scenes of life” that symbolically capture the theme of resistance against violence.

Many of the people in Medellín come from rural areas of the country, fleeing violence in their regions. In fact, Colombia has one of the highest numbers of internally displaced people in the world. With so many people relocating to the city, agricultural acts like sowing seeds and gardening are ways for refugees to remember their lives before they were driven from their homes by armed groups.

The participants work together, without defined leaders or hierarchies, in a circular structure that avoids power concentrating in the hands of any one or few. The goal of this project is to create a proud neighborhood community. By retaking spaces that were previously scenes of violence and military operations, Seeds of the Future transforms these areas into spaces of remembrance and dignity.

We don't believe in bureaucracy or in politicians, we believe in the capacity of people to create. And to make demands through their actions.

The program also represents a meeting place where neighbors come together to improve the community. This collaborative approach aims to make coexistence smoother and form more trusting relationships.

Some songs from Seeds of the Future can found below:

The following video (in Spanish) shows El Aka and AgroArt in action:

For those interested in learning more about what's done at Seeds of the Future, the YouTube channel of AgroArt, Barrio Bajo Producciones, has many more videos.