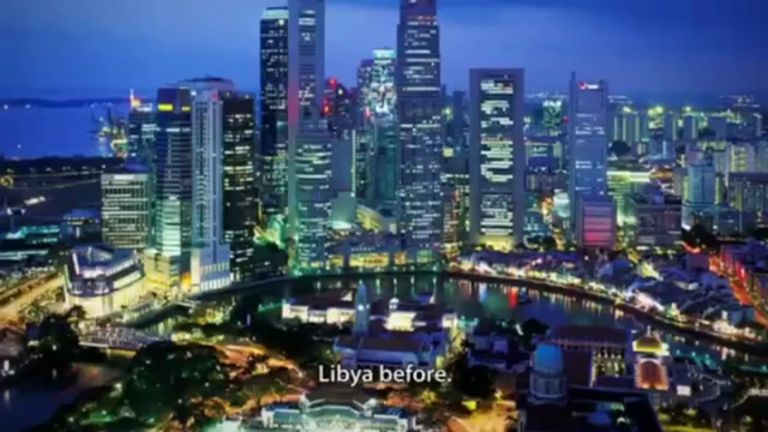 Screenshot of the video depicting the Singapore skyline as Libya. Source: YouTube

The Cambodian government recently released a video warning citizens about the destructive social impact of using civil rights like protest and freedom of expression “excessively”.

The video, entitled “Using The Rights In An Anarchic Way,” was uploaded on the government’s official YouTube channel and has since been made private. It cited the experience of Libya and Syria, using past and present photos, to tell Cambodians about the danger of “misusing” their rights in a way that brings chaos in society.

However, the video erroneously depicted the Singapore skyline as Libya before the country witnessed a revolution and then was engulfed by war. Fortunately, the video was reposted by Preah Vihear Memorial before the original video was made private:

The government’s Cambodian Human Rights Committee, which produced the video, acknowledged the technical error but insisted that it was only minor and unintentional.

But it’s not just the geographical blunder that made the video controversial. For some activist groups, the message of the video equated human rights advocacy with anarchy.

The video's narrative placed the blame for the suffering in Libya and Syria on their own citizens for provoking the conflict in their respective countries:

This is the result of how the rights were misused…The excessive use of rights will bring about destruction, broken families and loss of hundreds of thousands of lives, loss of habitat, bloodshed… As a result, all the rights were lost.

Both Libya and Syria experienced popular uprisings against their authoritarian rulers in 2011 that progressed into devastating civil wars. The militant group ISIS, which has a presence in both countries, has only worsened the situation.

Near the end of the video, the country’s defense minister discusses how color revolutions — referring to the non-violent revolutions that took place in several countries formerly belonging to the Soviet Union and perceived to be fanned by external Western forces — in other countries could be replicated in Cambodia. Activists believe the minister was referring to the ‘Black Monday’ weekly protests organized by human rights groups against a looming crackdown on political opposition. The government insists illegal assemblies by groups which intend to disrupt peace and order in society will not be tolerated by the police.

The defense minister also tried to imply that groups espousing civil rights are linked to the Khmer Rouge when he said in the video that “We have to prevent the second return of the genocidal regime in Cambodia.” The Khmer Rouge is accused of killing more than a million people in Cambodia in the 1970s.

Chak Sopheap, the executive director of the Cambodian Center for Human Rights, is worried that:

The goal of this video is clearly to intimidate ordinary people from the full and peaceful exercise of their human rights, and represents a serious misrepresentation of both domestic and international human rights law. It is a rather unsubtle reminder that this government is not beyond resorting to serious violence, if necessary, to hold on to power.

Perhaps the intention of the government in releasing the video was to threaten the public; but in the past two days, more people noticed the gaffe in depicting Libya as Singapore. Some of the tweets below reflect the sentiments of many Internet users:

OMG guys, you won't believe this but rights are actually bombs! We must stop using them! Phew thanks #CambodianHumanRightsCommittee!

A technical mistake? A deceit? Or does it show the inability of those officials? https://t.co/o6UQXc6kAN