When Immigrants in Spain Can't Find Work, Some Resort to Selling Beer on the Street 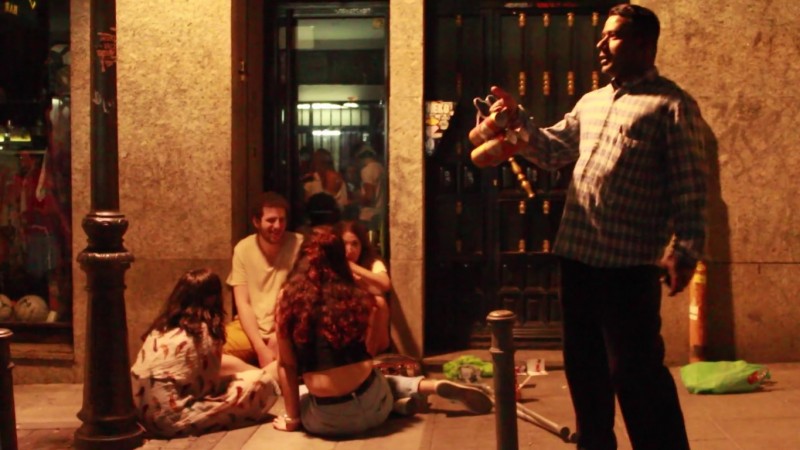 Screenshot from the documentary “Road Beers.”

Empty, crumpled cans of beer litter the ground of a trendy neighborhood in Madrid. Dawn will soon blush the sky above, but the barrio is hardly deserted. “Nobody goes to bed in Madrid until they have killed the night,” American writer Ernest Hemingway wrote in 1932 about Spain's capital city, and his observation rings true eight decades later.

Revelers continue to prowl the uneven stone streets, while garbage men start their daybreak shift clearing what's left of last night's botellón – a term which means “big bottle” in Spanish and refers to the custom of drinking with friends outdoors.

They aren't the only ones on their feet at this early hour. Street vendors hoping to make one last sale stand guard over shopping carts full of beer. Others weave their way through the neighborhood in search of customers, cans clinking in the bags they carry. Many are immigrants who turn to peddling beer when they can't find any other work.

Scenes like these play out every weekend — and some weeknights too — in Madrid and elsewhere across Spain. Young people fill the city's plazas for a good time, and street vendors scratch out a bare living by plying them with beer.

A short documentary recently published on Vimeo introduces viewers to one of these vendors: Hashem, a man from Bangladesh who says he has been peddling beer in Madrid for five years.

Filmed in 2015, “Road Beers” by Dennis Harvey profiles Hashem as he sells beer day and night, working long hours to wire money to his family. Hashem, who says he was a member of a local city council back in Bangladesh, explains that he came to Spain after a change in government led to violence.

He says he has looked for other work, but hasn't been able to find any. “I don't like selling beer,” he tells the filmmaker, but “I need the money for sending.”

Peddling beer is illegal and can carry fines of 150 euros (about 167 US dollars) or more. Hashem says police have fined him many times, but he doesn't have the funds to pay:

Many times police take [away the beer] and fine, take and fine, so it's very difficult this job.

Hashem is undocumented and says he hopes to one day obtain legal residency so he can visit his family without the fear of being prevented from reentering Spain on the journey back. In the meantime, phone calls and Facebook are how he stays in touch.

This phenomenon isn't new. In fact, six years ago I interviewed two such vendors from China for a story published on international news site Global Post. A man named Yu told me that without papers and regular work, he had no other options but to hawk beer to pay off the debt he had accumulated migrating to Spain.

In China, he said, Spain was seen as a land of opportunity, but reality wasn't matching his hopeful expectations.

And Liu, a woman who had left her young son behind in Shanghai, said she began selling beer on the street as a last resort after positions as a nanny and a convenience store clerk turned sour. “I regretted it the first day I came,” she said:

At the time, Spain was plunging head first into a brutal economic crisis that at its peak in 2013 saw joblessness reach nearly 27%. Since then, the country has slowly edged away from the brink, but the unemployment rate continues to be one of the highest in the European Union (although the true number of unemployed is likely lower than the official count, due to under-the-table work that goes unreported).

In the first quarter of 2016, unemployment was 19.81% for those with Spanish citizenship, according to the Spanish National Institute of Statistics’ Labor Force Survey. For immigrants, who represent about 10% of the country's population of 46.5 million, it was 29.72%. If you take people from European Union countries out of the mix, the out-of-work figure for foreigners rose to 33.18%.

Against this tough economic backdrop, authorities have cracked down time and again on street beer sales. Vendors, however, haven't stopped selling.

Immigrants don't have a complete monopoly on the practice. The author of a blog called No Tengo Curro (I Don't Have a Job) spoke with a Spanish street beer vendor in May 2015 and conveyed the man's advice on how his unemployed countrymen and women could get in on the business. In a comment below the post, the blogger admitted not knowing what would happen if a person, once caught, doesn't pay the fine, but maintained that doing something is better than nothing at all:

Don't be scared, man, nothing's going to happen, well, yes, it will, if you don't earn a living in this country, you won't eat.

In Madrid, the regional government doubled the fine for public drinking from 300 to 600 euros (about 670 US dollars) in 2012, but botellones haven't disappeared either. The country's youth unemployment hovers near 45%, and what jobs are available generally offer new recruits low salaries and high insecurity. Paying a street vendor one euro for a beer and knocking it back with friends in a plaza is a lot more economical than footing the bill for a brew at the bar.

So for the time being, the street beer in Spain continues to flow.