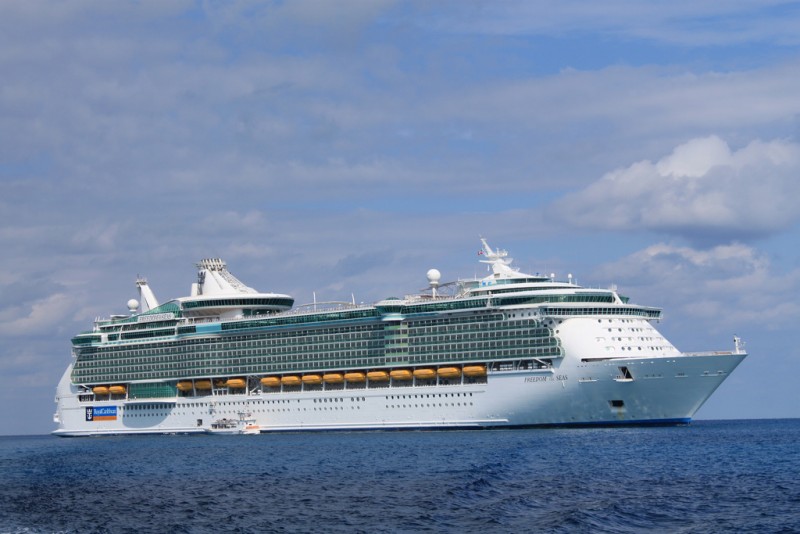 A Royal Caribbean cruise ship at sea. Photo by David Spinks, used under a CC BY 2.0 license.

In the midst of an economic slump, Trinidad and Tobago's tourism and community development ministries have jumped on board — to the tune of TT$450,000 (about US$67,500) — a concept aimed at attracting tourists to the country's Carnival celebrations via the cruise line Royal Caribbean.

Dubbed ‘Soca on the Seas’, the idea to converge Trinidad and Tobago’s top soca music performers, Carnival band designers and other entertainers for a “Carnival on the high seas” was put forward by a Trinidadian diaspora businesswoman.

I waiting patiently to hear Shamfa explain how this cruise ship thing fitting into her wider Tourism master plan…because up to now I aint hear a word about her agenda for Tourism.
This going to be E.P.I.C.

The National Tourism Policy of Trinidad and Tobago — which pre-dates Cudjoe's term in office — pays a lot of attention to cruise tourism under the policy content section. It notes that the sector has “demonstrated substantial growth” and that it “is considered one of the most robust in the tourism industry given [its] […] capacity to offer a wide range of entertainment and recreational activities on board.” Part of the country's economic goals include “[making] Trinidad and Tobago a more attractive cruise and yachting destination”.

Update: May 30, 2016 — Social media user Zico Cozier, who works as a producer at a local television station, shared the audio of a never-used interview he conducted with Dr. Nyan Gadsby-Dolly, the Minister of Community Development, Culture and the Arts, whose ministry is co-sponsoring the cruise. The audio quality is poor, so is not embedded here, but Dr. Gadsby-Dolly did liken the Soca on the Seas idea to “the reggae cruise that the Jamaican government supports”, explaining:

It docks in Jamaica and […] they do sponsorship and signage on that cruise, so we are looking at it in the sense that […] the emphasis is branding Trinidad and Tobago, so even though they’re not docking in Trinidad and Tobago they have a clear idea of who is sponsoring this cruise and where all this music and fashion and pan and so on is coming from.

But the logic of the Soca on the Seas cruise remains lost on Facebook users like Jonathan Ali, who shared a link about the initiative and quipped:

An investment has returns. What are the returns on this […]?

Meanwhile, the project's Facebook page already has over 3,000 likes and promotion for the event is in full swing.

Our hard earned money at work. Well done. They could use that money to pay the rent on 1 Alexandra street!

His reference to 1 Alexandra Street refers to a multi-storey commercial building which remained empty for while the government paid millions of dollars in rent to the owners.

A Boat Cruise to save Tourism!
Some questions bouncing around my head:
Why Yuma [a Carnival band] alone?
Why not a sampling of both traditional and contemporary bands? So our Carnival diversity is on display?
And why a boat cruise that goes between Miami and Bahamas?
How will TT Carnival 2017 benefit from this? In plain talk, not Govt Minister rhetoric.
How does this initiative factor into a larger tourism plan?
How stupid do you think we really are? Again, in plain speech, not Govt Minister rhetoric.
‪#‎TreasureQueen‬
‪#‎TourismHasCoralVision‬
‪#‎DeViceCyahDone‬

Finally, satirical website The Late O'Clock News took a jab at the whole idea on the occasion of the Indian Arrival Day holiday, which was observed on May 30:

Minister of Tourism Shamfa Cudjoe has announced the successful launch of the government’s ‘Indian Arrival Cruise’. The government is hoping that the cruise attracts tourists who will enjoy Trinidad when we’re not partying. Unlike the controversial Carnival Cruise however, this boat cost nothing but a little integrity.