Farewell to Holly Betaudier, a Man Who Dedicated His Life to Promoting Trinidad & Tobago's Cultural Diversity 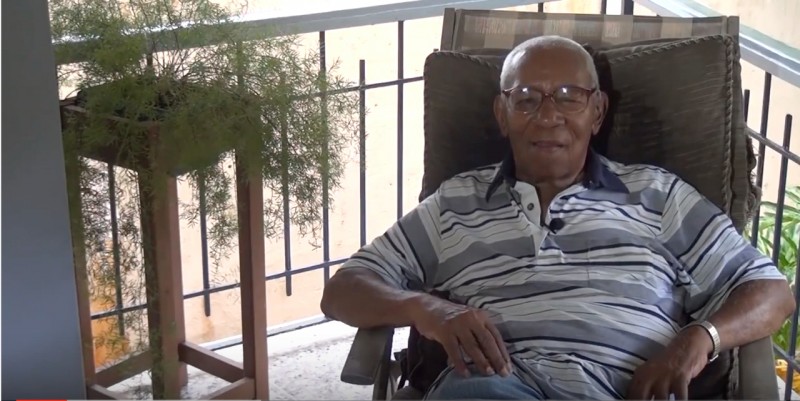 Screen grab of a video by Nnamdi Hodge and Jo-Anne Ferreira on Patois speakers in Trinidad and Tobago, featuring cultural icon Holly Betaudier.

One of Trinidad and Tobago's most beloved cultural icons has passed away. Holly Betaudier (also known as ‘The Arima Kid’, a nod to his hometown) died on May 30, 2016 at the age of 91.

He was a television pioneer who hosted one of the longest running local talent shows, Scouting for Talent, which helped launch many a musical career, especially in the genre of calypso. He was also an aficionado of parang music and up until recently, hosted a radio programme, Toute Bagai (a Patois expression meaning “everything”), which was a platform for him to proudly speak one of the dying languages of Trinidad.

On learning of his death, netizens immediately began to pay tribute. Journalist and blogger Vernon O'Reilly Ramesar posted an interview he had done with Betaudier, calling him “diminutive” and “a giant of culture in T&T”.

Rest in peace Holly Betaudier. You've given all that you could give to Trinbago. Thank you sir.

Popular local radio station 96.1 WEFM hailed Betaudier as “the original host of one of the best nation-building cultural shows, Scouting for Talent”:

Holly B’s love for local culture began in his childhood days in Arima. He became involved in media and entertainment in the 1940s at the U.S. Armed Forces radio service network, WVDI. He moved to television when TTT was inaugurated in 1962 and helped develop local entertainment and cultural shows that reflected Trinidad and Tobago.

“Through ‘The Eyes of the Nation’ Holly presented the real Trinidad and Tobago to a generation of national audiences, building bridges and creating understanding of the diversity of Trinidad and Tobago. There will always be only one Holly B,” the National Carnival Commission (NCC) wrote about Holly B, who is considered a ground-breaker in the television industry in T&T.

The National Parang Association of Trinidad & Tobago also paid tribute to one of its most dedicated supporters:

We are extremely grateful for his priceless contributions to the Parang art form, particularly for his pioneering programme ‘Holly's Parang Bandwagon’ which was aired on Trinidad and Tobago Television (TTT). We are moreover pleased that Mr. Betaudier's legacy in Parang has been kept alive as the programme continues through his son Holly Jr. who also serves as the host of our annual Junior Parang Festival.

Former Port of Spain mayor Louis Lee Sing, on whose radio station Betaudier had his show, shared warm memories of their friendship:

Holly Betaudier was not just the person you meet and you remember for that moment […] Simple, sweet, and blessed with irresistible charm […] as he grew into manhood he looked after too many as he became the go-to man, if you wished to launch a career in entertainment. […] Holly was brave to a fault and it is this Betaudier brass, which created the brand – Holly B!
He created the bridge between his and successive generations and in his latter years offered to those with ears to hear, the opportunity to listen to his oral history on not only his, but the experiences of many of our early artists who painted the tapestry of life in Trinidad and Tobago!

Gayelle TV, one of the few stations dedicated to broadcasting local programming, also tipped its hat to Betaudier:

What sad news we woke up to this morning. Rest well uncle Holly. One of the nicest people you would have had the pleasure of meeting.‪#‎ArimaKid‬ ‪#‎ScoutingForTalent‬. ‪#‎TTT‬ ‪#‎SweetParang‬. Thank you for everything.

Naturally, Betaudier's death affected the media fraternity very deeply; but his influence was felt in all spheres of the country's life, with both the government and the opposition extending official condolences on his passing.

Other Facebook users who had been touched by Betuadier's easy manner and love of local culture were also saddened. Brenda Baptiste said:

Trinidad & Tobago and the Caribbean at large has lost a great servant and gentleman.

On a blog dedicated to honouring the pioneers of broadcasting via the country's first television station, Trinidad and Tobago Television (TTT), Beatudier himself recalled what it was like to be a part of that movement — it read almost like a final farewell:

Over the years, nearly every living room had a television set and I was very proud and honoured to have been the host of programmes that aired on a weekly basis if not more often. Our presenters brought joy, sadness, information, culture and education to the viewing public. The onscreen presenters were also known to the viewers on a first name basis, just like one big family.

And then one day it seemed like the whole world crumbled. There was sadness, tears and by God’s grace there was hope. No, the whole world did not end, just our lifeline, ttt, which was part and parcel of the community for some 40 odd years, came to an abrupt end. Competition set in.

We were first, we did our best and now there are many to follow. In the closing days there were many hugs and kisses as well as sentimental recollections and then we all went our separate ways. Some of us are gone and by God’s Grace some of us are still around. It was an end of an era – God bless.