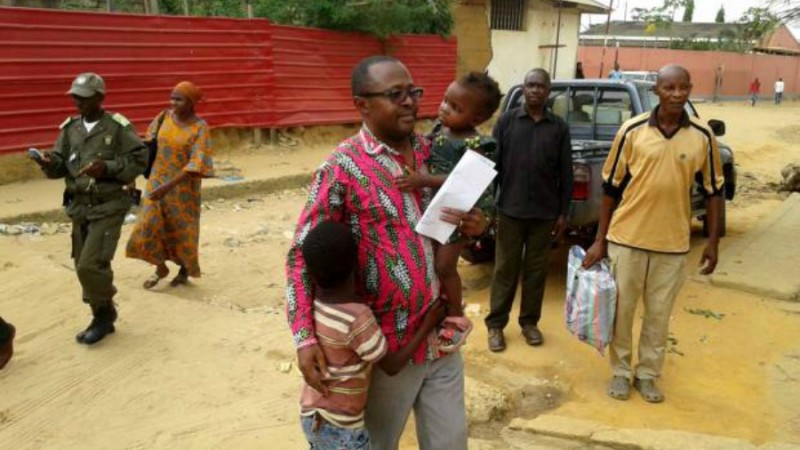 Marcos Mavungo with his family, after his liberation by the Supreme Court. Photo: Facebook / Revista Cabinda

When Angola's Supreme Court liberated the activist Marcos Mavungo, the European Union said the decision should usher in a new era of “wider tolerance” from the government regarding respect for human rights. In the communique, published on Wednesday, May 25, EU officials stated:

The recent decision of the Supreme Court of Justice acquitted Mr. Marcos Mavungo of the charges of rebellion against the State. It should allow further progress in the full and unhindered implementation of the rights of association and manifestation enshrined in Angola's Constitution and international conventions and regional human rights instruments the country adhered to.

APO – Statement of the Spokesperson on the trial of Marcos Mavungo in Cabinda (Angola): The recent decision o… https://t.co/EZvHh33Qzr

José Marcos Mavungo was imprisoned on March 14, 2015, and later sentenced to six years in prison by the Provincial Court of Cabinda on charges of “inciting a violent rebellion.” On Thursday, May 19, 2016, the Supreme Court of Justice absolved Marcos Mavungo of the accusations of rebellion against the State and decreed his liberation.

Mavungo, who returned to his family on May 20, told the news agency DW-África that he would not stop fighting the injustices taking place in Angola:

The fight continues while there are more people assassinated and persecuted; there are cases of injustice, unjust judgements, theft of public funds, children who spend 433 days without a father simply because of the caprice of someone in power… I, as a Christian, faced with all those evils, cannot just cross my arms.