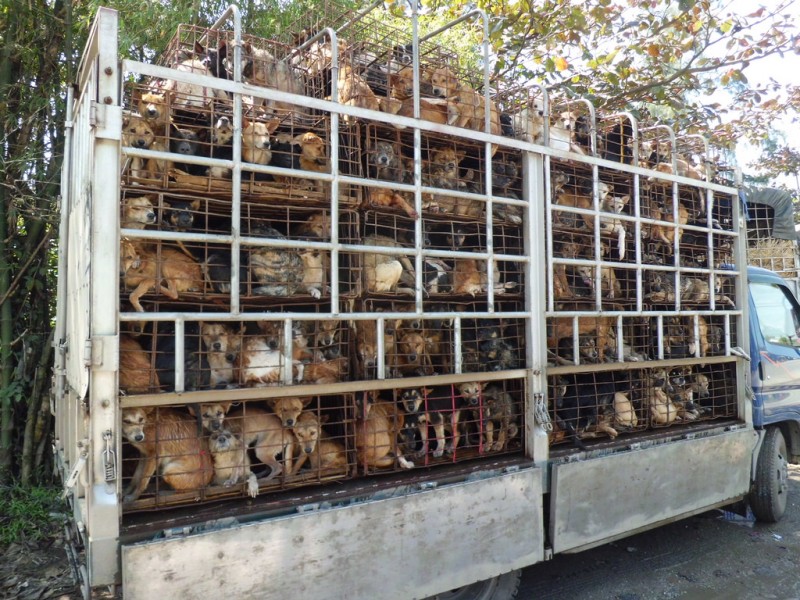 This edited article by Nguyễn Linh Chi is from Loa, an independent news website and podcast broadcasting stories about Vietnam, and is republished on Global Voices as part of a content-sharing agreement.

“How much is that doggie in the window?” That’s the song title and the query of the popular song immortalized by Patty Page in the 1950s, to which 26-year-old Mai Anh’s answer would be: nine million đồng, the equivalent of US $400.

That’s a lot of đồng for a dog, in a country where the average monthly salary is about US $220.

Anh is a teacher living in Hà Nội, the capital of Vietnam. She named her pup, a snow-white English bulldog, Bạch Bạch, which means white in Vietnamese.

I am willing to spend money because I really like this breed of dog. I got my puppy online. All white English bulldogs are very rare in Việt Nam. Luxury dogs in Việt Nam go anywhere from a couple million đồng to hundreds of million đồng.

Anh is part of Việt Nam’s emerging middle class, and expensive, imported dogs are their latest accessories. It’s a way for the young and ambitious to express taste and social status. The trend is also helping Việt Nam become more pet-loving, and thanks to the rise in the standard of living, the pet industry here is growing, fueled by a demand for premium pet goods and services.

According to Digi-escape, a Sài Gòn-based pet industry publication, the first pet shop was opened here in 2006. A decade later, there are now over 76 pet shops and vet clinics all over the city.

Digi-escape writes that the market for all things furball is still “small, fragmented and developing but with potential”.

Still, make no mistake about it. It’s difficult to be a dog in Việt Nam: They can go from being someone’s favorite pet to another person’s favorite dish as quick as the blink of an eye.

From “The Dog Meat Song” (or “Bài Ca Thịt Chó”) by Nguyễn Hải Phong to a rap song titled “Trộm Chó” (or “Stealing Dogs”) by Nam Lee, a number of songs expound on the ways dogs can be cooked or caught.

But a recent YouTube hit “Thịt Chó Không Ngon Đâu”, meaning “Dog Meat is No Good” by entertainer Huy JOo, is receiving love from pet lovers all around the web for its humane, though somewhat idealistic message. The song is a parody of the popular love song “Giữ Em Đi”. Huy JOo keeps the original catchy melody, while switching up the lyrics to call for a stop on dog meat consumption.

“I always remember my doggie, out playing when it was snatched. And I vow to never touch this delicious dish again, because I love dogs so much,” he sings.

As pet ownership increases, the dilemma of dog meat consumption is arguably clear. The ethics of eating any meat is hotly debated around the world. But it’s the treatment of these animals that is raising alarm bells.

There is a myth that the more pain the animal has to suffer before being killed, the tastier the meat. Some restaurants hang dogs, then bludgeon them to death to maximize the fear factor.

Methods of dog slaughtering can include anything from electrocution, burning, chest stabbing to throat slitting. A horrifying fate one can only imagine coming out of a horror movie is indeed the reality for many dogs in Việt Nam. There is no evidence to show how violently an animal is killed relates to the meat quality outcome, but watching this inhumane practice is heartbreaking.

According to the Asia Canine Protection Alliance, an estimated five million dogs are killed annually for meat in Việt Nam. That figure puts the small southeastern nation second on the list of Asian countries which eat the most dog meat, after China.

And not just dogs are being eaten in Việt Nam. Cat meat is also considered a treat in many parts of the country. Although it is illegal to consume cats, there are still plenty of restaurants serving cats in the north. A story in the South China Morning Post Magazine on the illicit cat trade quotes the owner of a restaurant located in Vietnam's Bắc Ninh province, saying

Everybody wants to eat cat now – it is more delicious and exotic than other kinds of meat, and some people are superstitious and eat it to bring them strength and good fortune.

Ironically enough, the restaurateur also shares that lawyers, policemen and rich people are the restaurant’s regulars.

The combination of tradition, the belief that eating dog meat brings good luck, and social custom will make it very difficult to wean people off the taste for dog meat.

Despite the many challenges, the animal rights community is growing rapidly in Việt Nam. Activists are becoming more vocal in the fight, not simply against dog or cat meat consumption, but against the larger issue of animal cruelty.

Catherine Besch, one of the co-founders of the Vietnam Animal Welfare Organization (VAWO) in Hội An, in central Việt Nam, says that one of the biggest problems is education. VAWO is amongst many young animal advocate groups who are actively working to make Việt Nam a friendlier place for animals.

She says there is a need for a collaborative effort between animal rights organizations in order to make animal welfare legislation happen in Việt Nam:

To get a grassroot social activism movement going in a country where people are into it but they don’t know what to do, two steps are needed. Step one: Love animal. Step two: [People say] I don’t know what to do now. The idea is to try to figure out how to bind them together and give them step by step results-based tasks so everyone knows what to do next. Get on the same page. If we are separate, we are a whisper. If we are together, we are a roar. We can make a voice so much stronger in that country.

Besch also wants society and the legal system to take care of animals, she says, so the rescues don’t have to. It’s the dream for decades and decades in the future, but it’s the goal that they constantly work towards, she adds.

The new generation of pet lovers who see animals as friends will serve as the driving force against animal cruelty in Việt Nam and push back the demand for dog or cat meat. Việt Nam is still a long way from becoming a safe and friendly country to pets, but changes are happening.

Listen to the podcast about the dilemma of eating dog meat in Vietnam: