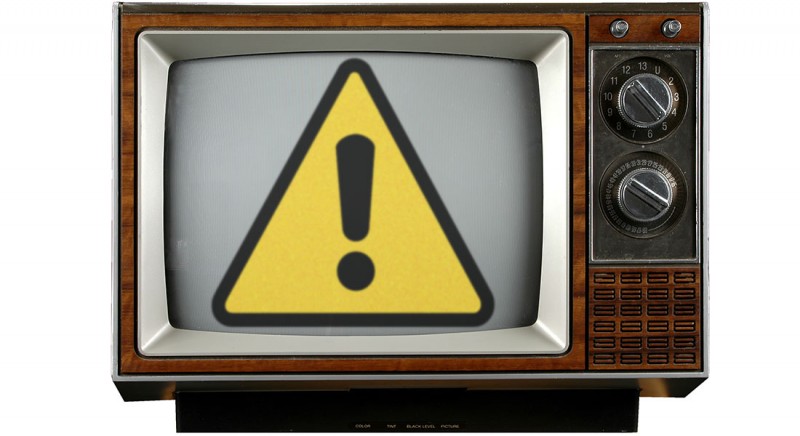 When people think of Russia’s independent media, their minds don’t often turn to Yakutsk, the capital of the Sakha Republic, located 450 kilometers (about 300 miles) south of the Arctic Circle. But it was a newspaper in Yakutsk and its criticism of the pro-Kremlin media that produced one of this weekend’s most viral images on the Russian Internet.

On May 27, an economics professor named Tuyara Gavrilyeva shared [1] on Facebook a photograph of the TV listings in her local newspaper, “Yakutsk Vechernii [2]” (Yakutsk Evening). In the photo, above the television program for the station “NTV,” the newspaper added a warning to readers. It said:

A Yakutsk newspaper printed a warning about how national network often lie.

Gavrilyeva told [6] the news website TJournal that she isn’t sure how long Yakutsk Vechernii has been warning readers about the dangers of watching news channels, but it’s a good bet that the warning started appearing some time after March 4, 2016, when NTV aired a defamatory investigative report called “Debtors to the US State Department [7].”

NTV’s controversial documentary targeted several popular media outlets throughout Russia’s so-called “regions,” in cities far from the country’s “center” in Moscow and St. Petersburg. The station took aim at recipients of loans from the Media Development Loan Fund (known today as the Media Development Investment Fund), which has received funding from the philanthropist George Soros, whose Open Society Foundations and OSI Assistance Foundation have been outlawed in Russia.* (In November 2015, the Russian Attorney General declared [8] these organizations to be “undesirable.”) NTV’s investigation accused Yakutsk Vechernii, along with several other media outlets, of changing editorial policy on orders from the Media Development Loan Fund (which NTV equates with the US State Department, in a poorly explained conspiracy theory).

Immediately after the documentary aired, the representatives of four media outlets, including the director of the publishing house that manages Yakutsk Vechernii, appealed [9] to Russia’s Press Council, an independent public board where journalists can submit complaints and resolve “information disputes.” On May 12, the Press Council released its findings [10] regarding the NTV report, calling the broadcast “inaccurate” and “defamatory.” The Press Council also published a lengthy review by a media and communications professor, arguing that NTV went so far as to “distort” the very genre of investigative reporting.

After the program first aired on NTV, Leonid Nikitinsky, a member of the Presidential Council for Civil Society and Human Rights, wrote a review [11] in the newspaper Novaya Gazeta, saying NTV reporters used shady means of gathering information, which they then edited and took out of context. Nikitinsky also took issue with the basic premise of NTV’s show, which implied that receiving loans from foreign investors poses dangers to media independence. According to Nikitinsky, the decline of loans and the rise of direct funding from government-controlled institutions has been disastrous for Russian journalism:

In practice, loans (it doesn’t matter whose) create good media, but if it’s just a Russian-style free lunch, then the result is some sad piece of … (well, you get the idea). And in times of crisis, when the state suddenly needs to discuss not altogether popular measures with civil society, it becomes clear that the mediasphere has been destroyed by propaganda and these handouts.

Earlier this month, Russia’s Central House of Journalists named [12] Yakutsk Vechernii one of the top ten newspapers in the country. According to the paper’s own website, it has a distribution of roughly 43,000 copies and has been in business since 1994. The publication receives no state or municipal funding and claims to be “completely autonomous, self-sustaining, and independent.”

* Note to readers: RuNet Echo is funded by the Open Society Institute.