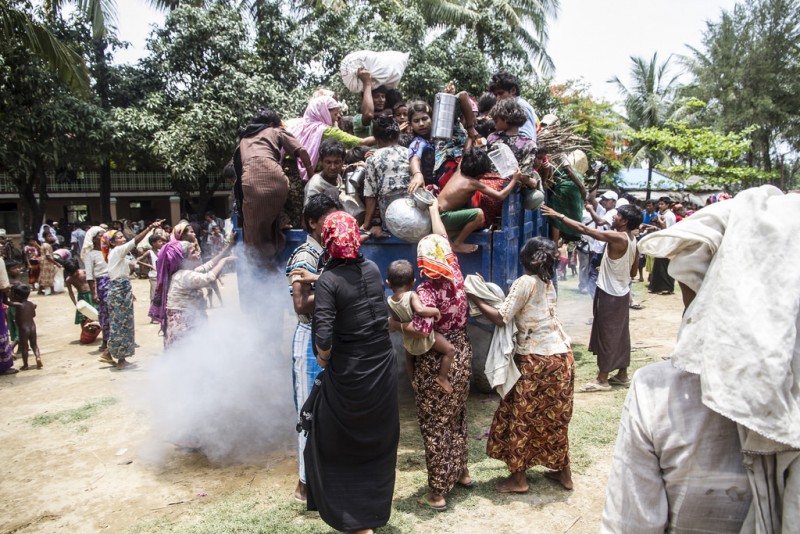 For human rights groups outside Myanmar, the Rohingya people are among the most persecuted ethnic groups in the world. But for Myanmar authorities and Buddhist nationalists, they are treated as illegal immigrants living in the western Rakhine State.

Myanmar’s foreign ministry is asking other governments to refrain from using the word Rohingya since it is deemed offensive by many people inside the country.

But last month, the United States embassy in Myanmar issued a statement expressing condolence to the families of Rohingya boat refugees who perished in an accident.

…we extend our condolences to the families of the victims, who local reports state were from the Rohingya community. Restrictions on access to markets, livelihoods, and other basic services in Rakhine State can lead to communities unnecessarily risking their lives in an attempt to improve their quality of life.

This statement angered Buddhist nationalists who organized a protest in front of the US embassy. They carried banners with messages like “Those who use the word Rohingya are our enemies!” and “Don’t meddle in our internal affairs!”

They insist that the Rohingya should be called “Bengalis” since they are “illegal immigrants from Bangladesh.”

Myanmar Nationalists Stage Protest in Mandalay Against Use of Term #Rohingya by U.S. https://t.co/l7JvK3BLK5 pic.twitter.com/yQCMBSOnGj

The majority of Rohingya are Muslims who have been living near the Myanmar-Bangladesh border for hundreds of years. But the Myanmar government has refused to recognize the Rohingya as one of the country’s ethnic groups.

Since 2012, several clashes between hardline Buddhist and Muslim groups have displaced the Rohingya from their communities. Some fled to neighboring Southeast Asian countries as boat refugees while many took shelter in makeshift camps.

Addressing the United Kingdom Parliament, Myanmar’s first ever Catholic Cardinal Charles Maung Bo described the Rohingya as “among the most marginalized, dehumanized and persecuted people in the world.”

His statement was reported by the World Watch Monitor website:

They are treated worse than animals. Stripped of their citizenship, rejected by neighbouring countries, they are rendered stateless. No human being deserves to be treated this way.

Scot Marciel, the new US ambassador to Myanmar, acknowledged the position of the Myanmar government towards the word Rohingya but stressed that communities have the right to be called by their names.

Marciel’s statement sparked angry online comments in Myanmar despite the fact the word Rohingya was not mentioned by the US envoy.

The Irrawaddy, an independent news website, published an editorial on the topic.

Instead of fighting over a terminology, it urged dialogue between Buddhists and Muslims:

…rather than arguing over terminology, it is crucial to initiate a dialogue between the Buddhist majority and Muslim minority in Arakan State and negotiate a lasting solution, which would alleviate the everyday suffering of all communities in the impoverished state.