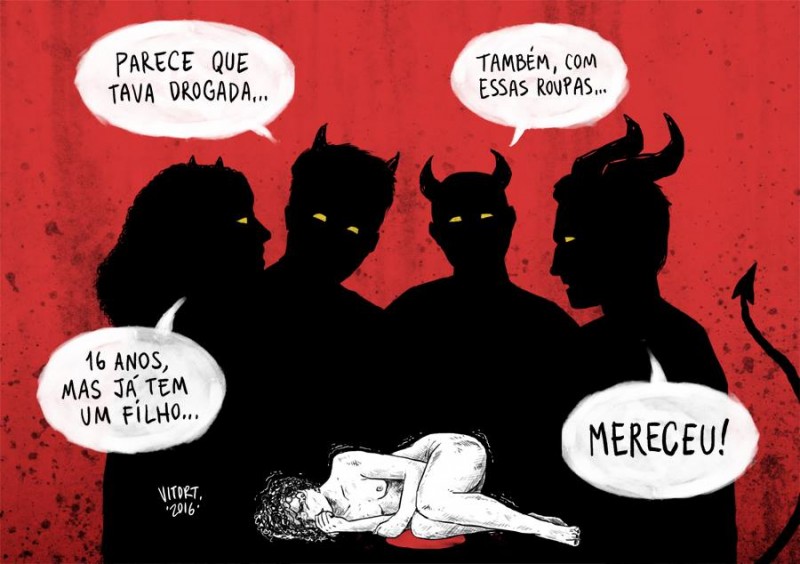 “Looks like she used drugs”, “Well, with those clothes”, “16 years old and already has a child”, “She deserved it!”. Cartoon by Vitor Teixeira, shared on the artist's Facebook page.

On a Saturday night, a 16-year-old girl left her parents’ home in a suburban area of Rio de Janeiro and went to her boyfriend’s place. The couple was supposed to go to a party afterwards. She remembers arriving at his house and falling asleep, only to wake up on Sunday morning, in another house, feeling dizzy and surrounded by armed men. She woke up, put on some clothes a man had left lying around, and took a cab home.

In it, she appears lying in bed naked and unconscious, while several men make jokes and laugh. They can be heard saying, “This one got pregnant from more than 30″.

One of the men took a selfie with her in the background and posted it to Twitter. Others reacted to the video with similar comments.

As media started to cover the case, a wave of victim-blaming manifested itself in comments on social media.

A Facebook page collected screenshots of some of the comments: “This wouldn’t have happened if she had stayed at home”, read one. “If she had gone to church instead”, read another.

Details surrounding her case, such as the fact her boyfriend and the other 32 men were drug dealers, that the party and gang rape took place in a favela, and that the girl admitted using drugs to the police, all helped the victim-blamers relativize their empathy towards her.

But broad condemnation of the crime was also quick in coming.

Twitter soon blocked the profile of the man who uploaded the video. A plea, mostly led by feminist pages, was spread across social media asking people not to search for the video on the web.

In less than two days, the Public Attorney’s Office of Rio de Janeiro received some 800 complaints related to the case. On Friday, four suspects were already identified and brought in for questioning. The girl’s boyfriend of three years is one of them.

Protests are being scheduled across the country for the weekend of May 28-29, as women swap their profile photos for an image that reads “for an end to rape culture”.

1. Not one less. We don't leave any woman behind. Our power of mobilization and our strength is putting all others to shame.
2. It was not her fault. Thirty men and not one was capable of stoping and saying, “guys, wait, this is kind of wrong”.
3. Is there anyone who doubts the existence of rape culture? Come over here. Explain to me how 30 guys raped an unconscious woman if there isn't a veiled culture saying that ‘sluts’ deserve to be raped (and put into that category any woman who doesn't follow a subjective code of conduct).
4. Are you ready, as a man, to tell your jerk of a friend that he is a jerk and a sexist for the way he talks about women, for the videos he shares? Are you ready to try and show at least some of them that this prepares the ground for violence against women? Because this is the hard part.

“It wasn't 30 against 1. It was 30 against all”. Justice is not enough, what I want is the end of sexism. #AngerWithReason

The certainty of impunity

If not for the rapists exhibition of their crime, the case may not have gathered any attention at all.

But what is it that makes a criminal proudly exhibit a crime?

Silvia Chakian, a prosecutor and coordinator of a group that fights violence against women, analysed this case in an interview with BBC Brasil:

[The episode] shows that practicing a crime of such nature is a motive to vanity, something to be displayed.

While rapists rely on impunity, victims know it as fact.

As journalist Mariana Varella recalls, in 2014, another girl was found by her parents sitting on her bed pointing a gun to her head, after being raped by her grandfather.

Last week, a judge ruled that there was not enough evidence to a conviction. The grandfather himself admitted to having had sexual intercourse with the girl, but the judge believed in a narrative wherein the three women in the same family — the girl, her mother and her grandmother — were plotting against the man.

The most recent research on sexual violence in Brazil revealed that every 11 minutes someone is raped in the country. According to the Annual Public Safety Report, 47,646 cases were registered in 2014.

The same week the gang rape case of the 16-year-old in Rio happened, another teenage girl was raped by five men in the northeastern state of Piauí and the case barely received national coverage.

Coincidentally, the same day the case became public, the Minister of Education of the current interim government met with Brazilian actor Alexandre Frota, known for boasting on national TV about how he once choked a woman until she fainted and then proceeded to rape her, a crime for which he never faced prosecution.

Frota has for the past year been involved in the pro-impeachment movement against President Dilma Rousseff and has been a notorious defender of measures that would prohibit “Leftist indoctrination” in public schools.

Included in “leftist indoctrination”, according to its opponents, are lectures and textbooks that deal with gender issues, an issue Frota says was bought up in the conversation with the minister.

But the case involving the 16-year-old girl is helping erode women's tolerance for such public displays of sexism.

These are not 30 monsters together. There is no pathology there. This is a cultural issue. These are 30 people who took part in a crime and none of them act to avoid prevent such a crime happening. This reveals a society that is criminal and violent against women, which sees that a woman’s body as made for man's consumption.