The notification, which cites complaints by parents about “inappropriate interactions,” was signed by the school's secretary of the discipline committee, Dr. Arbab Khalid Cheema. Before long, a copy of the notification was shared widely on social media. The text stated:

In view of our cultural and religious bindings and complaints by parents, inappropriate interaction between male and female students is strictly prohibited within the University premises.

Students are not allowed to sit anywhere in the University premises as a couple. However, they may sit in a group of 3 or more.

In response, students have complained that the university is trying to enforce cultural and religious norms. In a widely-shared [2] Facebook post, Waseem Altaf [3] wrote:

While co-education is no more an issue with schools of higher learning in the enlightened world,our so-called educationists in a significant number of universities are perturbed by male-female interaction at the campus-lest they commit a sin.

Rather than focusing on improving the quality of syallabi, capacity building of the faculty, library and lab facilities,they are more concerned with “piety and character” of the student body.

Before long, Internet users added to the debate the university's student dress code [4], which sets out the following requirements:

The clothing worn will be clean, neat, modest and reflective of the culture in which we are operating. The dress restriction is not to impose any rigidity regimentation but it is in accordance with the spirit of discipline which is the cardinal aspect of the life at the University of Sargodha, Lahore Campus

The school's dress code stipulates different clothes for men and women, putting an extra burden on women to avoid things like “excessive” makeup and jewelry, as well as clothes bearing obscene remarks. Failure to observe the dress code can result in fines and even expulsion. 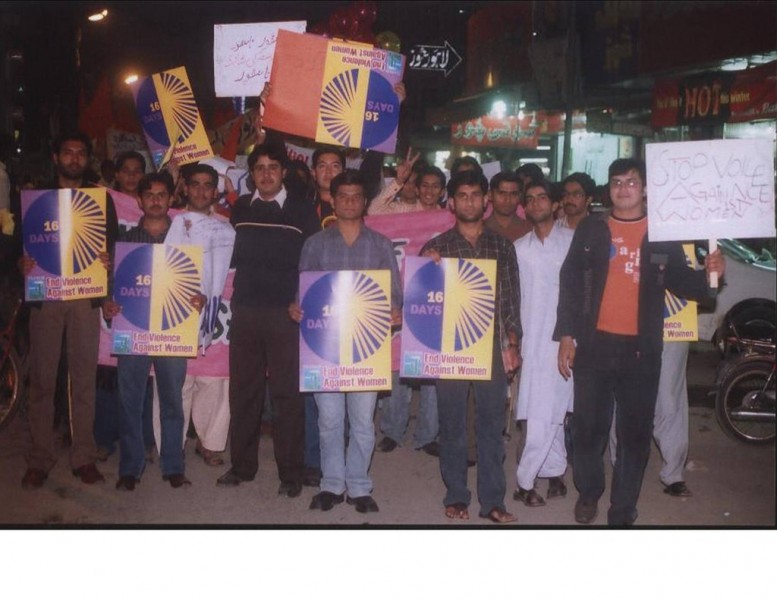 In 2008, students from University of Sargodha's main campus participated in a 16-days demonstration to end violence against women. Photo: CWGL / Flickr.

Not that I ever would, but remind me to never go to the University of Sargodha.

Some time ago, a similar case was reported [12] in Pakistan at the University of Swat [13], Kyber Pakhtunkwa, where administrators considered prohibiting male and female students from walking in tandem and sitting together, both inside and outside. Students caught violating the ban would face fines of PKR 5,000 ($47). The school's vice chancellor rejected the idea, however, and suspended [12] the chief proctor as a disciplinary measure.

The dress code and crackdown on campus sexual behavior coincide with the rising international status [14] of several Pakistani universities. Co-education universities are commonplace in Pakistan and make the top ten [15] institutes, according to the Higher Education Commission. For students and families that are uncomfortable with men and women learning together, there are still many samesex universities available.

Critics say the focus on keeping men and women at a distance in universities is a useless distraction from the more important, substantive challenges of improving and further building the country's system of higher education.