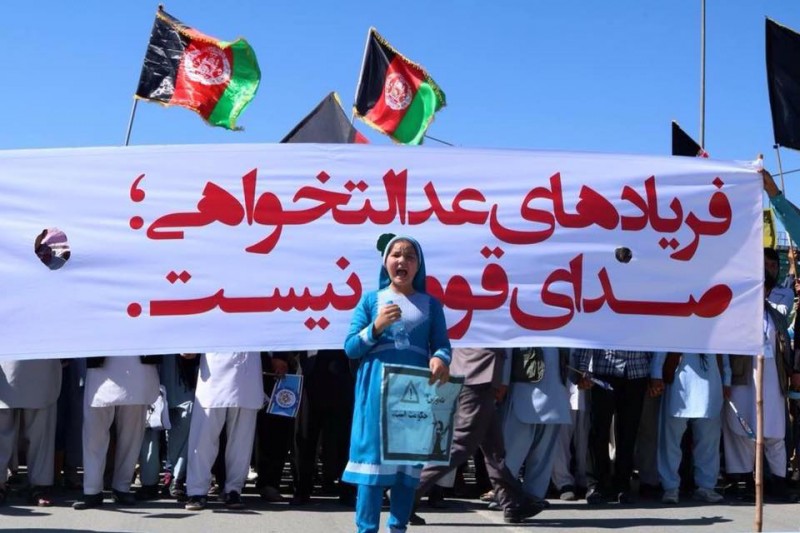 A Hazara girl standing in front of a march in a TUTAP demonstration. Shared via Republic of Silence Facebook page.

Last week thousands of ethnic Hazaras held demonstrations in various parts of the world to protest against a proposal to change the planned route for a new electricity transmission line Turkmenistan-Uzbekistan-Tajikistan-Afghanistan-Pakistan (TUTAP).

The route switch suggested by the government is just one of a number of injustices that have served as a basis for the minority to mobilize in recent times.

The electricity line was originally planned to go through the Bamiyan province, which is heavily populated by Hazaras.

However, the government subsequently decided that the line would go through Salang province instead.

TUTAP is funded by the Asian Development Bank to give Afghans access to electricity, and link  up the other ten electricity grids that already exist in Afghanistan.

Criticisms regarding the government’s decision to change the route of the project from Bamiyan to Salang have been on the rise, deepening splits riven along ethnic lines. 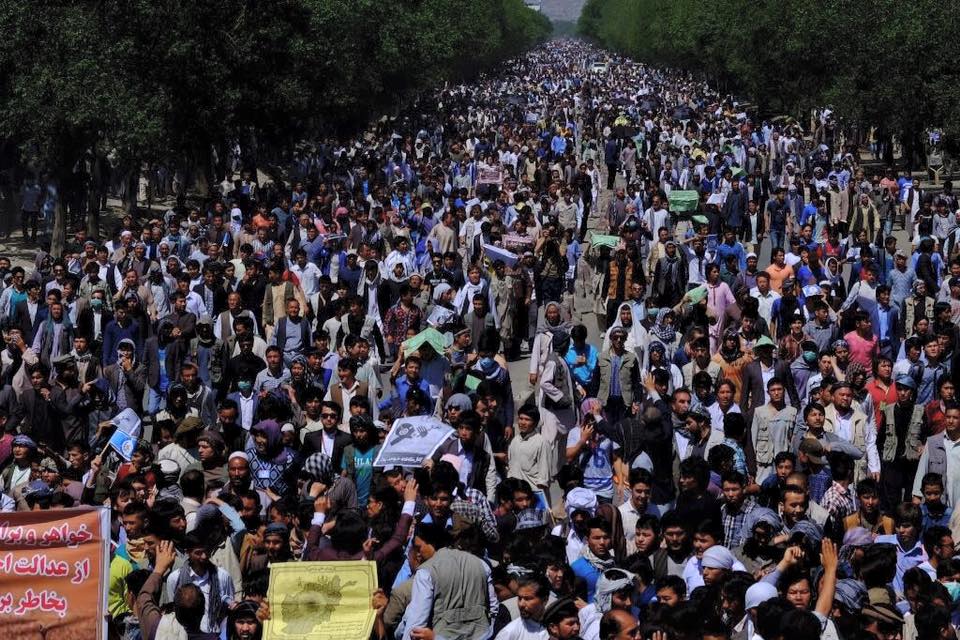 Afghan Hazaras’ massive demonstration in Kabul on May 16, 2016 protesting TUTAP's route change. Shared by the Republic of Silence via its official Facebook page.

The Kabul demonstration was among the biggest in the post-Taliban era while the level of participation in these protests on the part of women both inside and outside Afghanistan was unprecedented.

Keyhan Farahmand highlighted this theme by tweeting an image from the May 17 protest in Canberra, Australia.

On social media, the protests were powered by the #EnlighteningMovement hashtag among others playing on the theme of electricity.

One of the best scene from today's demonstration; #Kabul #EnlighteningMovement
Photo credit to: Tahmina pic.twitter.com/yA4NDbKgQH

Amid the discontent Afghan president, Ashraf Ghani has appointed a commission to review the TUTAP project’s contracts, and has stalled the project's implementation.

Many Hazara protesters have said they believe corruption is the main cause of the re-route.

Ghani has also said his administration will ensure Bamiyan receives electricity from TUTAP, even if the main transmission line does not traverse province.

He blamed the former Karzai administration for the decision to re-route the project, a claim that an ex-aide of Karzai's flatly rejected.

But while the episode has highlighted the infighting and bickering typical to Afghan politics, it has also testified to the increasing capacities of Afghan civil society to mobilise inside and outside the country and make its voice heard peacefully.

Hampered by the withdrawal of the bulk of US military forces that has emboldened a multi-pronged militant insurgency, the administration of Ashraf Ghani has nevertheless made a number of missteps that have turned the public against it.

When making a speech at the Royal United Services Institute (RUSI) in London May 13, Ghani was heckled by an Afghan Hazara protester and called a liar for not fulfilling his promises regarding the TUTAP project.

As the protestor was escorted from the room, another was on hand to continue the heckling, before he was shockingly manhandled and removed from the scene by the president's guards.

Videos of the incident received a lot of play on Afghan social networks, sparking even more anger among Afghans, especially Hazaras.

Hazaras, who may number anywhere between 10 and 20% of Afghanistan's total population (no official census has ever been conducted) endured more persecution than any other ethnic group during the reign of the Taliban from 1996 to 2001.

In the post-Taliban era the group has found its voice but remains frustrated and marginalised in a domestic political environment dominated by Pashtuns, primarily, and Tajiks.

In November 2015, thousands of people, mostly Hazaras, marched on Kabul to protest the beheading of seven Hazara hostages in southern Afghanistan carried out by militants apparently loyal to the ISIS extremist organisation.

Unfortunately, the Afghan government did little to bring the perpetrators to justice, further feeding the sense of injustice that manifested itself once again on May 16 in Kabul.

The Ghani administration's desperate response to the most recent protest — erecting a wall of steel containers in central Kabul to block the march — was symbolic of the relationship between a government and its people that has been hovering around breaking point for some time now.

But as public anger grows, so does the risk that future protests will prove more difficult to contain.