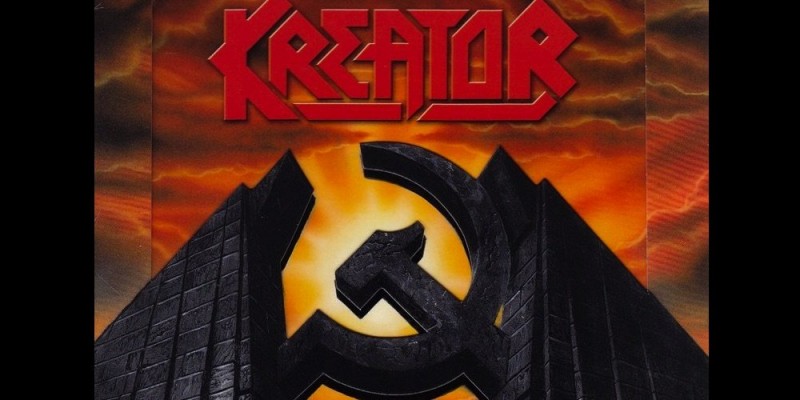 A store owner in Indonesia selling a t-shirt which features the album cover of German band Kreator was arrested for promoting the banned hammer and sickle communist symbol. Source: Wikipedia

The police and military in Indonesia are stepping up the campaign against communism by arresting people suspected of promoting the outlawed ideology.

Earlier this month, two activists in Mollucas were jailed [2] for wearing t-shirts that bear the logo “Partai Kopi Indonesia” (Indonesian Coffee Party). According to the police, the symbol resembles the acronym of the now-defunct Indonesian Communist Party (PKI), even if the t-shirt refers to coffee lovers.

Meanwhile, the owner of a memorabilia shop and his employees were also arrested for selling t-shirts of German heavy metal band Kreator that feature [5] the hammer and sickle logo.

In February this year, the Belok Kiri Fest (Turn Left Fest), which was organized to discuss leftist ideas, was canceled [9] after the police revoked its permit.

In Indonesia, communism and Marxism are considered subversive ideologies and a threat to national security. Any manifestation of support for communism, Marxism or Leninism can be viewed as treason under the amended [10] Indonesian Criminal Law. The law could even criminalize [11] the work of a scholar who writes about communism.

Military officials believe [12] there is a treasonous plot [13] to revive communist groups in the country, but some analysts think the army is only trying to undermine efforts to probe the anti-communist hysteria in 1965 which led to the deaths of hundreds of thousands of suspected communists and their sympathizers across Indonesia.

The military is accused of orchestrating the mass killings [14], which led to the rise to power of General Suharto. For its part, the military claims it only retaliated against attacks instigated by communists.

Suharto banned the PKI and prevented the public from investigating the role of the army in the 1965 killings. Suharto ruled for 32 years until his resignation in 1998.

When President Joko Widodo (Jokowi) won in 2014, human rights groups urged him to give justice to the victims of the 1965 killings.

Reacting to the string of recent arrests, Jokowi asked [15] law enforcement to stop any effort to revive the communist party, but he also urged them to respect human rights and freedom of expression.

The country's cabinet, meanwhile, seems to be divided on the issue. While the defense chief rallies active and retired army officials to help in blocking the revival of communism in Indonesia, the coordinating minister for justice and human rights sees nothing wrong with exploring leftist ideas as long as it's for scholarly research.

For Muslim scholar Akhmad Sahal [16], there is a better way to defeat communism instead of arresting suspected communists:

The best way to DEFEAT communism is by analyzing leftist thoughts. Reviving not the communist party, but critical and scientific mindsets. Because paranoid=closed-minded.

Because of this tweet, he was accused by some netizens of defending communism and betraying his Islamic faith. Sahal then clarified his stance:

I disagree with communism, what I stand for is the right to be smart and to read, including those of leftist ideas. To stop being paranoid.

In Indonesia, it is common to hear officials equating communism and the LGBT community with terrorism. These are often described [20] as concepts that disturb the country's unity and sovereignty. Some Twitter users are against this simplistic mindset:

Marxism won't die because of the threat from [hardline religious group] Islamic Defenders Front [22] (FPI). Marxism will die once it becomes a dogma. Just like the holy books.

Fear of communism, fear of liberalism, fear of LGBT, fear of Chinese and foreign powers: personalities of those with inferiority complexes. Fearing their own stupidity.

There's an effort to fabricate false enemies by reviving the communism issue or LGBT. #stopshacklingthedemocracy

As usual, it's a news pattern. Before it was LGBT, then alcohol, now communism. What comes next? My guess is pornography.