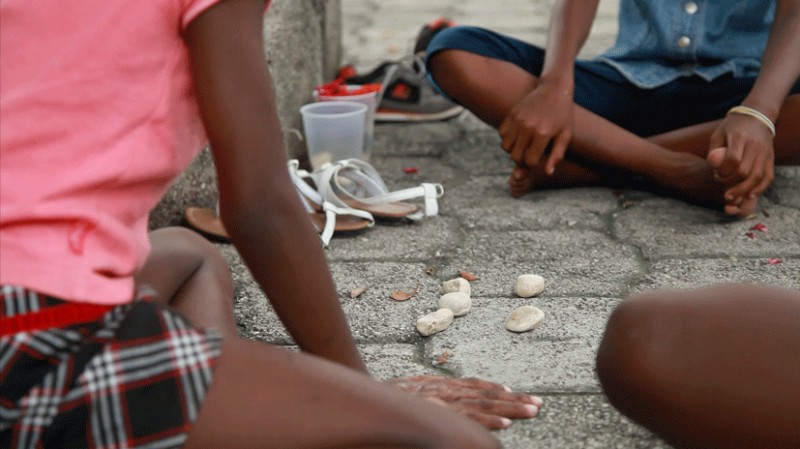 “14 million Child Marriages [globally]…but you've got to play the cards you're dealt.” Photo of stone games in Port-au-Prince, Haiti, by Thinking Development, which supports the work of www.girlsnotbrides.org in trying to put an end to Child Marriage. Image used under a CC BY 2.0 license.

The discussion surrounding child marriage in Trinidad and Tobago continues after the head of the country's Inter-Religious Organisation (IRO) said last week that the state should not amend the Marriage Act because “age did not determine maturity”. Child marriage is still legal in the twin island republic — even though the age of sexual consent was raised last year from 16 to 18 years old — and is still practiced by some Hindus and Muslims.

Many bloggers still couldn't wrap their heads around the contradiction. The blog Square Peg (Round Hole) said:

As a thinking and empathetic citizen of this country, I’m obviously horrified that – in the year of our Lord, 2016 – we need to debate whether it should be legal for children to be married. […]

If the IRO is to have any hope of salvaging itself before the sensible citizens of this nation logic it into oblivion, it needs to completely abandon this archaic and alarming stance immediately.

Identifying herself as “a daughter of Sanatan Dharma” (the major Hindu organisation in Trinidad and Tobago), the blog keepinganemptycup concurred:

The blogger dismissed the rationale of the practice being okay because it was part of the religion's traditions, saying “it is about time Hindu women stand up and say a resounding NO to the actions and policies of this patriarchal system, and this absurd, abusive and archaic law”:

This Sanatan Dharma has survived thousands of years because it has evolved […] This is why it is difficult for me to truly understand how ‘big, hard-back men’, versed in the laws of Dharma, understanding of the progress of the world, can sit from their thrones of ignorance and declare that child marriages are ‘okay’, because ‘we doing it long time…we forefathers used to do it’. Many of our forefathers used to drink puncheon and beat up their wives too, does that mean alcoholism and domestic violence are okay and should be continued?

It just goes to show how much it worries these men that women and girls are no longer filling the roles this patriarchal system has been pinning onto them.

So: I am to understand that in the year 2016 in a secular, democratic republic, the legality, stipulations and recognition of marriage lays squarely in the hands of the religious communities. The state manages matrimony after the fact, but communities of faith act as the primary authorities with regard to setting police and procedure.
Is this really what we’re doing?! Beyond being simply ridiculous domestic policy, I hold this practice to be dangerous. My outrage at this fact is rooted in the fact that we want to be a modern state seen as a bearer of human rights, yet we uphold policies where oppression could easily be hidden. […]

My question to them is: what gives them the right to speak on public policy? Who cares what they have to say? Why does the fundamentally moral and theological conversation taking place among the interfaith community in TT have such marked implications for our legislative sphere?

With the current administration still in consultations over the repeal of the law, it remains to be seen just how much of a voice religious organisations will have in both state and gender affairs.