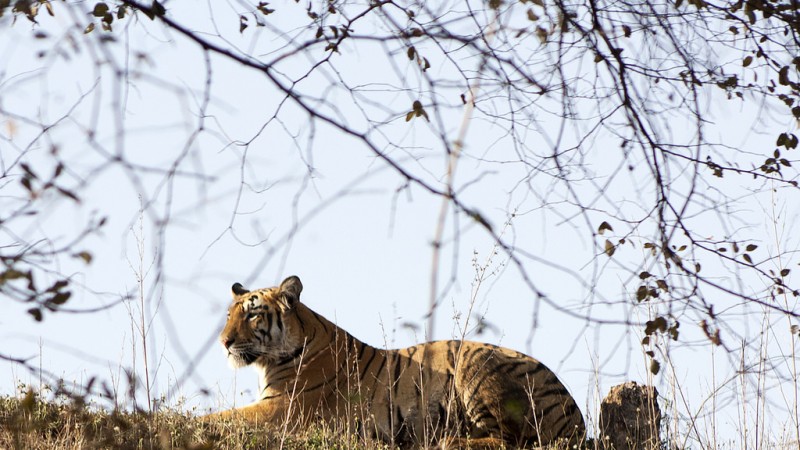 More than a dozen tigers killed in a year – that’s grave news for a country which was hailed for its record third “zero poaching year” for rhinos.

Most of them were poached in and around the Bardia National Park, reported the daily Annapurna Post. Not long ago, the country was celebrating the fact that not a single tiger was killed during the one-year period between February 2013 and February 2014.

Since the poachers take the animal carcass with them, cases of poaching are difficult to track. The whole body of a tiger – from toe nails, skin and bones to the meat – is put up for sale on the international market by the poachers. Only when the petty traders are caught with tiger skins and bones in their possession do the authorities learn that the animals were killed by the gangs behind the illegal trade.

Last year, police caught poachers with tiger skins and bones at different places in the country. Thanks to the concern of authorities, a poacher who was on a run for years after killing Nepal’s first GPS (Global Positioning System)-collared tiger Namo Buddha was arrested. However, the frequent sighting of nomadic Banjara people in western Nepal is a reason for worry for conservationists and security agencies as they have in the past been involved in poaching and illegal trade of tiger parts.

Doubling the tiger numbers by 2022

Though tiger poaching remains a serious problem, the latest census showed that tigers increased in numbers by 63% from the previous census. The last census put the number of tigers at 198.

Tiger populations world-wide are increasing for the first time in 100 years thanks to the rise of tigers in India, Russia, Nepal and Bhutan.

The Government of Nepal along with conservation organisations like World Wide Fund for Nature (WWF) and National Trust for Nature Conservation (NTNC) wants to double the tiger numbers by 2022. That goal isn't such a distant dream if the trend of rising tiger numbers continues, but poaching needs to be curbed.

In 2010, governments of India, Russia, Nepal and Bhutan pledged to double the number of wild tigers by 2022. #wild pic.twitter.com/J2z0ecZzfh

While tiger numbers are increasing, it’s rare to see a tiger in the wild in Nepal. When people do, it's noteworthy — for better or worse.

Journalist Ujjwal Acharya tweeted when his team came across a tiger in Nepal’s Chitwan National Park.

Feeling lucky to see a #tiger during jungle safari in Chitwan National Park on January 1, 2016. Gave us long stare! pic.twitter.com/OA0gn6z28K

In February, news of a Dutch tourist named Gerard Van Laar being saved by a local guide from a tiger that didn’t let him come down from a tree went viral in the mainstream and social media. Van Laar survived by clinging to a tree for two hours as the tiger waited for him below.

#Nepal – Dutch tourist who survived #tiger attack says he is lucky to be alive https://t.co/hWutqCi8kE pic.twitter.com/DUOon9HO8L

The magnificent animals not only fascinate ordinary people, but high-profile celebrities as well. Recently, when the UK's Prince Harry visited Bardia National Park in Nepal, he acted like a tiger, crouching and walking which was captured by a camera trap that help monitor the animals.

Inspecting a camera trap used to monitor tigers. Bardia is home to 50 tigers – up from 18 in 2009 #HarryinNepal pic.twitter.com/BFLmBIL84q

Academy Award winner Leonardo DiCaprio is no exception. He donated US $3 million towards tiger conservation when he visited Bardia National Park.

To fight poaching, conservation organisations have come together to organise awareness-raising activities along the border with India in western Nepal. Besides the efforts of celebrities, conservationists and communities who have been crucial in conserving the striped cats, a recent report of forest cover increasing by over five per cent in Nepal is another silver lining in the cloud.

The coordination between the concerned government authorities, conservation organisations and communities will be crucial if tiger numbers are to be doubled by 2022. And conserving them will in turn be crucial for the ecosystem, which will have an impact on humanity's own survival.